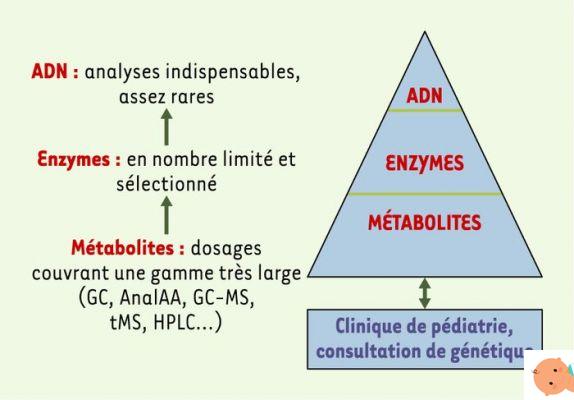 Today, thanks to the extensive newborn screening, performed in all birth points in our country, it is possible to diagnose more than forty different hereditary metabolic diseases in an early way. It is about genetic pathologies caused by metabolic defects which, if not treated properly, can cause serious harm to the baby. We talk about it with the Dr. Giulia Rodella, geneticist of the Simple Operating Unit of Hereditary Metabolic Diseases of the Integrated University Hospital of Verona.

"Hereditary metabolic diseases are a large group of genetic diseases due in most cases to the deficiency of an enzyme that has the task of metabolizing a series of foods such as carbohydrates, lipids and amino acids" - explains Dr. Rodella , who then adds "the enzyme deficiency blocks biochemical processes and ensures that food is not used correctly inside the cells resulting in:

There are hundreds of different genetic metabolic diseases today more than 1000 are known, and their symptoms, prognoses, and therapies vary widely. When taken individually, metabolic diseases are very rare, but when taken as a whole they can strike approximately 1 child for every 800 births.

How inherited metabolic diseases manifest themselves

I symptoms some metabolic diseases can occur already in the first days of life (neonatal forms), but often appear during the first year or later (slowly progressing forms). "Metabolic diseases in the newborn generally manifest themselves with clinical pictures that involve multiple organs and systems and very often they affect the nervous system with consequent delays in neuromotor development "explains Rodella. The most common symptoms are:

La early diagnosis it is essential to avoid major damage to the child, especially from a neurological point of view. Fortunately, today it is possible to diagnose over 40 different metabolic diseases thanks to newborn screening.

Extended neonatal screening is a very valuable prevention tool because it allows for the early detection, that is, before the onset of symptoms, some congenital diseases including over 40 inherited metabolic diseases (organic aciduria, oxidation defects of fatty acids, aminoacidopathies and some defects in the urea cycle).

In our country, with Law 167 of 2022 "Provisions regarding mandatory neonatal diagnostic tests for the prevention and treatment of hereditary metabolic diseases", extended newborn screening has become mandatory: in all Del Paeseni hospitals, newborns can access for free at screening.

How is screening performed?

"Neonatal screening is done by analyzing a few drops of blood taken from the baby's heel between 48 and 72 hours of life"explains Dr. Rodella." The drops of blood are deposited on a cardboard consisting of a special absorbent paper which is then sent to the analysis laboratory where the screening for metabolic diseases, for cystic fibrosis and for the hypothyroidism. "Additional samples are then provided in particular categories of newborns, for example if the newborn has a low weight or was born premature, three samples are required at 48 hours, at 14 and 30 days.

If the test is successful

The positive outcome of the newborn screening it is not the same as a diagnosis of diseasein fact, false positives could also occur. "In case of positivity, the analysis laboratory contacts the reference center for metabolic diseases which in turn calls for the birth point where the baby was born. The parents are called immediately in cases where it is necessary. urgently initiate therapy, while, in case of doubt, the parents are called anyway and then in the day hospital the data observed on the sample is confirmed or not through a plasma sampling "specifies Rodella.

Warning: recall does not mean that the child is sick, only that further investigations are needed.

Early diagnosis, as we said above, allows you to immediately start a dietary and / or pharmacological therapy with an improvement in the prognosis of the quality of life.

Hereditary metabolic diseases are really many and each of them needs a particular therapy. "For some of these diseases, just one may be enough diet therapy and then the child will be taken care of by the doctor and the dietician. In other cases, however, in addition to diet therapy they can be used drugs to help eliminate toxic products, vitamins or enzyme replacement therapies "explains Dr. Giulia Rodella.

Promptly starting therapy with specific treatments is possible avoid the appearance of severe disabilities, even preventing death in the most serious cases

add a comment of Hereditary metabolic diseases: from diagnosis to therapy