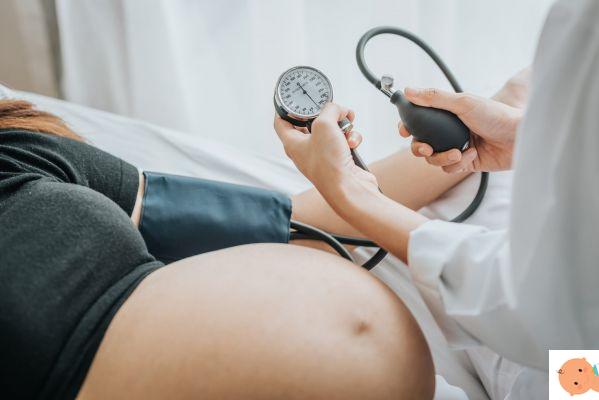 In fact, if low blood pressure in pregnancy can be considered physiological, high blood pressure certainly cannot be, due to the risks it can entail for mother and baby.

There is talk of chronic hypertension when the condition of hypertension was present already before pregnancy, so much so that perhaps the woman was taking specific drugs to combat it. In some situations, however, the woman may never have noticed this simply because she has not recently checked her blood pressure.

In these cases, chronic hypertension is diagnosed if it occurs before 20 weeks of pregnancy. According to the latest guidelines of the Del Paesena Society of gynecology on the subject (published in 2022), moreover, for this diagnosis it is necessary to find high pressure values ​​in more than one measurement after at least 4-6 hours.

Chronic hypertension can be controlled during pregnancy with specific drugs: ace inhibitors and angiotensin II receptor antagonists are certainly contraindicated, while drugs such as labetalol, nifedipine and methyldopa can be used.

L'chronic hypertension it can be associated with various obstetric complications if it is not properly controlled (which can be achieved with medication). These include, for example, premature birth, growth retardation, intrauterine death, placental abruption and caesarean section. However, the possibility of these events seems to be related to various factors such as:

In case of chronic hypertension, pregnancy is considered pathological and checked more frequently than one physiological pregnancy (low risk).

Read also: Hellp syndrome in pregnancy: what it is, how it manifests itself, how to intervene

Preeclampsia is the most severe form of hypertension that can occur in pregnancy: it usually appears after 20 weeks of gestation associated with proteinuria, i.e. the presence of protein in the urine (levels above 290 mg / l). Preeclampsia can:

Unfortunately, the symptoms are very vague. The main ones, which must make us suspect the condition, are precisely upper blood pressure a maximum of 140 and a minimum of 90 after 20 weeks and the presence of protein in the urine. Sometimes they can appear nonspecific symptoms, as

For the mother, the complications of preeclampsia can range from bleeding disorders to generalized organ damage, to evolution in eclampsia, which manifests itself with seizures, loss of consciousness and in some cases brain haemorrhages. For the child, the main risks are those of growth retardation or arrest, in addition to the risks of a premature birth: when preeclampsia occurs, in fact, the only possible solution to resolve it is childbirth.

Unfortunately, there are no drug solutions: the only way to stop preeclampsia is to stop pregnancy. In other words, the therapy is childbirth, which can however expose the baby to risks, if it is very premature.

add a comment of High blood pressure in pregnancy