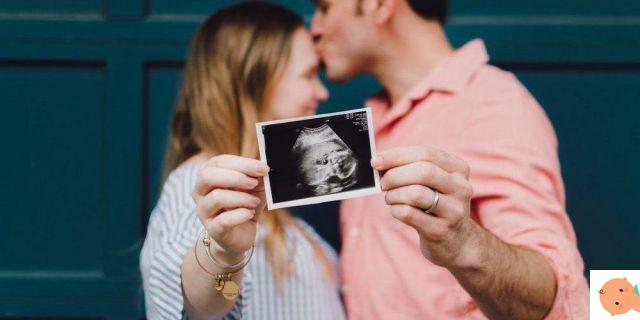 I feel nauseous. The fault of the hormones. I feel like crying. Hormonal storm. I'm very nervous. Always cause them. I can not sleep. Guess whose responsibility it is! Who knows how many times during pregnancy you took it out on them. Always and only with hormones. Although they are so "mistreated" by expectant mothers, they actually play a very important role during gestation and, in some cases, even before, during conception. What hormones are involved and what are they for? They are many with different functions. Let's consider the main ones.

We obviously start from the "king" of hormones in pregnancy, beta hCG. Actually, human chorionic gonadotropin is a fraction of a hormone that is produced by pre-embryonic cells. With the passing of the weeks of pregnancy these give life to the placenta: it will then be this to secrete the beta hCG.

The body starts producing beta hCG about a week after conception. The most important function is to stimulate the corpus luteum to produce large quantities of progesterone, another hormone essential for the good progress of gestation and which we will discuss shortly.

It is the beta hCG hormone that causes the pregnancy test to turn positive. It is found in both urine and blood (here it appears first). In the blood, the concentration is higher and it is for this reason that this is the most reliable test: beta hCG are not always in sufficient quantity to be detected in the urine. In a non-pregnant woman the concentration ranges from 0 to 5 mIU / ml (milli International Units per milliliter of blood). Above 5 it is probable that the pregnancy has begun, but the certainty is surpassing 25 mIU / ml. Beta hCGs grow a lot in the first trimester of pregnancy, around the 13th week of pregnancy. Then they decrease and remain stable until delivery.

Progesterone plays a vital role even before getting pregnant. In fact, a non-optimal level can have repercussions on fertility, sometimes complicating the path towards motherhood. Depending on the period of one's life, progesterone is produced by various organs: the adrenal gland, the corpus luteum and the placenta.

During the menstrual cycle, the progesterone level changes depending on what stage you are in. For example, it is very low in the follicular one, while it grows near ovulation. If fertilization occurs, the quantity increases to favor the good implantation of the embryo in the uterine walls. If it does not occur, progesterone decreases, the corpus luteum disappears and menstruation arrives.

This hormone is present throughout pregnancy and its level must remain high. When it goes down it can be a sign of something wrong, for example in the event of an abortion threat. In fact, progesterone has the main task of supporting the entire gestation, ensuring the engraftment of the embryo in the uterus. In addition, it is able to reduce the contractions of smooth muscles, including that of the uterus. Finally, it feeds the blood vessels of the endometrium for optimal growth of the fetus and stimulates the breast to produce milk.

Read more: Progesterone in pregnancy: what it is for

Another class of hormones present during pregnancy is that of estrogen, which are the main female hormones responsible for the development of sexual characteristics. Perhaps they are talked about a little less than the others we have written about so far, but that does not mean that they are less important. A key role in pregnancy is for example to stimulate the production of progesterone and other hormones.


Estrogen also contributes to the correct development of the baby and in particular to that of some fundamental organs, such as the lungs, liver and kidneys. The proper functioning of the placenta also depends on the circulating amount of these hormones. Estrogen is involved in the enlargement of the uterus to make room for the growing fetus and breasts and in the development of the mammary gland, which will then serve after delivery while breastfeeding.

Another role played by estrogens concerns the so-called tropism of the mucous membrane of the genitals. These hormones lead to an increase in vascularization and stimulate the production of collagen which makes the mucosa more elastic. They also improve vaginal lubrication. This explains why during menopause, when there is a substantial drop in estrogen, many women complain of vaginal dryness problems, with consequent problems even in sexual intercourse.

As its name already suggests, this hormone helps to relax muscles, ligaments and joints, especially in preparation for childbirth. Its production begins already during the first trimester of pregnancy and is very useful for creating the right environment for the baby, as well as for ensuring the well-being of the mother.

Relaxin belongs to the same hormone family as insulin and is present in both sexes. In women it is produced by the ovaries and breast, while during pregnancy by the placenta and the basal decidua (mucosa of the uterus). In the first part of gestation, together with progesterone, it prepares the maternal body to welcome the embryo. In the third quarter, however, it plays an equally important role. Close to childbirth, it causes the cervix to thin and dilate, fundamental stages for the birth of the baby.

It also appears that relaxin is able to relax the ligaments at the front of the pelvis to facilitate childbirth.

You may have never heard of it, but placental lactogenic hormone (HPL) is also one of those typical of the period of expectation. It is detectable starting from the sixth week of pregnancy, it has an increasing trend throughout gestation to reach a peak around the 34th week. The value can be a bit higher when expecting twins.

The placental lactogen hormone is directly connected to the well-being of the fetus because the proper functioning of the placenta from which the baby gets its nourishment depends on its quantity. Low levels of HPL in the mother may therefore be linked to a risk of intrauterine growth retardation or perinatal death.

Also, as its name indicates, this hormone is used to prepare the mammary gland to produce milk once the baby is born. It also appears that there is a correlation between the onset of gestational diabetes and HPL. The latter in fact interferes with the action of insulin by canceling it. In women who are predisposed, this interference is particularly strong and the consequence is the pregnancy-related form of diabetes.

Although it begins to be produced in greater quantities during gestation, prolactin has a basic role after giving birth. In fact, it contributes to lactation, or the production of breast milk. During the development of girls it is prolactin, together with estrogen, which causes the breasts to develop. During gestation, on the other hand, it acts on the mammary gland.

Through the action of hormones, the breast prepares for breastfeeding throughout pregnancy. The prolactin level therefore increases progressively from the start. It is responsible for the production first of the colostrum (the first drops of milk, extremely nourishing for the newborn) and then, after the milk is whipped, of the actual milk.

In the conception phase, prolactin could be monitored because its incorrect level (by excess or by defect) could be the cause of menstrual irregularities and various types of disorders, up to infertility.

Oxytocin: the hormone of childbirth and lactation

Oxytocin is a hormone that is produced by the hypothalamus and plays two very important roles. First, during labor it causes contractions which, in turn, allow the baby to be expelled. While, as we saw earlier, relaxin promotes dilation of the cervix, oxytocin causes the uterine muscles to contract, allowing the baby to descend into the birth canal and be born.

The other fundamental aspect concerns breastfeeding. In fact, oxytocin stimulates the cells of the milk ducts and favors the ejection (ie the jet) of the milk and, consequently, the suckling of the baby. As the baby suckles, the uterus contracts. This is important immediately after giving birth to get everything back to normal.

Synthetic oxytocin is among the methods used to induce childbirth, along with prostaglandins (they are other hormones. They are also found in man's sperm and it is for this reason that at the end of pregnancy it is recommended to have full intercourse to try to start the labor). Oxytocin is given to pregnant women to speed up labor. In this case, the contractions are quite painful.

This hormone increases sexual desire and empathy, which in turn stimulates attachment to the baby immediately after delivery.

"Side Effects" of Hormones in Pregnancy

We have seen what hormones are used for in pregnancy and what their most important functions are. Their circulation within the body, however, can cause some effects which, ironically, we have defined as collateral because they could cause some discomfort. An example is nausea. In fact, it seems that there is a correlation between the amount of beta hCG and what is one of the typical disorders of pregnancy. This hormone grows significantly in the first trimester, which is when nausea and vomiting are most common.

Hormonal changes also underlie other phenomena, such as nervousness, headache, insomnia or changes in hair and skin. Both tend to improve, with thick and luminous hair and a rosy and healthy complexion. But it is also true that sometimes the opposite happens, with brittle and dull hair, oily skin, pimples and spots (have you ever heard of melasma? It is a skin hyperpigmentation that presents itself with darker areas, for example on the cheekbones).

Progesterone, as we have mentioned, reduces muscle contractions. The drawback is that in this way also peristalsis, that is the bowel movements that lead to evacuation, decreases and constipation could occur. How to fight it? Lots of fiber, whole foods, lots of water and some exercise.

Estrogen can also have some side effects, such as water retention or breast tightness. But you don't have to worry at all: these are all passing things that will not ruin your pregnancy and will disappear without a trace. It just takes a little patience and still enjoying the baby bump.