Hormones of pregnancy: what they are and how they work 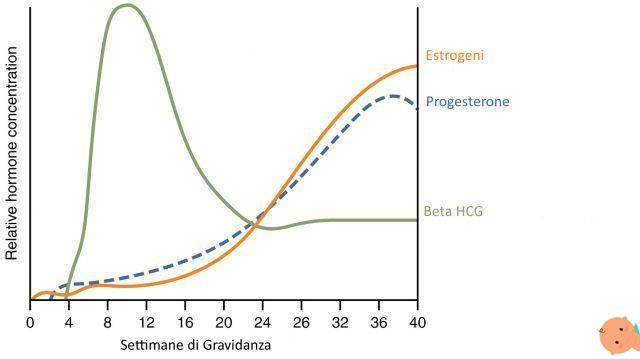 Pregnancy involves noticeable changes in the female body. Not all changes are visible, but even those that we cannot observe can have a heavy influence on the progress of the pregnancy itself and on the state of well-being (or relative malaise) of a pregnant woman. This is what happens in particular following theaction of hormones, absolutely essential protagonists of the long path that leads to becoming mothers.

Let's see what you need to know on the subject, starting with information from yourhormones.info, an educational resource from the UK Society of Endocrinology.

A hormone is a chemical produced by specialized cells that are typically located in an endocrine gland and released into the bloodstream to send a message to other parts of the body.


Indeed hormones are also called chemical messengers and together constitute a effective communication system between cells located in distant parts of the body. Once it reaches the target cells, the hormones change their behavior. Insulin, for example, after being released from the pancreas prompts muscle and fat cells to store glucose from the blood.

During pregnancy, the correct balance between the various hormones involved, produced at first by the ovaries and, subsequently, by the placenta: in fact, they maintain the right conditions so that everything ends in the best possible way for both the mother and the baby.

The very early stages of pregnancy

Hormones come into play from the very first moments of pregnancy: it is in fact the human chorionic gonadotropin which, triggered by the fertilization of the egg, "alerts" the body to prepare for pregnancy. On the other hand, it is obvious that, immediately after conception, the embryo must be able to communicate its presence to the maternal organism, so that it can "organize" itself accordingly.


Chorionic gonadotropin can be detected in the urine as early as 7-9 days after conception, and is the hormone identified in the pregnancy test, starting with the common do it yourself test which you can buy in a pharmacy or supermarket. He is also partly responsible for the frequent urge to urinate that pregnant women often experience as early as the first trimester of pregnancy: this is because the increased levels of gonadotropin cause an increase in blood supply to the pelvic area and kidneys, which in turn are activated to produce more urine.

However, the main task of chorionic gonadotropin is another, and that is to regulate the levels of two other fundamental hormones in pregnancy: estrogen and progesterone.

Pregnancy, the role of progesterone

High progesterone levels are required throughout pregnancy. In the first weeks of waiting, progesterone is produced from dirty body, a temporary endocrine gland that arises from remains of the ovarian follicle after her rupture, and allows for a normal course of pregnancy.

In particular this hormone:

Once the placenta is formed, the latter will produce progesterone by converting the cholesterol present in the maternal blood (to take care of it is a particular type of placenta cells called trophoblast). Between the sixth and ninth week of pregnancy the production of progesterone passes completely from the ovaries to the placenta, and at this point the progesterone is enriched with new tasks:

The role of estrogen

All these very important activities carried out by progesterone, however, require estrogens which stimulate both its production and functionality.

Estrogen is also produced first by the corpus luteum and then by the placenta or, better, by what specialists call fetal-placental unit. In practice: the fetus produces a hormone called estriol which, after passing to the placenta, is transformed into other estrogens.

Levels of these hormones also rise until birth and their effects are different:

Other hormones produced by the placenta

The placenta also produces other hormones that are responsible for regulating the various functions of both the mother and the baby on the way.

Placental lactogenic hormone: its function is not yet fully understood, but it is thought to help promote the growth of the mammary gland and regulate the mother's metabolism by increasing the level of nutrients present in the blood, so that they can be used by the fetus.

Read also: Breastfeeding: your questions and the answers of the experts

Corticotropin releasing hormone: contributes to the maintenance of pregnancy, to a temporary suppression of the maternal immune system so that it does not attack the fetus, to the improvement of blood exchange between the fetus and the placenta. Its production increases when the mother, especially in the first trimester, is subjected to stress.

In the last few weeks of pregnancy, corticotropin-releasing hormone levels rise further, along with those of the hormone cortisol: a rise that promotes final maturation of the fetal organs before childbirth and influences when it starts.

The rise in cortisol levels has been associated with a more careful care of the newborn by the new mother, which probably contributes to the formation of bonding.

Side effects of pregnancy hormones on the mother

High levels of progesterone and estrogen are important for pregnancy, but they can also cause some (small) side effects of this moment, such as mood changes which can especially characterize the first weeks of expectation, when the maternal organism is still getting used to the endocrine changes in progress.

Typical pregnancy sickness may also have a hormonal cause, although it has never been definitively clarified what causes it. At stake could be changes in the levels of estrogen, progesterone and a thyroid hormone (TSH), but also the presence of chorionic gonadotropin.

And again: many women already experiment in the first trimester pain or discomfort in the pelvis or lower back. It could depend on the relaxin, a hormone produced from 7-10 weeks of pregnancy and then throughout the nine months with the function of relaxing muscles, joints and ligaments to make room for the baby. Relaxation of the pelvic joints, however, can lead to discomfort or pain. And relaxin could also play a role in the onset of constipation, experienced by many expectant mothers.

The hormones of labor and delivery

Playing a fundamental role in this moment is theoxytocin, also called the love hormone primarily because it appears to be associated with feelings of bonding and maternal tenderness (as is another hormone released during labor called prolactin). Oxytocin levels begin to rise early in labor, causing regular contractions of the uterus and abdominal wall.

If childbirth is to be induced, it is oxytocin (or its synthetic equivalent) that is administered to kick-start the process.

But oxytocin also has another role and that is to promote, along with other hormones, the dilation of the cervix (or neck of the uterus), which generally must reach about 10 centimeters to allow the passage of the head of the unborn child. Among the hormones that contribute to this dilation there are also the prostaglandins and relaxin.

As the labor progresses and the contractions become more and more intense, the release of also begins endorphins, hormones that act as natural pain relievers and can also induce feelings of euphoria and happiness. And when the baby's arrival is imminent, the mother's body releases a large amount of adrenaline and norepinephrine, which lead to a "rush" of energy for the mother, who with a few more intense thrusts finally gives birth to her baby.

After the baby is born, oxytocin continues to promote contraction of the uterus, promoting the afterbirth (i.e. delivery of the placenta) and reducing the risk of excessive bleeding and postpartum hemorrhage.

The elevated levels of oxytocin and prolactin (also stimulated by the first skin-to-skin contact with the baby and by the mother-baby eye contact, which for the first time in nine months make eye contact) encourage bonding.

Furthermore, oxytocin, prolactin and endorphins explain the feelings of euphoria experienced by some mothers immediately after giving birth.

Furthermore, hormones also play an essential role in breastfeeding. It is the immediate drop in progesterone and estrogen levels after delivery of the placenta that induces the production of colostrum, the first breast milk rich in proteins, salts and vitamins. The release of oxytocin and prolactin, on the other hand, is stimulated by the baby's sucking on the nipple and in turn stimulates the production of milk and its release through the milk ducts respectively. Read also: Bonding mom and baby: 6 ways to promote it

add a comment of Hormones of pregnancy: what they are and how they work