House cleaning during pregnancy: should you stop doing it? 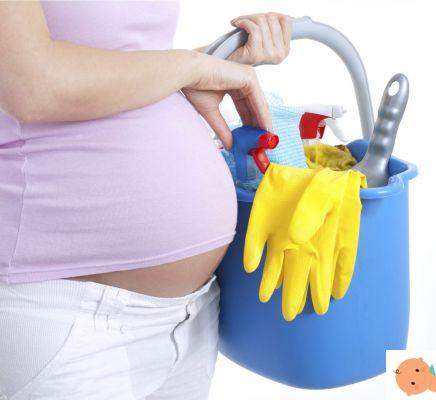 The commonplace about sex in pregnancy has been dispelled - having sexual intercourse during gestation is not associated with adverse events - here we try to clarify another commonplace related to the months of expectation: a pregnant woman should stop dedicating herself to cleaning her home?

We asked the midwives Ada Mellea and Grazia de Rosario of the Meyer Hospital in the city.

Is it true that there are things that can be done and others not?

"Pregnancy is not a disease" they say first of all. "Of course, a woman's organism changes during pregnancy and she has to adapt to the changes, but they are physiological changes. In short, the pregnant woman is not sick." She can therefore continue to share the care and cleaning of the house with her partner "by adopting a series of precautions which, after all, are valid for the entire population, such as avoiding toxic inhalation of detergents".

That said, "it is preferable that a pregnant woman does not climb the ladder to clean the windows or the chandeliers, with the risk of falling and incurring fetal damage, head trauma, femoral fracture ...".

After all, as we read on Physiological pregnancy guidelines, it is common sense to indicate that the physical and morphological changes that occur in pregnancy can interfere with a woman's ability to engage in some forms of physical activity, and that physical activity that involves excessive effort should be avoided, a considerable physical exertion, the risk of abdominal trauma and falls.

It should also be borne in mind that the increase in weight and volume of the uterus causes a series of changes in the weight distribution and balance of the pregnant woman, and especially in the final part of pregnancy the extra pounds can be felt with greater fatigue. . The advice therefore is not to "overdo it" and get tired.

But, if the pregnancy is physiological, there is no point in recommending the suspension of physical activity. On the contrary: starting or continuing moderate physical activity, such as swimming or walking, is not associated with adverse events.

Detergents, do you need some extra precautions?

Detergents are known to pollute. From a study published in the journal Science, for example, it emerged that commonly used household cleaning products (degreasers, solvents ...), personal hygiene, pesticides ... emit chemicals ("volatile organic compounds" or voc) which by evaporating contribute to the formation of fine dust, therefore to atmospheric pollution.

While a study published in the American Journal of Respiratory and Critical Care Medicine found that most chemicals in cleaning products cause mucosal irritation in the long run that line the airways, damaging the airways over time.

According to midwife Ada Mellea, it would therefore be a good idea, even more so if pregnant, "to wear gloves when cleaning the house and why not also a mask to avoid skin irritation (considering that the skin tends to be more sensitive in pregnancy) and inhaling toxic substances. And opening the windows during housework to prevent pollutants from stagnating in the house ".

Mopping floors and cleaning bathrooms: does it really hurt? And can vacuuming cause contractions and premature birth?

Meyer's midwives are reassuring: "absolutely not" they say. "Household chores, such as mopping floors or vacuuming, are not dangerous and are not contraindicated due to the risk of contractions or preterm labor." "Obviously - they add - they are not indicated in the case of a medical diagnosis, such as the onset of placental abruption, and if the woman has been instructed to stay in bed as much as possible".

In general, however, in case of low placenta, blood loss, threat of preterm birth and other doubts, it is better to discuss with the gynecologist who is following the birth path.

Is it really only necessary to rely on natural cleansers?

As we said, the products used for cleaning the house contribute to worsening the quality of the air we breathe inside (and outside) the home, so it is preferable to ventilate the rooms during their use but, as suggested by the National Federation of the Orders of Surgeons and Dentists (Fnomceo), to limit indoor pollution, we should use natural remedies such as Marseille soap, vinegar, bicarbonate.

"Or at least - add Mellea and de Rosario - do without the more toxic and aggressive products such as bleach, ammonia and muriatic acid".

What if we don't have anyone who can help us?

"Pregnancy is not a disease, but a moment in which to take better care of oneself" they conclude, suggesting to the reader to "also learn to turn a blind eye". Their final message, however, is to "not medicalise the pregnancy too much, unless the doctor recommends absolute rest to safeguard the health of the pregnant woman and the fetus".

How to improve the air in our home?

Is the perfume an indicator of cleanliness? No

Clean has no smell. So do not exceed with the use of cleaning products such as detergents and detergents, with deodorants and perfume diffusers, incense and scented candles. And for daily cleaning prefer the use of baking soda and vinegar.

Do you need to read the labels? Yup

Before use, always read the labels, respect the quantity indicated and use the measuring cap.

Mix the products? No

Because it can be dangerous, especially those containing ammonia or bleach with acidic substances such as limescale removers.

Is it necessary to change the air? Yup

It reduces the presence of pollutants. It is preferable to open the windows further away from the busiest streets. Remember to do this when cooking (also open the hood), cleaning, washing, ironing.

Pregnancy by the Ministry of Health

The guidelines on physiological pregnancy

Doctor, but is it true that ... Do closed environments protect children from pollution?

The air in our home: how to improve it? Brochure of the National Institute of Health

TAG:
Spring cleaning: how to get help from the little ones ❯

add a comment of House cleaning during pregnancy: should you stop doing it?