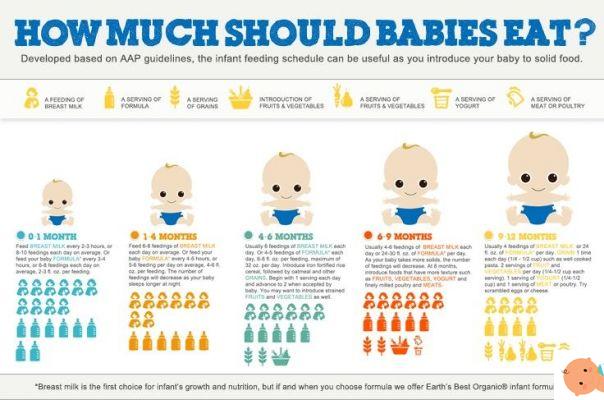 During the first few weeks of life, the young can discharge even several times a day, And the disastrous they change according to their diet (breast milk or formula).

Read also: Feces of the newborn: the meaning based on color

The first stools emitted as a newborn are called meconium: the latter contains the substances that were present in the intestine during the period of pregnancy which are mostly made up of mucus and amniotic fluid. It is important that meconium is emitted in the first 24 hours of a newborn's life: a delay in this event could be a sign of problems such as intestinal slowdown or blockage.

How often does a breastfed infant discharge

I breastfed babies they can issue I did after each feeding, or vice versa, they may not evacuate even for a week - both cases are perfectly normal.

Read also: The baby hasn't pooped for three days, what should I do?

If the infant is fed with artificial milk o has started eating solid foods, it is normal to evacuate three times a day to three times a week.

The evacuations in the first days of the newborn

What if the baby does not discharge every day?

Sometimes, new parents are amazed at how much feces a baby can produce: a breastfed baby, in fact, can also discharged after each meal, and this is normal. This is one of the signs that the baby is feeding properly. If a baby does not have a bowel movement every day in the first few weeks, it could be a sign that he is not feeding properly, and that he needs to eat more or that there is some problem with breastfeeding.

After a few weeks, however, it can happen that the frequency of evacuations is greatly reduced, up to once a day or once every two / three days.

If, on the other hand, you begin to exceed three / four days or even more and the child appears restless, uncomfortable, with malaise, it may be that he is struggling too much expel his stools In this case, a light one is enough tactile stimulation of the area around the anus, for example with a tube, a micro-enema with delicate products.

Other sources for this article: English National Childbirth Trust Brochure;

Healthychidren.org: Pooping By the Numbers

Read also: Constipation in the newborn and in the child: remedies and advice

When to change a baby's nappy?

The diaper should be changed every time the baby poo and always before putting him to sleep for the night. If your dog is in the habit of giving it immediately after eating, wait until the end of the feed to change it.

When is a newborn to be considered constipated?

Pediatricians speak of constipation when a newborn who does not evacuate for 3 to 4 days is disturbed, crying, forcing, and experiencing pain during evacuation.

Weaning changes the production and consistency of the faeces, the smell becomes more intense and marked with the days.