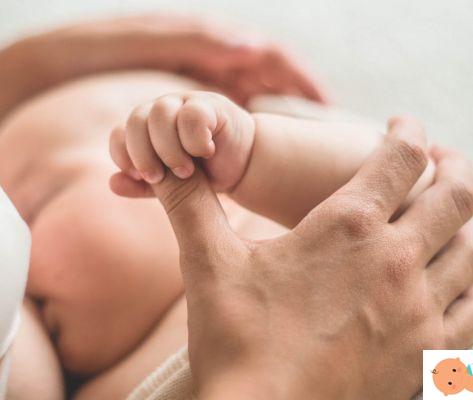 How much milk should a newborn drink?

This is one of the biggest concerns of new parents: Will the child have eaten enough? But how much milk should a newborn drink?

How do you know if you are eating "the right"? Here are some useful tips to help you feel more confident on this issue, whether you are breastfeeding or feeding your baby with formulated milk.

Taking into account that the sucking reflex in the newborn it is a primary instinct, that each child is unique and there are no universal recipes, valid for everyone, and that in case of doubt you can contact the pediatrician or a figure specialized in breastfeeding (obstetrician, pediatric nurse, consultant ...), even in a clinic.

Breastfeeding: How Many Feedings A Day?

It is now well known that rigid timetables should not be imposed at breastfeeds. As the pediatricians Alessandro Volta and Ciro Capuano recall in the book Breastfeeding explained to fathers, "it is useful and healthy that the baby can suck freely when he thinks he needs it; there is no need to observe a minimum interval between one feed and another".

This is also because, you know, milk comes while breastfeeding, so it is especially important in the first weeks not to thin the feedings too much to "set" the level of milk production by the mother.

In fact, this can mean on average 8 to 12 feedings per day, but there are children who reach 15 (about one every hour and a half). Volta and Capuano explain that some babies like to suckle for short periods very frequently, while others reduce feedings and make them last longer. And some tend to breastfeed so infrequently that parents wonder if they shouldn't wake them up to offer them the breast.

"Again there is no one-size-fits-all answer," he stresses Chiara Losa, IBCLC consultant who works in the breastfeeding clinic of the Buzzi hospital in our city. "In general, it can be said that if during the day the baby is able to show clear signs of hunger and the mother is able to satisfy his requests, it can take four or five hours to pass before attacking him again. However, if the little one is not very skilled immediately to show these signals or it is a lot sleepy it may be appropriate to wake him up every two / three hours ".

Read also: Breastfeeding: the role of the father

How long for each breast?

Another classic question: how long should it stay attached to each breast? And it is always necessary that at every meal it sticks to both? According to Volta and Capuano there are no fixed rules even in this regard: "Someone prefers to use only one breast (and at the next breastfeed the mother will alternate it), others like to continue breastfeeding passing to the second breast, perhaps after a short contemplative break" .

How much do you eat a day?

It is very difficult to make an exact quantification of the milk ingested on a day-to-day basis by a breastfed baby. As the WebMd website points out, "the exact amount of milk your baby drinks varies all the time. For example, he might want more if he's going through a growth spurt."

Or he could drink more often, but for shorter times, during the summer, when it is warmer, to favor the intake of the "first milk", which is less fat and more thirst-quenching. The important is to trust in its ability to determine how much food it needs.

Read also: Growth spurt: what it is and how to deal with it serenely

Formula breastfeeding: how many feedings per day?

Anyone who uses formulated milk knows: on the product packaging there are recommended quantities based on the age and weight of the child. But be careful: as Ferrando points out, it is good to remember that it is about medium doses, which for some are exaggerated and for others insufficient. "Not all babies need the same amount of milk."

As an example, however, we give a classic scheme, for number of meals:

In recent years, the idea has been gaining ground that even in the case of infant formula feeding, the baby can be fed on demand. A guide to infant formula published by the Veneto Region on the basis of documents from the English Health Service, the Documentation Center on Perinatal and Reproductive Health of Emilia of the city and the then birthplace of Vipiteno states for example that:

The baby can be fed on demand. He will thus understand the feeling of hunger and satiety and will learn to regulate his need for food. This is important for his subsequent relationship with food, reducing the risk of developing overweight and obesity.

Also Ferrando, in his book, writes that "the bottle, as well as the breast, is given on request, both for the time and for the quantity". And he continues: "We must respect the sense of hunger of the child and child-to-child diversity. The little one, with rare exceptions, will eat as much as he needs and will stop when the necessary amount of food has been reached ".

And of the same opinion are Volta and Capuano, who recommend:

How to know if the baby is hungry

Even from very young, practically as infants, children know how to manifest hunger, with very precise signals, the so-called signs of hunger. Here they are:

How to know if the baby is full

Other signs unequivocally communicate that the baby is full and, especially if you are using a bottle, there is no need to insist:

How to know if your baby is eating enough

Once the method used to understand if the baby had eaten "the right" was that of double weighing, which consisted of weighing him before and after feeding to check how much milk he had taken, but today strongly discouraged by many pediatricians. According to Ferrando, for example, it is a harmful and useless method.

Harmful because "it falsely suggests that there is an ideal quantity of milk to be taken, creating anxiety and insecurity in the mother who can experience the moment of weight control as an examination, an anxious test".

Useless because the important thing is the child's state of well-being, which can be assessed on the basis of other parameters. Here are which ones:

Read also: The feces of the newborn, everything you need to know

How to know if your baby is not eating enough

There are also signs that your baby's nutrition is not optimal. Here's when to contact your pediatrician according to the directions on the WebMd site:

In this video the pediatrician, Dr. Maurizio Alagna, answers the doubts of mothers about infant feeding.

How much should a baby eat, how to tell if he has eaten enough. How many hours to breastfeed?

How much does a baby eat a day?

There is no universal answer because it depends on so many factors. She may have a growth spurt and therefore feed more, but also be summer and therefore need more hydration.

Will the child have eaten enough?

Each child is unique and there are no universal recipes. In case of doubt, you can contact the pediatrician or a figure specialized in breastfeeding (obstetrician, pediatric nurse, consultant ...), even in a clinic.

Does the baby have to latch on to both breasts at every meal?

It depends: there are those who alternate one breast with a breastfeed, the other breast the next breastfeed and who during the same feeds from both.

TAG:
How much weight should a baby gain per week? ❯

The tint while breastfeeding

add a comment of How Much Should a Newborn Eat?