How old is your dog "human"? 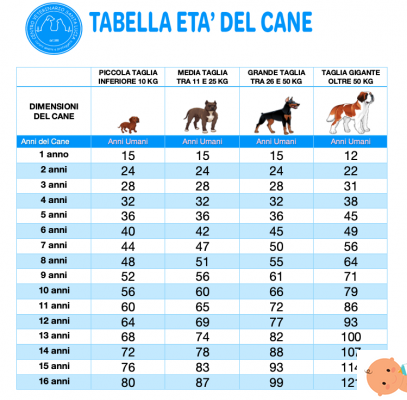 Anyone who has a dog has done so at one time or another: multiply the age of your pet by seven to find out what "human" age it corresponds to. In reality this conversion - probably based on the consideration that, globally, the average lifespan of a dog is around 10 years while that of a person around 70 - is rather approximate. Now, however, a group of American researchers has developed a new formula to carry out this conversion, in a much more scientific way.

The field of study is that of biology of aging, which seeks to understand the biological basis of this phenomenon. For some years now we have begun to talk about epigenetic clock, to mean the set of particular chemical modifications that accumulate on the DNA molecules over time. To be precise, it is the so-called methylation, that is the addition of chemical groups called methyl groups, which are placed as signaling flags in correspondence with certain DNA sequences. The function is to regulate the expression of genes, that is, whether they are turned on or off.

Beyond the technical details, the important thing is that it has been understood that, at least in humans, over the years these flags accumulate, to the point where it is possible to convert a person's DNA methylation status into an estimate of his age with some accuracy. And since it seems that dogs (like other animals) also have a biological clock of this type, a group of researchers coordinated by Trey Ideker The University of San Diego decided to investigate the matter and find any similarities and differences to the human clock.


Ideker and colleagues specifically focused on one one breed - labrador retriever - analyzing the DNA methylation status of a hundred specimens between four weeks and 16 years of age. They thus found that actually the rate of methylation - that is, the addition of flags - increases with age in a very similar way between dogs and humans and that this flag addition affects roughly the same sets of genes. On the basis of this information they finally obtained a formula that allows the conversion between canine and human age:

This is a rather complicated formula - here are some conversion examples.

As you can see, we are quite far from the multiplication by seven rule, but we also see that dogs reach maturity very quickly, already in the first year, and just as quickly reach middle age (between 2 and 4-5 years). Then they move on to a long period in which in practice they correspond to old men and clumsy gentlemen.


The study, we have seen, was conducted with Labradors, but other researchers who are part of the so-called Dog Aging Project are trying to do the same with different breeds, to understand for example why some have one less longevity than others.

Children and dogs, the most beautiful photos

Growing up with a dog is a great opportunity for a child. But the presence of parents is always necessary, especially in the early days, to avoid ...

TAG:
How many days after the expected date of delivery can you give birth? ❯

Cats and babies, myths to dispel and useful information

Dogs and children, 6 myths to dispel and useful tips

How to choose the house dog?

Dogs and children: how to get them to get along?

add a comment of How old is your dog "human"?