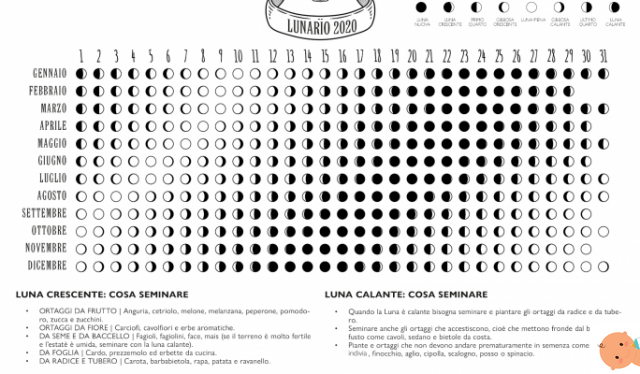 Does the lunar calendar affect childbirth and the sex of the baby? For many centuries people have faithfully believed in the power of the moon, especially for the DPP calculation - presumed delivery date that was once not monitored and anticipated by the gynecologist from the first visit, but was evaluated based on different signals, not always completely scientific. Yet the charm of the moon and its incredible power such as that of influencing the tides (as reported in the study "Tides and the evolution of the Earth — Moon system" published in the Geophysical Journal International) or to mark the cycles of peasant life in once it never ceases to strike. The study "The effect of the lunar cycle on frequency of births and birth complications" published in the National Center for Biotechnology Information tried to unravel the mysterious connection between lunar cycles and births, to understand how to do the birth date calculation based on the moon (and if there really was a reliable and systematic rule). This correlation, at least scientifically, does not exist. However, popular beliefs in pregnancy resist time and scientific evolution and, despite everything, it can be consoling to look for an answer in the lunar motions especially in the last days before giving birth, those that usually are heavier for the family (and the mother). ) pending.

So let's see how to calculate the date of birth with the phases of the moon, it being understood that the DPP and the weeks of pregnancy calculation can be carried out in an almost mathematical way, especially if the cycle is regular and the date of the last menstruation is known.

Birth date calculation based on the moon: how it works

At the heart of the belief that the moon affects childbirth is the moment in which it is in its fullness. There full moon has always been at the center of this theory: in fact, the pregnant woman just needs to have a calendar in front of her and circle the day when the moon becomes full to check when the birth will take place. Obviously, the ninth full moon starting from the date of conception (and also the days of the waxing moon) to identify the likely days in which the baby will be born.

Although the cycles of the moon have been proven to influence the sonno of people as we read in this study (Evidence that the lunar cycle influences human sleep) published on the website of the National Center for Biotechnology Information, the theory according to which the moon, influencing the tides and its motions, could also influence that of the amniotic fluid in which the child is immersed. The recent study "The influence of lunar cycle on frequency of birth, birth complications, neonatal outcome and the gender: a retrospective analysis" also reported by the National Center for Biotechnology Information confirmed that there are no correlations, although the perception is that " more children are born during the waxing or full moon. "

The calculation of the date of birth through the phases of the moon was also crucial in the past to find out in advance the sex of the baby. It was a time when ultrasound scans did not exist and were not yet a valid diagnostic tool for assessing the health of the fetus: discovering in advance whether it would be male or female was therefore a completely human curiosity, which could not find an answer elsewhere if not in the signs of nature.

According to the lunar calendar also the phase of the moon at the time of conception it is a valid support to find out in advance the sex of the child:

The waning moon at the time of conception (calendar in hand!) In popular belief would also be able to determine the delay of the child with respect to the DPP. The crescent moon, on the other hand, would anticipate a preterm birth.

Fonti per l'articolo: Geophysical Journal International, "Tides and the evolution of the Earth—Moon system"; American Journal of Obstetrics and Gynecology,"The effect of the lunar cycle on frequency of births and birth complications"; Current Biology, "Evidence that the lunar cycle influences human sleep"; Acta Obstetricia Et Gynecologica Scandinavica, "The influence of lunar cycle on frequency of birth, birth complications, neonatal outcome and the gender: a retrospective analysis"

TAG:
How to calculate the duration of a pregnancy ❯