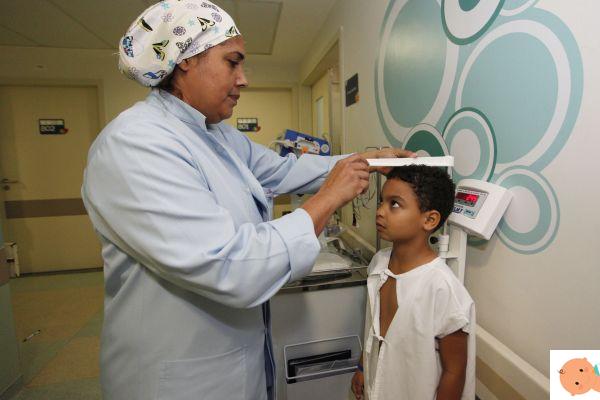 When a child gets sick

It is not uncommon for children to deal with the disease from the earliest years of life: a grandfather, a relative, sometimes even a parent. But when a child gets sick, the whole family is involved in a very delicate situation and to be managed in the best possible way. What to do when a child gets cancer or another serious illness? The advice of the Psychologist .

"When a family member gets sick - the expert says - the subjects involved in the context of the disease are the sick person and the whole family, which plays a significant role even more so if we are talking about a child because it is the place where the little patient knows, lives and faces the disease. Within the family, the patient unloads the burden of suffering and anguish, puts relationships in crisis, upsets the consolidated balance ». For this we speak of "cancer family", often characterized by moments of "emotional exhaustion.", a state of helplessness and uncertainty about the future, ranging from the hope of recovery to the fear of relapse or death ».

Read also: The 12 rules of life to prevent cancer, according to the EU

The disease: a traumatic event

If a trauma, in the most literal sense of the term, is a fracture between a before and an after, the discovery of a disease is certainly a traumatic event: «The path of life made so far at the beginning suffers an abrupt interruption. The child's experience is split in two between his previous and current daily life, which changes in a perceptible way: he will no longer be able to do some things and there will be new ones, probably less pleasant ».

In addition, this state of anguish can make others resurface traumatic experiences of the past, both in the child and in the other members of the family: «It happens for latent events, but also for those already largely overcome. For example, a bereavement ("Will what happened to my grandfather happen to me?"; "I will not be able to handle it if what happened to my father happens to my son") or the separation of the parents ("Now that I am sick they will be close to me ? ";" Will my ex-husband manage to organize himself to be present? ")».

The stages of the disease

According to psycho-oncology, the path of the disease consists of different stages, each of which presents different challenges for the patient and his family: «The pre-diagnostic phase, in which, when faced with the first symptoms, the tests are carried out; the diagnostic phase, when the disease is discovered; the hospitalization phase, in which the patient undergoes treatment; the phase of coexistence with the disease and finally the recovery ». We will focus on the first two stages.

Parents are the protagonists of the prediagnostic phase, especially if we are talking about preschool and school age children, more aware of the risks associated with some suspicious episodes to be investigated with exams. «It is inevitable to be alarmed, but it is important to manage one's emotional paralysis, the suspension while waiting to find out what it is. Adults use both coping strategies - ways of adapting and reacting to a particularly stressful event - and defensive mechanisms, which are influenced by the personalities of the subjects and their experiences ".

The stage of diagnosis

The diagnostic phase is the most difficult, both for the child and for the whole family, because discovering that you have a disease opens up a totally new and different future.

How to communicate the diagnosis to the child

To avoid precisely the risks described above, there is a great deal of team work in the pediatric oncology wards which involves doctors, parents and nurses which concerns the communication of the diagnosis and subsequent accompaniment. «Looking over the first 3 years of life, in which the communication of the disease normally occurs to the parents, psycho-oncology suggests that from the 4-5 years of age the child is at the center of the process».

Spesso the doctor he communicates the news to the child together with the parents or asks them to act as an intermediary, but in reality it should be he who tells the child directly and not the parents: «There are many reasons. First of all, he is the expert, and he also takes courses to better communicate the diagnoses; second, why children know how to identify different roles: the doctor knows more than the parents and therefore they expect him to tell him the medical issues. Having received parental consent, first the doctor alone with the child explains to him the disease and what will change in his life and will answer his questions. Then the child goes to his parents to tell them what the doctor said: this opens up the dialogue in the family and for the child it is an important process in which, through his own story, he begins to realize it ".

Read also: Cancer in pregnancy: becoming a mother with cancer is possible

How to tell your child about the disease

The communication of the diagnosis is not a lesson in medicine, but it is a dialogue: «The doctor and the parents must tune into the baby, modeling the intervention according to the child and age. If the parents agree, the doctor can use the name of the disease: it would be better to give the real name to things, but sometimes it can only scare you ».

Use metaphors. The key is to speak the same language as the child: «The most suitable tools for explaining the dynamics of the disease are the metaphors, which do not lie but make reality understandable and visible. Drawings, cartoons, fairy tales: "Fairy tales don't tell children that dragons exist. Because children already know. Fairy tales tell children that dragons can be defeated" said the British writer Gilbert Keith Chesterton. Already from pre-adolescenceinstead, you can speak in a more technical language because they study some things at school and want to know everything precisely ».

explain a leukemia the metaphor of the garden is widely used: «Flowers, plants and grass make the garden in the body (the pith) beautiful, but the nettles (the cancer cells) threaten the garden and grow spontaneously. The gardener (the doctor) will have to pull out those weeds with some medicines. '

What to tell your child about the disease

The right metaphor will not put you "safe" from your child's questions, which are actually a good sign.

"For example, he will ask himself if it happens to all or only to some, and if by chance he did something wrong that caused the disease to arrive. On the other hand, in the past it will have happened that he caught a cold because he had played in the rain, and maybe you had caught him again. Reassure him that this is different. '

Prepare him for the fact that his life will change a little: «You will spend more time in the hospital, some things you will no longer be able to do or for a while you will not be able to do it, you may feel nauseous or lose your hair during the therapies. But these changes will be temporary: remember that your child will only deduce the seriousness of the situation from your emotional state ».

Then try not to be overprotective. A justifiable trend, but to be avoided, is to create a bubble around the little patient: "The illness of a child in itself leads to an inevitable regression of the family system: the child will need more attention because he will have to be followed in all therapies or in case of physical difficulties. However, for him the changes will have to be limited to this, so as not to make him regress too much in development and in those autonomies that may have recently been conquered. Often, however, the mother risks creating a symbiotic relationship with her sick child who is dysfunctional, because it excludes the rest of the family and brings the little one back to a state of strong dependence ».

How to deal with the brother of a sick child

If the oncological family is then made up of siblings, even greater attention is needed in the face of the change in balance at home: "It is not uncommon for siblings to be a little" forgotten "with parents focused on their sick child».

When a teenager gets sick

For the pre-adolescent and adolescent age groups, things are very different. "In such a delicate moment of development and self-definition, a disease has consequences that can be more complex and arouse more multifaceted reactions in children: the body and its integrity are in fact closely linked to the development of one's own identity. After puberty, for example, the fear of death - previously absent - now exists. Emotional reactions are also less transparent: anger can be a way to hide what you really feel. And, if on the one hand he wants to be taken seriously and treated like an adult, on the other he also wants to be reassured: he may take longer, for example, for the boy to accept reality. You parents must be there, wait for his time and offer listening and support when they want it ».

TAG:
How to deal with premature birth ❯

add a comment of How to deal with the child's illness