How to manage (and prevent) tantrums 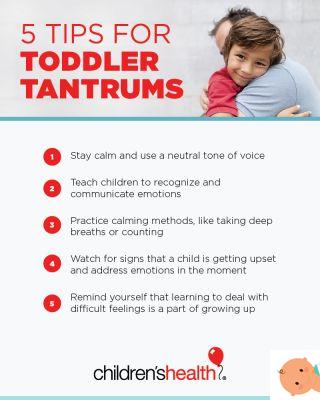 A for love. B like children. C for whims. Whims! Help: what to do? Because there is no love that holds. In the sense that, despite all the love in the world, sometimes it is really difficult to manage the whims of one's children. Screaming, crying, "no", "I don't like it" or "I want it" repeated intermittently.

We then asked Anna Oliverio Ferraris, psychologist, psychotherapist and lecturer in Developmental Psychology at the University of Sapienza in the city, what to do to better manage them and, possibly, to prevent them.

"First of all - reassures the psychologist - tantrums, like many other behaviors that can put a strain on parents, are largely a component of normal development. That is, all children are capricious from time to time, argumentative and sometimes stubborn" .

The tantrums? Need for resourcefulness

In particular, however, as he explains in the book Not just love. The psychological needs of children, tantrums and "bad things" tend to be more frequent towards the age of two or three and in early adolescence, because in these moments of development there is a need for greater independence and the need to affirm it. "In younger children it is a naughty way of checking adult rules and patience. And then something similar also occurs in early adolescence. Therefore, we must not worry too much about the irritating behavior that children can have at these ages, as it is a phase of growth. "Even if, in the end, a certain amount of provocation is normal even between the ages of five and children. eleven years.

Read also: Gentle discipline: how to deal with tantrums

Although the oppositional behaviors of children can put a strain on even the most patient parent, Anna Oliverio Ferraris heartens mothers and fathers, reassuring that setting limits and establishing clear rules, in most cases serves to contain whims: those attitudes provocative, stubborn, indifferent who take on different shades according to age and, of course, from child to child.

"In fact, there are differences related to temperament and there are some particularly stubborn children. It is not uncommon, among other things, that these children have parents with a similar personality, so that in some families the "clashes" between "strong" wills may be more frequent than in others. As well as on the other hand there are parents who are too lax, who do not clearly teach their children to discriminate between what is acceptable and what is not ".

Apparently, virtue lies in the middle. Why parents should try to be neither too uncompromising nor too permissive. "Both too harsh reactions and laxity often have the effect of worsening the situation. Therefore, if the method used by a parent in resolving conflicts with their children does not work, it is better that the other, instead of insisting on same direction, you are looking for a different approach, perhaps the opposite "advises the professor.

From one extreme to the other

Here are two situations described by Anna Oliverio Ferraris in the book Not just love: Marco, seven years old, was a real pest. He would lead his little sister, pee on the carpets, argue all the time, spit at his parents and refuse to do anything that was required of him. Both dad and mom had been raised by very strict parents, so they decided that their children would grow up in an atmosphere of total freedom. Unfortunately, however, their permissiveness with Marco did not work. Only when they began to behave more firmly, by setting some rules, did things begin to improve. Six-year-old Sara refused to do anything her parents required. She cooperated in nothing, not even in washing and dressing. From a very young age she had grown up in a hypercontrolling climate: her parents, who cared very much for her order, had not allowed her to be spontaneous and to let go, every now and then, to the pranks typical of her age. Also, if she was tired or sad, they didn't take it into account. As they learned to be less restrictive and to allow for some confusion and clutter, Sarah began to relax, respond more to their requests, and be more conciliatory.

What are the whims

Although they can take different forms, the lowest common denominator of tantrums is, according to the psychologist, the insistence and in the end it can really exhaust the adult. There are those who give rise to more or less blatant and interminable dramas in the face of mum or dad's refusal to buy what they want at the supermarket, those who can't tolerate being told "that's enough: turn off the TV or turn off the video game" and those who start to running around the whole thing instead of going to the bathroom to brush your teeth before going to bed.

"If, as we said, whims are a component of development and therefore we must not make a drama out of it, it is also important to ask ourselves what some reactions are due to, to prevent them" points out Oliverio Ferraris.

In other words, "parents should ask themselves if their children actually lead a life that is suitable for them, which includes play, movement, interactions with peers, adult care ...". A stressful everyday life, marked by excessive commitments, or on the contrary a day spent motionless in front of the TV, without the possibility of playing and interacting with their peers, they can in fact trigger capricious behaviors and the continuous search for gratifications. "From TV, for example, excessive stress comes and a child who spends hours and hours in front of the small screen is excessively exposed to advertising that induces the desire to want this and that: from snacks to toys ... And sometimes the parent's refusal ends. with the triggering of grueling protests ".

"It must be said - he adds - that boys and girls the younger they are, the less they have full control of their emotions, so as soon as they see something they want it or, on the contrary, they absolutely want to avoid a series of tasks: like washing your hands because it's time to sit down at the table or your teeth because that's how you do it before going to bed. Even if at first they may oppose it, they will learn it later on growing up and in an even easier way if they are satisfied because they do fun things and have a good relationship with the adults of reference ".

The crying baby does not throw tantrums: it communicates

The crying infant communicates. It is not capricious. He cries because he feels discomfort: he is too hot or too cold, he is uncomfortable and would like to change position, he is hungry or thirsty, he is not well. Or he wants more simply draw attention to be picked up because he wants to cuddle.

As children grow up, they do not need to always be in their arms or cry for attention, but the presence of the adult continues to be important for their sense of security, to make sense of things, to acquire ever greater autonomy.

To stem the whims? With good discipline

To stem the whims you need a little good discipline, made up of rules, dialogue and understanding. "Good discipline is not humiliating, it is firm but not necessarily severe, it leaves room for freedom but in compliance with the rules".

This means that if the child has a tantrum, one must avoid humiliating him or labeling him with judgments such as "you are a stupid child", "you are bad", "you are always the same": that is, considerations are not made about the person but about the wrong behavior. . Better still to talk positively about the behaviors that would be better to adopt.

When he is intractable because he is particularly agitated, he can be said "stay a little on your own, and when you are calmer he goes back to mum and dad", so that without cutting the bridges he is invited to let off steam and calm down. Read also Punishments, better teach self-discipline

And finally, rules are important for growth, they set limits, they help to make sense of things, as long as they are coherent and not dictatorial, not too restrictive, and not associated with harsh punishments. If age-appropriate, even if they protest, children understand deep down that there are limits and you can't get everything right away.

"Also keep in mind that over the years - specifies Oliverio Ferraris - intellectual maturity changes and only by growing up do children acquire the ability to express the motivations in support of their behavior. Up to a certain age, typically around 3-4 years, therefore , a child repeats over and over again "I want it, I want it, I want it", or "I don't like it, I don't like it ...", then he also learns to explain why he absolutely wants or doesn't want that thing ".

With age, the desire for autonomy grows: let's go along with it

It is experienced around the age of 2-3, then the need for self-affirmation and independence returns even stronger in the pre-adolescence phase. What to do?

Anna Oliverio Ferraris recommends finding a healthy one balance between granting and forbidding, demonstrating to the child that he understands his need for autonomy and growth.

For example, you can allow some afternoon outings with friends, always motivating any refusal, and demanding respect for the timetable. This fosters a sense of responsibility.

It is good to leave spaces of freedom even inside the home: it is typical that at 11-12 years of age, for example, the desire to be alone in one's own bedroom occurs, to hang photos or posters on the walls: it is his space, in which he can express himself. Just as it is good to allow some freedom in the choice of clothing or hair cutting.

Better not to interfere too much on the friends front, who change over time: unless the people he frequents are not recommended (they drink, take drugs, etc.), then in this case it is appropriate to intervene.

In short, if some freedoms are to be indulged, for others instead (sex, tattoos, night parties, piercings ...) it is good to explain that there is no rush or that they can be dangerous.

Finally, at this age it is important to make children participate in family life, involving them in the choices to be made, for example on the destination of the next holidays, on certain expenses for the home, on common jobs and activities. Feeling called into question is gratifying and helps to accept limits on other aspects of everyday life.

When are malice and tantrums more frequent in children?

Tantrums and "nastiness" tend to be more frequent around the age of two or three and in early adolescence.

Do you need to worry if children have tantrums frequently?

If whims are a component of development and therefore we must not make a drama of it, it is also important to ask ourselves what some reactions are due to, to prevent them.

TAG:
How to handle conflicts in the classroom ❯

add a comment of How to manage (and prevent) tantrums