I am pregnant and I have not noticed 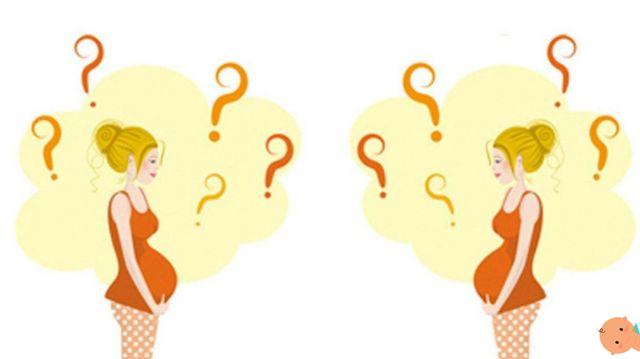 Pregnant without knowing it

"At 20 I had the classic 'unlikely' relationship. In March I don't see my period, then the months to follow always on time: who would have thought of a pregnancy when in the seventh month you have no belly, no vomiting, no weight gain, Do you have no nausea and are you on period? Well, I found myself in labor pain on a Saturday night, after I had spent the whole morning at school, done my nice homework at Del Paeseno and my art history question ... later 10 hours of labor I call my mother, I was not married or officially engaged. I go to the hospital and for the first two hours the diagnosis was an extra-uterine pregnancy gone very badly, a sort of internal birth, I had a large mass of blood and we had to start thinking about my death. The next hour, after 13 hours of labor, I find myself with a little creature in my arms ... "

Is it possible to be pregnant without knowing it?

Can it happen to carry on a pregnancy up to 7 months and not notice it? What is cryptic pregnancy?

"It's rare, but it can happen" replies the doctor.

"A young girl is not used to observing changes in her body and, especially if the signs of pregnancy are not so evident, she mistakes a stomach ache or a little nausea for transient complaints.

To this is added the fear of an event that you are not ready to live, which leads to ignore certain signs that for another woman would be unequivocal. These are often girls not used to talking about certain things in the family and the fear is so great that she puts her head in the sand hoping that it is not what she is afraid of. Without considering a good deal of naivety, which leads to the belief that pregnancy is impossible after a single unprotected intercourse or using poorly reliable methods of contraception, such as interrupted coitus ".

A 'fake' period in early pregnancy

What about menstruation, which the girl reports having had?

It rarely happens, but it can happen, that in the first three months of pregnancy there are losses similar to a short cycle of 1-2 days, commonly referred to as 'change of the month'.

"To cause them is a hormonal adaptation of the beginning of pregnancy, but after three months the phenomenon disappears, so it is really difficult for a pseudo-cycle to occur at regular intervals up to the seventh month. It is plausible instead that in a young girl the cycle is not yet regular and the absence of menstruation for a few consecutive months goes almost unnoticed ".

And the belly does not grow?

After 4-5 months the belly begins to be clearly visible. However, if the woman is particularly in overweight, the abdomen is more voluminous due to the presence of fat and there may be confusion, while if the baby is thin it could be more minute. At the same time, you don't think of a baby when you feel certain movements in the belly, especially if you think you have had your period until recently.

And so the pregnancy goes on until certain events lead to go to the hospital and discover the truth.

The testimonies of mothers who realized they were pregnant in late pregnancy:

Pregnant with your period, is it possible? The answer from the podcast expert

Can you get pregnant while on your period? Answered by Dr., midwife at Studio Intreccio Treviglio.
Everything you need to know between the follicular and luteal phases, ovulation and fertile days
Studio Intreccio Facebook page