I can't breastfeed: causes and advice 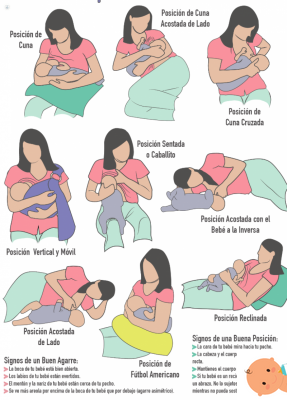 Already during pregnancy the idea of ​​being able to breastfeed involves the future mother, who undertakes to prepare the breast, attends preparation courses and studies the best positions and techniques to ensure that breastfeeding begins and proceeds in the best possible way. But very often reality collides with expectations and breastfeeding is not always immediate, easy, intuitive. What to answer to new mothers who declare "I can't breastfeed"? Here are some tips.

The reasons why you cannot breastfeed

Here are a few causes of inability to breastfeed:

Breastfeeding could proceed in a simple and serene way, but there is no doubt that many women experience at least once some problems that could make breastfeeding difficult.

Pain in the nipples

What causes i sore nipples? Sore nipples are a common reason women throw in the towel while breastfeeding. Many women report tingling and pain as being caused by "stings and needles"in the first 30 seconds or so of breastfeeding. But in other cases the pain persists even for the entire feeding. Often it is a problem that occurs mainly in the first weeks, then the nipples" get used to "and harden. But in other cases the pain persists. The best way to solve the problem is to change position and teach the baby to latch on correctly: often the pain is caused by the fact that the baby takes only the nipple and not the whole areola. attached correctly the chin and the tip of the baby's nose touch the breast and the lips are folded out (like a fish). If you are using a breast pump, you may be using too high a speed.

Sometimes a milk duct can become clogged, causing the milk to stagnate and causing a red, tender lump. Although a blocked duct itself is not serious, it can lead to a breast infection if not resolved. In this case, breastfeeding should not be interrupted: the practice helps the milk to flow and eventually unblocks the duct. Meanwhile, apply a warm compress before each feed and massage the lump while breastfeeding. Once the baby has finished breastfeeding, empty the affected breast, either manually or with a breast pump.

La mastite è an infection breast tissue causing fever, muscle and breast pain and redness. It usually occurs when a milk duct becomes clogged and trapped breast milk becomes infected with bacteria from the baby's mouth. Up to 10% of all women can experience it, usually within the first six weeks of giving birth. How to treat mastitis: Your doctor will prescribe antibiotics that will make you feel better quickly.

If the nipples are pink, burning, and tingling, a thrush called thrush may have set in.

Vasospasm in the nipples

Vasospasm of the nipple - also called Raynaud's disease - occurs when the blood vessels in the nipples tighten and narrow and do not let enough blood through, causing pain, burning or numbness.

The most common reason why moms stop breastfeeding is that they think their baby is not getting enough milk. This is usually not the case, but if you are supplementing with formula milk or lengthening the time between feeds, your breasts will not be stimulated enough to produce enough milk. In some cases, you may not be able to produce enough milk (as in the case of a thyroid disease), but in most cases this is not the case.

How can we control milk production?

Monitoring the weight of the baby. After 14 days from birth, the baby must have fully recovered from the physiological decline and then must start gaining about 200 grams per week. If the baby is not gaining enough weight, he is not getting enough milk.

Inverted nipples are another common cause of some difficulty breastfeeding. Here are some tips to help you breastfeed more easily:

What to do if you are unable to breastfeed?

L'nursing it is undoubtedly the best way to feed the newborn and according to the World Health Organization the baby should be exclusively breastfed for the first six months of life. However, the infant formula formulas they look more and more like mother's milk, and a serene and happy mother who bottle feeds is much better than a mother who breastfeeds with stress and frustration. Talk to a lactation consultant for support, advice and tips to improve breastfeeding, but if you decide to stop, don't feel guilty: it's not breastfeeding that makes a good mom!

TAG:
I don't get pregnant: tests to do to see if there are any problems ❯

add a comment of I can't breastfeed: causes and advice