If the child has an angioma 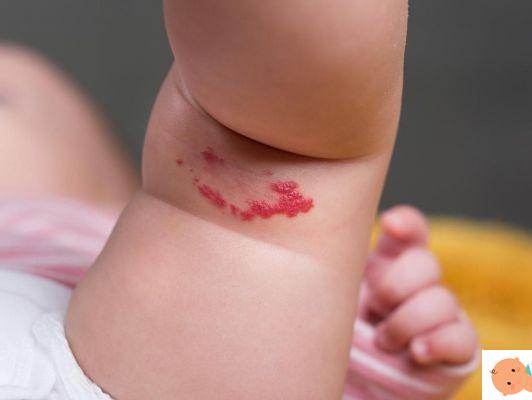 In the past, any red "spot" that appeared on the baby's skin was called an angioma, until it was noted that not all skin manifestations behaved in the same way. Even today, the term angioma is often used in a somewhat misleading way, including some conditions that are also very different from each other.

The dr. Vito Di Lernia, Head of the Simple Structure of Immunological and Pediatric Dermatology of the Santa Maria Nuova Hospital in Reggio Emilia.

What is an angioma?

Let's start by saying that the term angioma is actually not quite correct and is often used in a somewhat improper way. "The term angioma - explains Dr. Di Lernia - understands three different conditions: hemangiomas, vascular malformations and transient vascular anomalies ". These are different manifestations, each with its own characteristics. Let's see them in detail.

Hemangiomas are benign tumors that may be present from birth or, more often, appear soon after. They appear almost suddenly like small flat spots of bright red color and then they tend to increase in size quite quickly, developing small swellings and causing mothers and fathers to worry a lot. "There proliferative phase, ie growth, of the hemangiomas ends around the first year of the child's life, followed by a stationary phase in which shape and size do not change. After the first year, most hemangiomas tend to gradually reduce until it disappears between 5 and 10 years ", explains Dr. Di Lernia.

Depending on the depth of the vascular formation, the skin can return to perfectly normal or remain a little wrinkled and soft: this is because the blood vessels slowly reabsorb and are replaced by elastic and fibrous tissue.

Hemangiomas are very common among children, so much so that it is estimated that they affect between 4% and 10% of newborns, especially those with low birth weight. Generally you don't have to worry precisely because they tend to disappear spontaneously, but, as Dr. Di Lernia, "there are also cases where it is necessary intervene with medical therapies, in particular with oral or topical beta-blockers ".

It is necessary to intervene when the hemangioma:

The possible complications of hemangiomas

Complications related to hemangiomas can occur both in the "growth" phase and in the stationary phase. In some cases (about 5%), especially in the lips and genitals, hemangiomas can lead to ulcers, bleeding or infection. If the hemangioma is on the eyelid, however, it could cause vision defects.

The hemangioma could also be located in the larynx, or it could be located on the liver, with potentially very serious consequences for the baby.

Read also: Infantile hemangiomas: here are all the European recommendations

Vascular malformations are real anomalies of the vessels, due to an alteration of development during the embryonic formation of the vascular system. These are congenital malformations, that is, already present at birth even if not regularly visible.

They can be located in various points of the body, including the face, with an extension ranging from a few millimeters to a few centimeters. Vascular malformations are subdivided according to the vessel involved, in:

The most common vascular malformations are the flat angiomas or capillary malformations, red-pink in color (hence the fanciful popular names, such as "desire for wine", "desire for strawberry", etc.), which have only a superficial development. "When it comes to vascular malformations of this type there are usually no problems, if not possibly at a psychological level for the child. In the event that the lesion is present in a particular point, such as the face, you can decide to intervene with lasers that lighten the affected area "explains Dr. Di Lernia.

More rare and problematic are mixed venous or arterial or lymphatic malformations (lymphangiomas), which can involve tissues deeper, up to affect internal organs. Some malformations, even if trivial, such as mainly venous ones, can still cause pain or inflammation problems, especially if localized in the joints (especially the knee). Vascular malformations over time may become evident or remain stationary, but they do not regress on their own. "Unlike hemangiomas, vascular malformations are generally permanent, so if necessary we can intervene immediately" says Di Lernia.

Vascular anomalies are very frequent, and in fact it is estimated that one in three newborns has an alteration of the skin vascularity at birth or in the immediately following period, but only 1% of children manifests a real vascular malformation. The National Health System recognizes complex and syndromic vascular malformations as rare diseases. Being diseases that are often disabling, they require the intervention of many specialists.

Read also: Development of the embryo

Transient vascular anomalies are manifestations that are not part of either malformations or hemangiomas and which generally spontaneously regress. "The transient anomalies are due to dilations of minor capillaries and appear as pale pink spots. They are generally located at the level of the eyelids, the forehead ("angel's kiss") and the nape of the neck ("stork's bite") and tend to be seen more when the baby cries, has a fever or when bathing "explains Di Lernia This type of spots generally disappear within the first year of a baby's life, with the exception of those located on the nape of the neck which may persist, but which are not problematic because they are covered by the hair.

It is called this way because it is located behind the nape and on the scalp, where, according to popular legend, the stork would keep the babies when it takes them to the various houses; in reality it is a fairly frequent flat superficial capillary malformation, which over time may clear up or remain unchanged. Being covered by the hair, it does not require any treatment.

What to do if the child has an angioma?

Vascular malformations, infantile hemangiomas and transient anomalies appear at birth or a few weeks later, that is, at times when children are often visited by the pediatrician. The doctor can then make a rough assessment to assess whether it is a transient abnormality, a hemangioma or a vascular malformation. "The pediatrician will be the one to suggest to the parents whether or not to do one visit with a specialist in pediatric dermatology "explains Di Lernia. Usually the locations most at risk are those involving certain areas such as:

for diagnosis a simple clinical examination may be sufficient, which can be accompanied, if necessary, by an ultrasound examination (echocolor-doppler). Instead, an MRI (nuclear magnetic resonance) is performed to detect the connections of a hemangioma with the surrounding structures and to search for associated anomalies, but the examination requires general anesthesia in young children due to the need to remain motionless.

How hemangiomas and vascular malformations are treated

Le capillary malformations which are the most common forms can be treated by the dermatologist with vascular lasers. For the treatment of mixed or complex malformations it is advisable to contact multi-specialist equipments. In some cases, in fact, the management of these anomalies requires the support of other specialists, such as the plastic surgeon, the vascular surgeon and the interventional radiologist who collaborate as a team with the dermatologist.

In the case of infantile hemangiomas, only 10-12% of them require treatment. Most hemangiomas, in fact, regress on their own and it is therefore only necessary to have them checked periodically.

However, there are cases in which it is necessary to intervene, namely when it comes to:

To treat a childhood hemangioma it will then be necessary to evaluate some factors such as the size, location and age of the patient.

As also indicated by the guidelines of the American Academy of Pediatrics, the treatment of hemangiomas involves the administration of propranolol, a well tolerated drug, which can also be used for prolonged periods, as long as it is under medical supervision since it could cause blood sugar and blood pressure drops. Drug therapy allows you to reduce the size and depth of the hemangioma, restoring the functionality of the organ involved without the need for surgery, which is postponed to a time when it will only serve to eliminate any residues of abnormal blood vessels. To "cancel" the manifestations that did not undergo regression the Dye laser which emits a light wave capable of striking the red-violet pigment of the capillaries. The treatment is a bit painful and for this reason it is done in deep sedation up to about 9 years, while if the child is older, no anesthesia is required. The number of sessions required varies according to the individual response

If the child has a vascular malformation that is usually permanent, perhaps of considerable size, it is possible to intervene already around the age of one or in any case before entering primary school. Especially if the malformation affects the face or other clearly visible areas of the body, early intervention can avoid psychological distress to the child to feel "different" from other children.

TAG:
If the child prefers the grandmother, what to do ❯

add a comment of If the child has an angioma