If your child is celiac 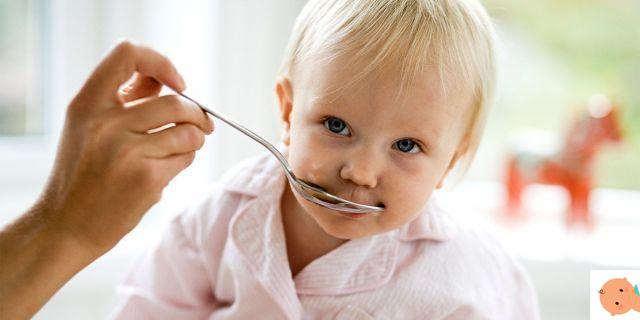 In children, celiac disease is one of the most frequent chronic diseases and in our country it affects one in ten Del Paeseno. It is a permanent intolerance to gluten, that is the protein component found in wheat (what is commonly called "wheat") and in other cereals, for example spelled, barley, rye, oats, kamut (Egyptian wheat), spelled, triticale, bulgur (cooked wheat), malt, greunkern (Greek wheat) and seitan (food made from gluten).

In reality, gluten is not present in the grain of the cereal or in the flour, but is formed only following the addition of water and the formation of the dough.


Celiac disease is an autoimmune disease also called gluten-sensitive enteropathy. "Enteropathy" means bowel disease: in fact the celiac's intestine cannot assimilate gluten, considered a toxic agent and the gluten-free diet is the only possible therapy to cure celiac disease and to lead a peaceful and health.

In fact, by ingesting gluten, in the celiac the immune system is activated in an anomalous way, which responds by rejecting gluten and damaging the intestine. So only after the introduction of gluten-containing foods in the child's diet (usually between the seventh month and two years) can the first symptoms appear.

But what are the characteristics of celiac disease? How does a mother know that her child has celiac disease? “The first manifestations of celiac disease in children are diarrhea, vomiting, stunted growth, low muscle mass or excessive thinness”Explains Corrado De Rinaldis, head of the gastroenterology module at the Pediatric Unit of the Vito Fazzi hospital in Lecce. “Early diagnosis is fundamental and must be based not only on the typical aspects of the disease, but also on those aspects that characterize the atypical and silent forms of celiac disease.

This is why in children the mood swings, irritability, apathy, absence of a smile, repeated abdominal pains, anemic states and being detached from the surrounding environment, can be crucial small signals in the identification of atypical or silent forms of celiac disease.

Very often, in fact, these aspects are neglected and growing up the child will be an adult with a depressed character, sometimes with abdominal pain, gastritis, a sense of inadequacy, as well as obviously being a subject probably with some associated pathologies and many other potentials than in celiacs. have a greater recurrence (autoimmune thyroiditis, diabetes or digestive tract neoplasms) ".

Early diagnosis is key to avoid and / or anticipate possible complications or real future pathologies. Blood tests are also important, they are non-invasive and highly reliable, as is the determination of anti-transglutaminase antibodies that can be performed on saliva.

In the case of young patients, the confirmation of celiac disease (which must be carried out by intestinal biopsy), being an invasive and annoying examination, scares the parents a lot, but local anesthesia is always practiced to sedate the child and the tube for gastroscopy is very smaller (in very young children a capsule is used instead).

When is it convenient to introduce gluten in the child's diet? “The introduction of the first cereals (biscuits and baby food) tends to take place around the sixth month. In fact, it seems that first it can somehow favor the onset of celiac disease ”adds De Rinaldis. "On the other hand, the beneficial effect of prolonged breastfeeding at least up to six months is very likely: it seems that the intestinal walls of the baby are strengthened and protect against gluten intolerance".

“The national health service also contributes to the cost of gluten-free foods, which can be purchased in pharmacies, with a percentage that varies from region to region” concludes Dr. De Rinaldis.

“Finally, I recommend that parents of a celiac child join the Associazione Del Paesena Celiachia (http://www.celiachia.com/), created to promote assistance and stimulate research. For the rest, the life of a celiac child is the same as that of others, you just need to take precautions in the diet: even many restaurants and tourist facilities, given the large number of people with celiac disease, have adapted and offer ad hoc menus ".


TAG:
Second pregnancy, all you need to know ❯

add a comment of If your child is celiac