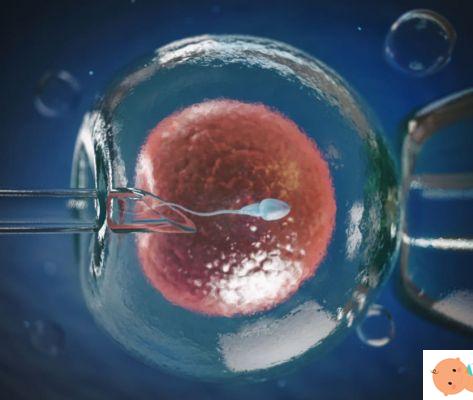 IVF, what is it

IVF: the acronym stands for "in vitro fertilization with embryo transfer": it is a technique of assisted reproduction which involves the union in the laboratory of egg cells and spermatozoa and the subsequent transfer of any embryos produced in the woman's uterus.

The fertilization of the eggs with the spermatozoa can take place in the traditional way, that is by putting them in contact with each other in special containers, or through ICSI, intracytoplasmic sperm injection: in this case a single spermatozoon is introduced with a special pipette into the cytoplasm (the gelatinous substance that surrounds the cell nucleus) of a single egg cell, to optimize the possibilities of fertilization.

It is estimated that from 1978 (the year in which Louise Brown, the first child born from in vitro fertilization, came into the world) to date the technique has given life to over seven million children all over the world: for its "invention" and fine-tuning the English biologist Robert Edwards won the Nobel Prize for Medicine in 2022.

When it can help

IVF is indicated when infertility is linked to:

In vitro fertilization is also indicated when the couple is fertile but decides to have one preimplantation genetic diagnosis for the risk of hereditary diseases. It is also necessary in the case of heterologous fertilization.

And in the future?


IVF is the technique provided in the case of mitochondrial donation for the prevention of diseases related to mitochondria: it must be said, however, that this procedure is not currently authorized in our country, while a trial is underway in Great Britain. And we pass from in vitro fertilization also to the eventual genetic modification of embryos, a highly controversial procedure whose first case was announced - amid a thousand controversies and disputes - at the end of 2022 by a Chinese scientist.

IVF, the advantages and possible disadvantages

Among the advantages is the fact that it is a relatively minimally invasive technique, which does not require hospitalization and which is essentially painless for the woman. However, it must be said that some of the drugs used may involve risks (for example that of ovarian hyperstimulation).

In addition, there may be a slight increase in complications for pregnancy and the fetus (in terms of premature birth, low birth weight or congenital malformations, particularly of the heart type). However, it must be said that the question is still very controversial, and it is not clear whether these effects that are sometimes observed are attributable to the procedure itself or to the infertility conditions that led to its use.

IVF, the procedure: this is how the technique works

Although the details of the method may vary from center to center, all fertility centers follow the same basic steps for IVF.

The ovaries are stimulated to develop several follicles at the same time (usually about ten). This is achieved by administering gonadotropins (FSH) that the woman herself injects under the skin with small syringes (it can be done at home: the treatment usually lasts 10-15 days). In some cases this administration may be preceded by that of other drugs (such as Gnrh agonists) which help synchronize the growth of follicles and prevent spontaneous ovulation.

During the period of stimulation, periodicals are performed ultrasound checks (to evaluate the response of the ovaries to treatment) and hormonal (blood tests for the dosage of estradiol) which allow to understand at what point the maturation of the follicles.

When at least two / three follicles have reached a certain size (16-20 mm in diameter), their final maturation is induced with an injection of the hCG hormone (human chorionic gonadotropin).

This procedure may carry the rare risk of excessive stimulation of the ovaries, leading to the so-called ovarian hyperstimulation syndrome. It is a potentially dangerous syndrome, which can involve kidney, coagulation, respiratory problems, but which is increasingly rare thanks to the optimization of the use of drugs and control methods.

2. Collection of the oocyte (pick up) and preparation of the spermatozoa

Eggs are collected 34–38 hours after the hCH injection, just before ovulation. The collection of cells is carried out for vaginal route, under ultrasound control, using a long hollow needle to puncture the follicle. It is the pick up: a procedure carried out in the operating room that involves sedation of the patient, who therefore does not feel any pain.

In the meantime, the partner's semen, through ejaculation (this obviously unless it is a heterologous fertilization with sperm donation).

The collected liquid is analyzed to select spermatozoa that have a higher morphological quality and better motility.

At this point the oocytes collected and the spermatozoa selected from the seminal fluid are mixed together in a container with a suitable culture medium.

If there is one ICSI instead, a single live spermatozoon is introduced into the egg with a needle.

The embryos obtained through the assisted fertilization procedure are analyzed in the laboratory to identify those with the best morphological characteristics. In some cases - for example if the parents are carriers of an inherited genetic disease - it is possible to proceed with the preimplantation genetic diagnosis.

Some centers are starting to propose one genetic screening a carpet of embryos produced, regardless of the risk of genetic diseases, but the practice is currently still controversial.

Generally, one or two of the embryos deemed suitable for implantation are transferred, in order to avoid the risk of multiple pregnancies, which have a higher risk than single pregnancies. obstetric and fetal health complications.

The transfer usually occurs three days after fertilization, but can also occur five days later, at the stage of blastocisti. In practice, the embryo is aspirated through a small catheter from the container in which it is located and transferred directly into the woman's uterus with an outpatient procedure, without the need for sedation.

Often, to support the implantation phase of the embryo and its subsequent development, women are advised to undergo therapy progesterone.

If good quality embryos remain after the transfer, they are subjected to freezing (generally the technique used is called di vitrification), to be able to use them, if necessary, in subsequent cycles of assisted fertilization without starting over with ovarian stimulation.

IVF, success rate of the technique

About two weeks after the transfer (the exact moment may vary according to the centers) the woman is asked to perform a dosage of chorionic gonadotropin (hCG) in the blood: in this way it will be known whether the pregnancy has started or not.

If the hCG test is positive, a first ultrasound scan is performed approximately four weeks after the pick-up (the gestational age would then be approximately six weeks), to assess the presence and viability of the embryo. At this time, in fact, the fetal heartbeat.

The success rate of the technique also varies greatly depending on the conditions that led to its use: in general, for example, it works best for younger women who still have adequate ovarian reserve.

Just to have some reference data, the National Registry on PMA of the Higher Institute of Health reports, for the year 2022, a 27,2% of pregnancies obtained with IVF (considering only fresh cycles, that is with oocytes and spermatozoa just taken and not previously frozen). And considering the whole Fivet + ICSI both from fresh material and from frozen material, the births were 74,8% of the total pregnancies started.

Sources for this article: In vitro fertilization article from Up to Date, a digital database of specialist information for physicians.

Read also the testimonies of mothers who have resorted to IVF. Here are their stories. TAG:
Happiness is inherited from parents ❯

Mom even if there is a fibroid

Infertility, how important is age

Cryptic pregnancy, when pregnancy does not reveal itself