Induced delivery: why and how doctors stimulate labor 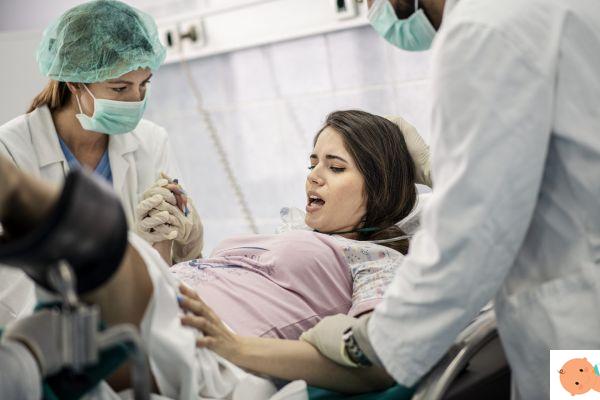 During the pregnancy we have all asked ourselves at least once: what if at the end of this wonderful 40-week journey I have an induced birth? Let's not hide it: induction worries a bit because in reality we do not know how it works and the idea alone seems in contrast with the much vaunted naturalness of childbirth. However, be aware that often stimulation can also avert the danger of a caesarean section. In any case, behind this choice, there is always the special attention of doctors towards the pregnant woman and her child.

So let's find out what induced childbirth is, why it is practiced, when and how it is done.

What is induced childbirth

By induction we mean a set of methods that have the aim of starting labor. There are various procedures that can be tried, both mechanical and pharmacological. Together with his patient, the gynecologist will be able to choose the one that he deems most suitable for the individual case.

Stimulation is usually scheduled. It is difficult to improvise "at the last moment". In fact, it is not an emergency technique, as a caesarean section could be, often used to cope with an alarming situation because it is more immediate.


Also keep in mind that induction is not done because the mother is tired, because she can't wait to meet her prince or princess or because the belly is heavy. Like everything that is medicalized, induced childbirth also has some indications, which we will now see, and is subject to the careful analysis of health personnel. This is done only if it is believed that the benefits for the woman and the baby are greater than the risks that the expectation of spontaneous labor would entail.

How frequent is induced childbirth

Over time, the frequency of induced labor has increased. As an example, just think that in the United States in 1990 the procedure was carried out in 9-10% of the parties. In 2022 it reached 22-23%, although subsequently there was a new decline. In Del Paese, in some areas, there is even more than 25% of the births.

Why induced birth is done

As you probably already know, a pregnancy is termed term at 37 weeks of gestation. That is, it means that, at this time, the baby is ready to be born without great danger to his health. According to the World Health Organization, the "pregnancy that continues beyond 42 + 0 weeks (294 days) of gestational age" is protracted.


Prolonged pregnancy can lead to some maternal and fetal problems, particularly if there are other concomitant risk factors (for example, a mother's illness or a reduction in the amount of amniotic fluid). Hence, if the little one takes it easy, induction may be necessary.

Childbirth induced in case of rupture of the membranes

Rupture of membranes (more commonly referred to as water rupture) occurs in about 10% of full-term pregnancies. In 60% of these cases, labor starts on its own within the next 24 hours. In 95% of cases it starts within 72 hours.

The sudden breaking of the waters is one of the reasons that must push a pregnant woman to go to the hospital because it is an event that involves dangers for both the mother and the baby, especially if it occurs before the 37th week. In any case, if the membranes rupture, it is advisable to evaluate the doctor who can decide whether to wait (as long as possible) or whether to induce birth.

Induced delivery in the event of intrauterine fetal death

We know: we are touching a sore spot. Any expecting woman is terrified of this eventuality: losing her baby. If it happens in the first 20 weeks it is a spontaneous abortion, while subsequently it is called fetal intrauterine death (MEF).

In most cases, natural birth is preferred over caesarean because the latter, like all surgeries, has risks and is only done in certain circumstances. So, while it is emotionally difficult to deal with, mothers experiencing MEF are much more often induced to give birth. But as we have already pointed out, it depends on what the gynecologist will decide together with you.


Other indications for induced delivery

There are also other cases in which the doctor can opt for induced childbirth: hypertensive disorders (high blood pressure), poor growth of the child, pregnancy cholestasis, problems with the quantity of amniotic fluid (if it is too little or too much), diabetes, very large child. In some cases it can also be decided whether twins are on the way or if the mother has had a previous caesarean section and wants to give birth naturally. Vbac (natural delivery after a cesarean) is not a contraindication to induction.

Typically, if labor does not start spontaneously, induction is scheduled between the 41st and 42nd week of pregnancy.

What are the most popular methods of inducing childbirth

There are various ways to stimulate labor for childbirth. The first is constituted by the administration of prostaglandins, substances that modify the cervix and start the contractions (or in any case they should start them: because remember that induction does not always work). The doctor or midwife can apply a tape, a kind of piece of cloth soaked in these hormones, into the vagina. If the desired effect is not there, the tape can be inserted several times. Alternatively, there is also a gel formulation.

Small side note: semen contains prostaglandins. This is why at the end of pregnancy it is recommended to have sexual intercourse with the partner to try to start labor. As they say, business is combined with pleasure!

The most used system in the world for induction is oxytocin which is administered intravenously (continuously or at intervals and at different doses). Very often it is also used to accelerate contractions that have already begun that last for a long time. The effect is more immediate than with prostaglandins, but be aware that the contractions could be even more close and painful.

There are also other methods to start labor, which do not require drugs, but which often prove to be effective anyway.

The separation of the membranes stimulates the release of natural prostaglandins. It is not a real induction, but a "help". It is usually practiced at 40-41 weeks in women with their first pregnancy, at 41 in those who already have other children. We will not lie to you: it could be an annoying maneuver.

Sometimes we proceed to the manual breaking of the waters which in jargon is called amniorexi. Often it is done simultaneously with the use of oxytocin to speed things up a bit. In some cases it cannot be done at all: if there is placenta previa, if the baby has not yet engaged the birth canal, if there are genital infections or HIV in progress.

Transvaginal catheters can also be used, which also promote the production of endogenous prostaglandins. An example are some kind of balloons that are inflated in the vagina to gently dilate the cervix.

Like any medical procedure, induction of labor is not without its risks. We do not say it to convey fear, but because it is a fact. Obviously, something negative does not necessarily happen: on the contrary, fortunately these are rather rare events.

The risks of induced delivery depend on the methodology chosen. Let's see some of them.

Can an epidural be done in case of induced birth?

The answer is yes. Even with induced delivery it is possible to reduce the pain of the parturient by administering epidural analgesia.

add a comment of Induced delivery: why and how doctors stimulate labor