Influenza vaccine in pregnancy, why do it 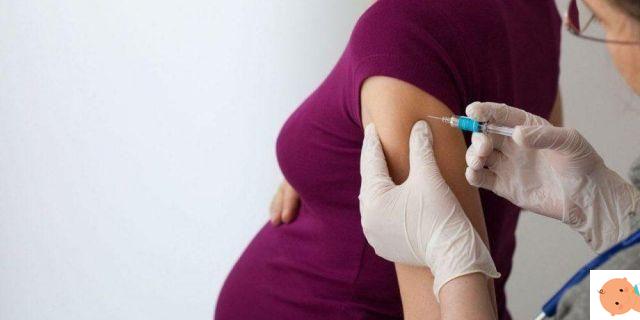 Never before has there been talk of a flu vaccine like this year. It is highly recommended by doctors and pediatricians because it would seem to give extra protection against the face that, for months now, has been putting a strain on world health, Covid-19. But what to do if you are expecting a baby? Is the flu vaccine in pregnancy recommended? Are there any risks? It is important to take stock now, which is the ideal time to get vaccinated.

What is the flu

We all know it. Influenza is a respiratory disease that presents with various symptoms and causes one billion cases worldwide each year. It is transmitted mainly through the droplets spread through coughing and sneezing or with direct or indirect contact with respiratory secretions. The incubation period is usually 2 days, but can range from 1 to 4. Children and people with weakened immune systems tend to be more contagious. In Del Paese, influenza usually peaks around the Christmas period, but there are regional differences.

Influenza vaccine in pregnancy: yes or no?

There are some categories of people for whom vaccination is more recommended, especially because of the complications that the flu can bring. Yes, because the flu is not a trivial "seasonal illness", but a disease that can have serious repercussions. Even in those who are pregnant.


In the circular of 4 June 2022 of the Ministry of Health (Prevention and control of influenza: recommendations for the 2022-2022 season), in the first place of the subjects for whom vaccination is advocated there are "women who at the beginning of the epidemic season found in pregnancy or in the postpartum period ". Then follow the elderly, adults and children with pathologies (for example cardiovascular or to the respiratory system), doctors, police forces and so on.

Influenza vaccine in pregnancy: why do it

In general, the flu does not give serious symptoms, but classic ones that include fever, headache and throat, pain, sometimes gastrointestinal disturbances. In some cases, however, the situation can worsen, sometimes (in extreme cases) even with fatal outcomes.

So why get vaccinated during pregnancy? The answer to this question is simple: the pregnant woman could experience complications from the flu. That is why it is so important to prevent it. In fact, during pregnancy, the immune system is weaker and therefore it is easier for it to be "attacked" by external agents. The risk is higher if the expectant mother has asthma or diabetes or if she is obese.

In particular, complications could be respiratory, such as bronchitis or pneumonia. Or the expectant mother could become dehydrated, for example due to a high fever or vomiting or diarrhea. In addition, the fetus could also be affected, with growth retardation, preterm birth or intrauterine death.

In short, no, it is not a simple seasonal disease, but rather a pathology in all respects not to be taken lightly.

The flu vaccine in pregnancy protects the baby for 8 weeks after birth. These are the results of a study conducted by the Universities of Johannesburg and Colorado, published in Jama Pediatrics). The study examined, for the first six months after birth, the children of women who had previously participated in a clinical trial on the safety and efficacy in pregnancy of the trivalent inactivated vaccine for influenza: 1026 were born from vaccinated, 1023 from mothers who had received placebo.

Influenza vaccine in pregnancy: in which trimester

In fact, there is more safety data available for the second and third quarters than in the first quarter. In any case, recommendations from international health authorities, such as the European Center for Disease Prevention and Control (ECDC) and the World Health Organization (WHO), point to influenza vaccination regardless of quarter.

Influenza vaccine in pregnancy: when to do it

In Del Paese, the flu vaccination campaign typically runs from mid-October to the end of December. The protection induced by the vaccine begins 2 weeks after administration and lasts on average 6-8 months and then decreases. This explains why it is necessary to get vaccinated every year.

After 2-3 weeks from the vaccine, the mother passes the antibodies to the fetus. This guarantees a protection of 50-80% in the first months of the baby's life.

Which flu vaccine to choose during pregnancy

The vaccines available in our country are authorized by the European Medicines Agency (EMA) and / or by the Medicines Agency Del Paesena (AIFA). Each year, the Regions decide which ones to use during vaccination campaigns. Generally, vaccines are divided into:

For pregnant women, the first is indicated, that is, in which the virus has been destroyed and the vaccine has been purified. It is therefore an effective product, but harmless for the woman. Vaccines containing attenuated viruses, such as rubella, are prohibited during pregnancy. They can be dangerous because, in fact, the virus is still active.

Side effects of the flu shot

Like everyone else, the flu vaccine can also have some adverse effects. The health authorities, however, speak of mild phenomena and not connected to any infections. Common side effects consist of local reactions, such as pain, erythema, swelling where the injection is followed.

There may also be common systemic reactions, such as general malaise, fever, muscle aches, which may appear 6 to 12 hours after the administration of the vaccination. They usually last 1 or 2 days. Rare events such as thrombocytopenia, neuralgia, paraesthesia, neurological disorders and severe allergic reactions have been reported in temporal correlation with influenza vaccination. The causal relationship between influenza vaccine administration and these adverse events has not been demonstrated.

Based on current data, vaccination has no negative consequences on fetal development, childbirth or postpartum. Furthermore, pregnant women do not have more side effects than the rest of the population.

Influenza vaccine in pregnancy: when to postpone it

According to Aogoi, the Del Paeseni Hospital Obstetricians Gynecologists Association, the same recommendations made to all citizens apply. In particular:

add a comment of Influenza vaccine in pregnancy, why do it