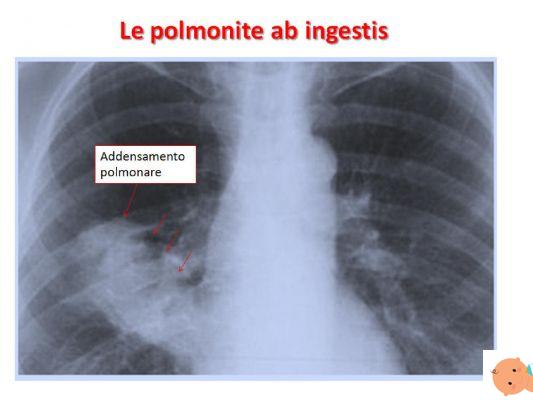 What is Inhalation Pneumonia

Pneumonia is inflammation that can affect one or both lungs and is typically caused by viral or bacterial infections. Sometimes, however, it can be caused byI get into the lungs of something that shouldn't be there, such as liquids (milk, vomit) or solids such as small pieces of food. In this case we speak of inhalation or aspiration pneumonia.


Generally, the body manages to prevent food, liquids and other substances from remaining out of the lungs and airways, but it can happen that something escapes, causing (depending on the case):

"If the amount of foreign substance is small, limited, usually inflammation is created with limited damage to the tissue, which can cause cough. If the amount is higher, it can lead to pneumonia" he explains. , head of the Bronchopneumology Unit of the Bambino Gesù Pediatric Hospital in the city.

Every year more than 50 children lose their lives by suffocation because those who were with them at that time did not know how to remedy the emergency situation. So here's a ...

The risk of suffering from aspiration pneumonia increases in particular conditions, that is:


"As for the healthy baby, without other specific conditions, the infant or the small child is more at risk, especially if he is fed in inappropriate positions" explains Cutrera. "It can happen, for example, with bottle feeding if the baby is kept in a lying position rather than a semi-sitting position: the position, or perhaps a sudden cough, can facilitate the passage of milk into the airways".

Symptoms are similar to those of infectious pneumonia, "with the difference that this is usually preceded by a cold or laryngitis", specifies the specialist. So it is a cough followed later by fever, difficulty in breathing, wheezing or noisy, lips or skin turning blue. With coughs there may also be the emission of a mucus of yellow-green color or foul smelling or streaked with blood. If you have these symptoms, see your doctor, especially if they start after something has gone wrong.

Often the diagnosis is based both on clinical examination (ie the condition in which the child is), and on instrumental tests such as chest X-ray or CT scan.

Read also: Recurring infections: when the child is always sick

Treatment depends on the exact symptoms and causes of aspiration pneumonia: in case of infection it is usually necessary antibiotic treatment. Also it may be necessary suck up any liquids inalati fr remove any solid foreign bodies with a bronchoscopy, (a rather delicate intervention, both because the airways of children are really tiny, and because there is the risk of crushing the foreign body, with possible risks associated with this event).

They may also be needed supportive therapies such as oxygen therapy, fluid therapy, physiotherapy.


In February 2022, a 20-day-old child died in Turin a couple of days after being discharged from an emergency room with the diagnosis of a cold and the prescription of nasal washes and aerosols. Unfortunately, however, in the following hours his symptoms worsened until there was nothing more to be done. Pending the results of the investigation, it is suspected that he may have had one breast milk inhalation pneumonia.

The suspicion raised concerns about the safety of breastfeeding, but , head of the Bronchopneumology Unit of the Bambino Gesù Pediatric Hospital in the city, was absolutely reassuring: "The position taken during breastfeeding generally reduces the risk compared to what happens, for example, when feeding with baby bottle. Furthermore, with breastfeeding - which requires a considerable effort on the part of the baby in sucking - it is more difficult for large quantities of milk to arrive ”.

She also expressed herself on the subject Ibfan Of The Country (International network of action for infant nutrition), underlining with a statement released via Facebook that:

“Various materials (liquid or solid) can be directly harmful to the airways or stimulate an inflammatory response when they come into contact with them. In the case of a breastfed baby, it is a very rare probability, but still possible that some breast milk can reach the airways giving rise to the aforementioned reaction. However, the same can happen with artificial milk (formula), herbal teas, chamomile or nasal washing liquids. The advantages of breastfeeding are such and many that they do not in the least question its usefulness ". 21 PHOTOS

Every year in Del Paese about 50 children under the age of 4 lose their lives by suffocation. Food is responsible in 70% of cases. This is why Sipps, Società Del Paesena of ...

Other sources for this article: Healthy Children site edited by the American Association of Pediatricians; in-depth study on aspiration pneumonia from the information service for specialists Up to Date.

TAG:
The presence of the mother relieves the pain of the children ❯

add a comment of Inhalation pneumonia or ab ingestis