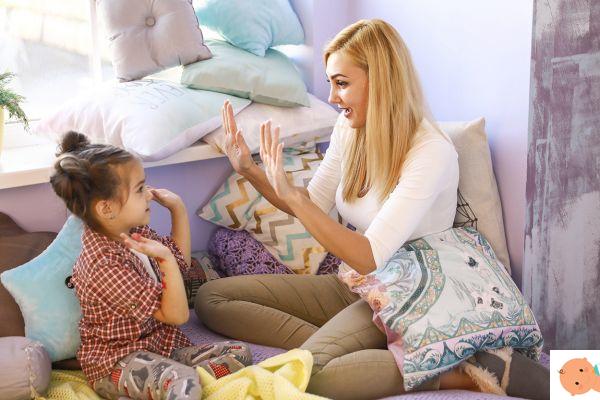 Today's families are increasingly enlarged and the support that family members can give to parents is often strategic. Provided that a correct safety distance is maintained. To defend against invasions of the field (perhaps done without malice, but still invasions) and to preserve the serenity of all, including grandson, here are the advice of Sara Piattino, psychologist, psychotherapist and research doctor at the University of Genoa.

1. Do not create confusion of roles


They love their nephew, they enjoy being with him, their affection is reciprocated: all is well, but without exaggerating. Because there is a risk of creating confusion between the roles of parents, grandparents and uncles, who instead must remain distinct and separate figures. The risk? That conflicts between couples and family disagreements arise, which would harm everyone, adults and children. It is therefore good that the parents first understand this distinction and take it into account.

Read also: The role of uncles and aunts in the education of nephews


Sometimes, in fact, it is the parents themselves who let their spaces be invaded. From conception, perhaps because it is the first experience and one feels inexperienced, they let the uncles enter the nascent family on an equal footing, often because they are already parents with experience and generous with good advice towards the future mother and the grandson still in her womb. . Since pregnancy, however, it is better to maintain the right balance between proximity and distance. On the other hand, if they did it, we can do it too!

3. Try to plan (as far as possible) meetings and visits
Once the baby is born, the likelihood of loving uncles swooping into the house at any time of day is high. Better to make it clear immediately, in a soft way, that sudden visits are not welcome, perhaps highlighting that when the child sleeps we prefer to be alone at home to rest or keep silence.

4. Don't go along with every request or self-invitation
Do I come and bring the lunch ready? Can I pick you up and let's go out together? Sometimes that's fine, but you risk getting into a dangerous routine. We don't always say yes just out of politeness or out of fear that the caring uncle gets offended: sometimes to avoid conflicts it is better to immediately set boundaries and say a polite no.

Read also: How to defend yourself from intrusive relatives

5. Go around the obstacle
Does he not understand (or does he pretend not to understand?) The antiphon and telephones proposing to come to dinner? More than a clear "no", better to say: "I'm sorry but we are not there tonight", or "I would be very happy but we promised our son that we would watch a cartoon all three together". Adding that maybe we will organize a pizza with them for the weekend. In this way the message passes that the uncles are not part of everyday life, that their presence is precious "one off" and that there is a clear separation between the family unit and the "third" elements.


6. Send the relative parent on an advance search
Do uncles seem intrusive to us and are we afraid of creating diplomatic incidents? Let the clarification be addressed by the uncle's direct relative parent. If it is about our husband's sister, for example, after sharing our reflections with the partner, we let him address the issue with his sister and avoid direct confrontations, which would not only damage relations between brothers-in-law, but would create conflicts within the couple, because the husband would find himself between a rock and a hard place and in reaction he could take the defense of his sister.

Read also: 10 golden rules to be a good grandparent

1. Offer help but don't impose yourself

It is perfectly fine to offer help to parents, especially if they work and we have more time available. But do not be insistent and do not pretend to choose the type of help, for example by proposing to take care of the child while the mother is thinking about the housework. And we respect the hours of the house, agreeing in advance what time we could go to visit the child and avoiding presenting ourselves at the time when we know that he is taking a nap or eating food.

2. Take a break from time to time so as not to become addictive
Dating is nice, especially if the child seems to like it, but every now and then let's step aside, so as not to induce a continuity that could become an addiction. There would be a risk of creating excessive attachment and of altering some evolutionary mechanisms, such as the Oedipus and Electra complexes which during growth are physiological towards parents, not uncles.

3. Don't oppose parental rules
Not being intrusive means always asking parents first if we can do something with the grandchildren; and if the parent says no it's no, even if we don't share. At the same time, if the nephew makes a request on which it is already known that the parents disagree, one must not indulge him, only for the pleasure of complying with his desires and passing for the "good" uncles: if the parent gives a pocket money of 3 euro, the uncle does not have to give him a 5 euro. If anything, he gives him a gift every now and then, which by its very nature is perceived as a "one-off".

Read also: Sleeping with grandparents for one evening

5. If the nephew behaves in a way that is wrong for the uncle, act diplomatically
It is a delicate situation, especially if in our opinion certain wrong behaviors are induced by the parents themselves. Without prejudice to the fact that the direct uncle should always intervene, one can intervene "hot", that is when an event occurs and one of the two parents is exasperated by the child's attitude. At that point, a possible behavior can be discreetly suggested (“I would try to…” “why don't you try to…”); or, even better, an external example can be given, of the couple who had the same problem and solved it in a certain way. Or, instead of giving direct advice, the uncle can behave with the child in a way that is consistent with his own way of thinking, offering an example of how a different approach can have better effects on the child's upbringing.

Read also: 10 psycho tips for a holiday with children (and suitable for children)

6. However, if we understand that our intervention is not appreciated, it is better to leave it alone
If we perceive that the parent considers our advice or interventions as intrusive, it is best to leave it alone. Even if we are convinced that we are right, even if we have all good intentions, let's step aside: the risk is that relations between families will deteriorate. And that would be a real shame!

TAG:
Zika and pregnancy: everything you need to know for holidays in risky countries ❯

add a comment of Intrusive aunts and uncles: 6 tips for parents and 6 tips for uncles