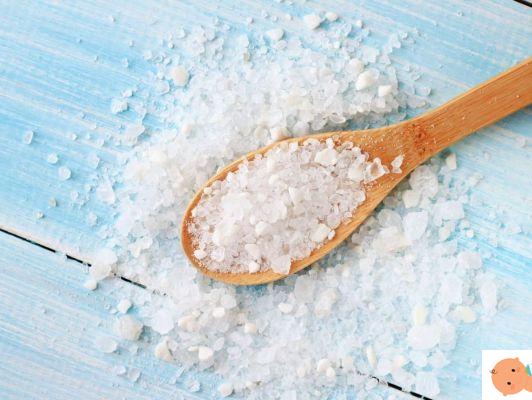 "Little salt, but iodized", this is the recommendation of the Istituto Superiore di Sanità which is often repeated. While it is now known that an excess of salt is harmful to health, on the other hand we should always remember the importance of iodine, especially for future mothers.

Iodine, contained in some foods and added to table salt, is an essential mineral for it brain development of the fetus and in case of maternal deficiency the child could present some cognitive deficits.

During pregnancy, the need for iodine increases by 50% and, since the risks associated with an iodine deficiency cannot be underestimated, it is important that the woman undertakes to meet the daily requirement of this mineral, especially thanks to the use of iodine. sale iodato.

Iodized salt, an ally for the health of mother and baby

Not enough talk about it yet, but everyone should know that proper iodine intake is essential for health of the organism. Unfortunately, according to the data that emerged from the monitoring of the Istituto Superiore di Sanità, Del Paese takes too little of it.

The topic of iodoprophylaxis had already been addressed a few years ago at the 70th Congress of the Paeseno of Pediatrics, where it emerged that less than 23% of doctors recommend iodized salt instead of common salt for patients and pregnant women. A not very encouraging figure, given that the iodine, contained in the iodized salt, is fundamental for the right functioning of the thyroid gland maternal and for the correct development of the fetal thyroid.

If mothers-to-be do not take adequate doses of iodine, they can develop a deficiency of this precious mineral, thus increasing the risk of negative effects on their baby's health.

So what happens if the right amounts of iodine are not introduced during pregnancy? The risks can be many, but it also depends on how severe the deficiency of this mineral is.

Generally, we know that an iodine deficiency during pregnancy can cause a slowing of mental development of the unborn child that lasts at least up to ten years of life, as indicated in this study published a few years ago in the scientific journal The Lancet. The researchers have in fact analyzed the urine of more than a thousand future mothers, determining the iodine concentration, and dividing them according to WHO indications between those with an optimal value, above 150 micrograms per gram, and those with deficiency, below this threshold. The children of the women tested underwent an IQ test at age eight and a reading test at age nine. "Children born to women with iodine deficiency - the authors write - were significantly more likely than others to have scores below average, and once the group was broken down we found that the lower the concentration, the lower the average scores obtained by the children".

To be more precise, in a research published in the journal Pediatric and Perinatal Epidemiology, it was possible to estimate a average reduction in IQ (IQ) of 12-13,5 points in children whose mothers had iodine deficiency.

But the problems, unfortunately, do not end there. As noted in the Del Paesena Society of Gynecology and Obstetrics Recommendations on nutrition in pregnancy, an iodine deficiency could also cause:

And in the event of a severe shortage, rare in our country, the risk of abortion and neonatal death also increases.

It is therefore very important that all women who are expecting a baby, or who wish to have one, take the right amount of iodine daily. Let's see in detail what is the needs of women during pregnancy.

The iodine requirement for expectant mothers

During pregnancy, the need for iodine increases from 100-150 micrograms per day to approximately 200-250 micrograms. The increase is due both to a renal loss of iodine linked to increased diuresis, typical of pregnancy, and to the need to increase hormone synthesis by the thyroid of the future mother, essential for the development of the fetus and placenta.

Thanks to a varied and balanced diet that includes fish, dairy products and above all iodized salt, it is possible to meet the daily needs and avoid the use of supplements. In this regard, a study published in The Lancet suggests women expecting a child to commit to reaching the indicated iodine quota through food, avoiding supplements that could lead to an overdose.

As indicated in the guidelines of the CREA, The Council for Research in Agriculture and the Analysis of the Agricultural Economy, "iodized salt should not be confused with" sea salt "or" whole salt "or other salts since their iodine content is negligible. Iodized salt is not a dietary product intended for particular categories of individuals, but a food that must become commonly used for the entire population, recommended by both the World Health Organization and the Ministry of Health ".

Where is iodine and how to get enough

We can find iodine:

To get a good iodine intake it is therefore important to eat fish about 2/3 times a week, eggs and dairy products. Iodine is also found in cereals, fruit and vegetables, but in very small quantities.

In reality, however, the most consistent help to satisfy the iodine requirement is given by the sale iodato and not from food itself. In fact, even in the foods mentioned above, with the exception of fish and shellfish, the quantities of iodine are low and it is for this reason that it is very important to take iodized salt daily. Indication on which the Istituto Superiore di Sanità has been insisting for years. At the supermarket, therefore, the best choice you can make is to always prefer iodized salt, a precious ally for your baby's health.

To emphasize the importance of iodoprofilassi, one has been approved in our country for more than 15 years law (Law n.55 of 21 March 2005) which guarantees that iodized salt is present in the points of sale, distinguishable from other types of salt thanks to the presence of a blue stamp.

The indications on the use of iodized salt are not in contrast with the WHO recommendations on the importance of reduce the consumption of salt (no more than 5 grams per day for adults, 2-3 g in children after one year of age) for the prevention of some diseases related to excessive salt consumption.

As also highlighted by the Del Paesena Medical Endocrinologists Association, in fact, every gram of iodine-enriched salt provides 30 micrograms of iodine in addition to that already present in food. In this way it is possible to obtain an adequate intake of iodine while remaining within the limit of the famous 5 grams of salt per day.

TAG:
Salmon in pregnancy. It's possible to eat? ❯