Isis, explained to our children 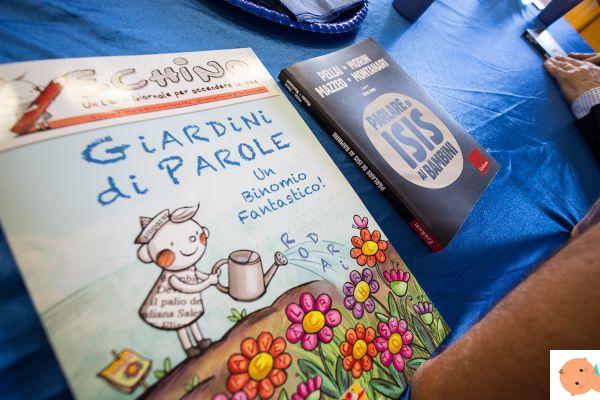 “Mom, Dad, why were all those people killed in the Orlando bombing? Can terrorists also come here in Del Paese? Do they also affect children? ". After the tragic night in Paris last November which inaugurated a new climate of tension in Europe, the attack in Belgium and the latter in the USA, in Orlando, the little ones found themselves faced with a dramatic scenario, difficult to to interpret. In some cases, closing in on silence was the only possible reaction, in others, the questions came direct and full of anguish. Many parents have found themselves displaced by this situation. To tell what is happening or not? How? What is the right age to start talking about it?


First, let's try to shed some light on the current scenario.

"Isis - from Islamic State of Iraq and Syria - is an Islamist terrorist group which, unlike other similar realities, directly governs a territory and its population ”, explains Stefano Maria Torelli, ISPI researcher specializing in Middle Eastern issues. In thethe area it controls, straddling Syria and Iraq, has organized a state with its own laws, the control of administrative aspects, economic resources and raw materials. The current size of its territory is similar to that of Great Britain ”.

How was it born?

What is now known as Isis or IS (from the English Islamic state, Islamic state), has its origins in the context of the Iraqi war, in particular after the intervention of the United States in 2003. "With the fall of Saddam Hussein - adds Torelli - the state has plunged into a sort of internal war between Shiite and Sunni factions, two different currents of Islam present in the area. In the same period, Al Qaeda, another well-known Islamic terrorist organization, had set up its own cell in Iraq which was called Al Qaeda in Iraq and depended on Osama Bin Laden (famous for having organized the attack on the twin towers in New York of the 2001) ".


“After nearly four years of existence, the group has been almost completely wiped out by Iraqi and American forces. But the outbreak of the war in Syria in 2022 allowed the few survivors to find new ground on which to operate. With the conquest of part of Syria and Iraq in the following years, the group changed its name to make the objective of its action clear, transforming it into the Islamic State in Iraq and Syria, Isis ".
Since June 2022, the group has announced the establishment in the territories under its control of a "caliphate", headed by its leader Abu Bakr al-Baghdadi ".

What is the relationship between Isis and the Muslim religion?

“Isis is a movement that it uses part of the ideology of Islam for its own ends but totally betrays the real message of Islam”, Argues Torelli. In addition to the religious aspect, there is also that of the violent actions committed by the terrorist group, which "in many cases target Muslims themselves". "All the major representatives of Islam at the institutional level are in agreement in condemning what Isis does and distance themselves from it: 'Isis is not Islam' is one of the most famous slogans that reaffirm this concept".

Why are ISIS fundamentalists attacking Europe?

"The problem is the connection between Islamic radicalism in the Middle East with the unresolved problems of the integration of part of the Muslim immigrant population in Europe - says Maurizio Ambrosini, professor of Sociology of economic processes at the State University of our city and expert in migrations -. It is a problem of integration of the Muslim population and, in particular, of ability to offer young people alternatives for a good life and religious freedom in the West to prevent them from falling into the trap of fanaticism and despair".

Who are the terrorists and where do they come from?

"Most terrorists were born and raised in Europe, are second generations of Islamic origin or professionals, often respectable ”, adds Ambrosini. The pattern according to which ISIS would export terrorists to Europe is incorrect, “it may be that some of the European radical fanatics have gone through the Syrian experience to train and then return to Europe. The problem therefore is first of all internal to Europe ”.

Why did they hit France, Belgium and other European countries and not the country?

"The first explanation is demographic, in Del Paese we have few second generation Muslims, we have fewer young Muslims who grew up in Del Paese and who have matured in school expectations and hopes for the future that are not fulfilled". But not only. "We have few and small urban ghettos compared to other European countries ".


In such a complex scenario it is important to understand what to tell your children, to help them understand the situation without alarming them excessively.

His answer at every age

There are roughly three age groups, the one up to 5 years old, the one from 6 to 10 years old and the one from 11 to 13. For each of these a different approach is needed. "For the little ones it would be necessary to avoid any contact with this type of news - explains Giovanna Capello, child psychologist and head of the Childhood and Adolescence section of the CSTCS in Genoa - unfortunately, parents often fail, sometimes they talk about it or watch the news in front to their children thinking that being very young they cannot understand but it is not like that ".

What to say to the little ones

Before the age of six it would be desirable not to allow children to access information and violent images, in case this happens it is important to explain something to the child anyway. What can be said, adds Dr. Capello, is, for example: "In the world there are the good and the bad but then the good ones make sure to organize themselves and since the bad ones are far fewer, the good ones will do everything to have the better, to punish them and put them in prison ”.

What to say to children up to 10 years old

A child of this age must be informed but also protected: "He must understand what is happening, he cannot hide the terrible things that are happening from him (he will hear them anyway at school or see them on TV or on the internet), and at the same time he will have to be reassured, in particular that adults are thinking about the problem and that they are trying to solve the problem ". A very complex thing must then be explained to him: “We are not talking about war in the classical sense, a concept that children learn very quickly, but about terrorism”.

What we can tell them is: “Terrorism is the work of a few who have decided to destabilize the world, hitting it at random, throwing bombs. Since there are very few people who are inside terrorist organizations, the organizations of the world - that is, states, nations, presidents, police, authorities - are organizing themselves to stop them ”. It is important to know that “the younger a child is, the more it is necessary to tell him clearly that evil will be defeated sooner or later. Children play war, their desire is to win, so they can understand these concepts ".

When it comes to pubertal onset things change, because children no longer believe in the absolute and indisputable power of adults, they question the omnipotence of their parents. "At this age, children need to hear the truth: that things are serious and that the only way to counter the tragedy of terrorism and the brutality of this type of war is to inform themselves".

With the adolescent, you can take a map, newspaper articles or other in-depth texts and explain as clearly as possible what is happening, even asking for help from the school.

“With adolescents we must be careful to avoid the construction of the enemy - continues Dr. Capello - also because society is increasingly multicultural and the Islamic boy is in many cases their classmate. So it is necessary to explain very well, outside the ideologies, what is happening. Pre-adolescents need to understand better and to formulate their own thoughts on what is happening, as less stereotyped as possible ".

For younger children crying will be a normal reaction. “If the baby cries, he can be comforted and reassured by telling him that the terrorists will be punished. Crying is right, because he weeps for the death of innocent people and we cry with pain, not fear ”. If, on the other hand, the reaction will be silent, it is necessary to carefully evaluate which approach to use: “When the child closes in on himself, it takes flexibility in perceiving what is happening. Often there is a difficulty in asking for explanations on the subject, there is embarrassment, you keep everything inside. Sometimes nightmares may appear to exorcise anxiety ”. The best thing to do is obviously to seek a dialogue with the child.

With older kids instead it is different. “A search for silence, for moments of retreat in one's room is normal and acceptable”. To help them, dialogue comes into play here too: “The more they talk, the more they want to know, the more scared they are, the more they need to see that parents are interested in their fear and want to help them, the more things are resolved”.

Angelina Jolie, 39-year-old actress, together with her 51-year-old husband Brad Pitt already has six children (three biological and three adopted), would have decided to take another child with her, a Syrian orphan ...

On our forum we also talk about gossip and TV

add a comment of Isis, explained to our children