Itching in pregnancy: how to relieve it, when to worry 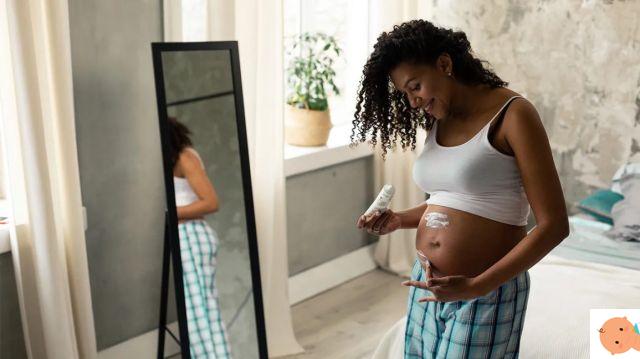 Itching is a fairly common symptom in pregnancy. The pruritus pregnant appears in 20% of women (one in five), usually in third quarter, and typically affects the abdomen, "he says Valentina , gynecologist and phytotherapist. It is usually one physiological condition and apart from a little annoyance, it doesn't involve any problems. Only more rarely the itching can be spy for other diseases: in these cases it usually also affects other parts of the body or is accompanied by rashes.

Itching in pregnancy, how to relieve it? The answer in the podcast

How to relieve itching in pregnancy? And when to worry? Answered by Dr., midwife at Studio Intreccio Treviglio https://www.facebook.com/studiointreccio/

Itching in pregnancy: causes and symptoms

Why do you get itchy during pregnancy?

"In the vast majority of cases the pruritus appears in the third quarter, when the belly begins to increase in volume significantly e the skin stretches and tends to dry out. That's why it typically affects the belly, "she says. The" normal "itchiness of pregnancy can also affect the thighs and hips.

Symptoms of itching in pregnancy

About one in four or five pregnant women suffer from itching, which is therefore a fairly common condition in pregnancy. Generally,

but sometimes it can also extend

Itching in pregnancy: how to relieve it

"The first thing to do is avoid scratching, because the micro-lesions from scratching in turn create itching "advises the gynecologist. Another thing to do is to evaluate if it has not developed an intolerance or allergy to any cosmetic product - creams or oils - that you may be using on your stomach, for example to reduce the risk of stretch marks. "To verify it, just do a simple test: discontinue the cosmetic for a few days and see what happens. If the symptom improves it means that it is better not to use that cosmetic anymore, if it remains unchanged it means that the causes are other ".

To give relief, moisturizers and emollients can be used, possibly containing menthol, which has a cooling effect. "And always to help the skin, avoid too foaming detergents, which tend to dry it out, preferring delicate products for sensitive and intolerant skin instead, "he says.

Itching in pregnancy throughout the body

In some cases, rare or very rare, in fact, it can be symptom of other conditions, dermatological or other, which can give rise to obstetric complications. For sure the doctor should be consulted if the itching is intense and affects other parts of the body besides the abdomen, and if it is accompanied by a rash.

The body is more sensitive in pregnancy. An intimate itch can be caused by underwear made of synthetic fiber, or too tight and not very breathable. But it can also occur after sexual intercourse. In these cases it passes quickly.

If it is accompanied by foul-smelling vaginal discharge or it is a persistent itch it could be the symptom of a Candida or a vaginal infection and you need to talk to your doctor.

First, it is important to use a non aggressive intimate cleanser, possibly non-foaming, specific for pregnancy and delicate. In addition, natural chamomile-based creams can be useful. It is always important to speak to your gynecologist before using any remedy, even natural ones.

In the second trimester the body begins to change a lot: the skin is subjected to extraordinary pressure and it is common for it to pull, be red, itchy and first stretch marks. It is time, if we have not started yet, to apply a specific anti-stretch mark cream on all sensitive areas, such as stomach, inner thighs, breasts, hips.

Persistent itching, especially in the hands and feet, should be promptly reported to the doctor.

Itchy legs can be caused by excessive dry skin - in this case it is enough to always keep the skin hydrated - or by a circulation disorder that can be accompanied by the appearance of varicose veins. If the itching does not go away, it is important to contact your doctor.

Itching in pregnancy: when to worry

When should you ask your doctor for advice?

As we have said, itching in pregnancy is generally a physiological condition, which does not involve any risk for either the mother or the baby. "It is always worthwhile anyway talk to your doctor, even if it is a mild symptom, to be sure it is not associated with other diseases, "he advises.

When it is not a physiological condition, pruritus during pregnancy can depend on some diseases in particular. Between these:

How to relieve itching in pregnancy?

"With the exception of cholestasis gravidarum, which involves therapy with ursodeoxycholic acid, the other diseases mentioned are generally treated with antihistamines and cortisone creams to alleviate the symptoms "he explains." Only in particular cases may oral cortisone be necessary ".

Other sources for this article: item Pruritus in Pregnancy, published in Canadian Family Physician.

What are the natural remedies for itching in pregnancy?

To remedy the itchiness in pregnancy it is necessary to keep the skin naturally hydrated and avoid the use of harsh cleansers. The use of moisturizing oils allows to elasticise the epidermis, preventing the formation of stretch marks.

What is choleastasis of pregnancy?

Cholestasis is a fairly rare disease (1-2% of pregnancies) that causes itching first on the soles of the feet and hands, then generalized. It should not be neglected as it can put the baby's health at risk.

Read also: Pregnancy, this is how your body changes TAG:
Itching in pregnancy, what you need to know ❯

add a comment of Itching in pregnancy: how to relieve it, when to worry