Journey into the mind of babies to find out if they dream (and if so, what) 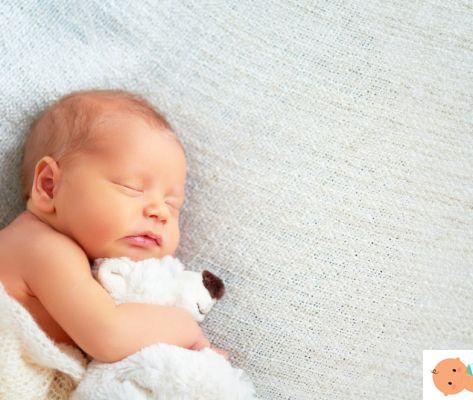 One of the most fascinating journeys that can be made in the mind of the child who has just come into the world begins with the question: "The newborn moves and makes faces when he sleeps: does he dream?". Understanding the dream activity from the first months of life (and even when they are in the mother's womb!) And if babies dream it is a way to discover interesting points of view on the evolution of children in the early years but not only: the research and theories on the subject are also interesting to understand if there is a fetal memory, that is a memory that is already formed in the mother's womb . A fascinating journey into one of the most mysterious skills of all, the one that comes from the ability to make dreams.

But do babies dream?

The baby's sleep is a fundamental element of his growth, of the strengthening of his memory and obviously of his physical energies. According to many researches, the child's language skills are the result of the work of his brain in his first years of life as explained in the research "Early gray-matter and white-matter concentration in infancy predict later language skills: A whole brain voxel-based morphometry study "by researchers at the University of Washington. And this "work" also includes the dream capacity, that is the ability to dream. But do babies have it or not? Researchers are not in agreement in giving an answer and this is because the brain of the newborn is an organ in continuous evolution, still in formation after the months lived in gestation.

In the psychologist's book David Foulkes which is titled "Children's Dreaming and the Development of Consciousness" confirms, at least from his point of view, that children do not dream in the first years of their life. According to this scholar, this does not happen because the perception of reality that newborn babies have does not imply that they may even dream of one. In the book, the psychologist explains that they do not start dreaming before the age of 2, imagining what they perceive spatially and visually in non-dream life. A sort of dream-like representation and re-elaboration, rigorously one-dimensional, of what they experience while awake. According to Foulkes, children begin to dream like adults from the age of 7, with a well-defined and sometimes cinematic structure. They begin to do this at a time when children are self-affirming, discovering autonomy, trying to define their identity.

But this theory on babies who do not dream has been surpassed by more recent studies. In the beautiful paper How Babies Think by Alison Gopnik, a child psychologist at Berkeley, we talk about how REM phase, recognized by experts who have deepened the contours of this state of consciousness over the years, both connected to dreams. And this is because, as the whole dream theory which has been studied in depth by experts since the XNUMXs, most dreams are concentrated in the REM phase. The first scientists had studied everything through the rapid eye movements of the people who were immersed in it and these researches have multiplied over the years especially with respect to children, who in the REM phase (which lasts a greater amount of time than that of adults , as young children need more sleep than they do) consolidate memory and skills acquired during the day.

But not only: in the research "The reinterpretation of dreams: An evolutionary hypothesis of the function of dreaming" published in the journal Behavioral and Brain Sciences, dreaming also has an adaptive purpose, in the sense that we unconsciously process what frightens us or scares us during the day in a way we need to fight those same fears. Although the experiences of children and infants are necessarily inferior to those of adults and do not have linguistic skills to express them, it would be an understatement to say that they have no emotions, feelings or fears. Dreaming as an adaptive capacity to external dangers is in this sense almost a primordial instinct which therefore, according to the latest dream theorists, also exists in newborns albeit in a very complex form.

What do newborns dream about

According to The American Academy of Pediatrics, newborns spend 50% of their time in the REM phase, the phase in which the body is abandoned but the brain is still active. This means that, if they dream as neuroscientists say today compared to their colleagues of the sixties and seventies, they really dream a lot. The real difficulty for experts to understand what babies dream of is that they cannot speak. The linguistic inability linked to their very young age, even cerebral, means that studies in this sense are very nebulous: to dream, neuroscientists say that children must acquire the typically human capacity (and which distinguishes us from animals) to to imagine the things. They must be able to visually build what they experience to dream as we adults understand the dream.

What do babies dream of when they laugh?

Babies who smile are certainly a beautiful sight for those who look at them. But why do they do it? Maybe they are dreaming of something that caused them to move their lips? In the research "Sleep physiology and sleep disorders in childhood" published in the journal Nature and Science of Sleep it is suggested that often, when babies laugh during sleep, it is involuntary muscle movements. There is, most of the time, no correlation with some mental state that causes babies to smile in response to a dream, for example.

There are also various pathologies related to the sleep of children starting from 10 months and which often crystallize in these involuntary movements of the muscles of the face. One of the most feared is undoubtedly epilepsy, which can also cause nocturnal seizures. For this reason, it is always good to monitor newborns while they sleep, not only to be fascinated by their intense cognitive activity but also to pay attention to the most important signals.

Do babies have nightmares?

Nightmares are a universe of their own, which brings into play, in addition to the dream activity in the REM phase, also the fears in children crystallized in a dimension that they often cannot distinguish from the dream. Why then babies cry in their sleep? Neuropsychiatrists agree that the phase of nighttime terror and panic in children begins at a more mature age, around 18 months. These are episodes that make the child awaken several times a night in an inexplicable panic and worsens around the age of 4 and up to 10. Sometimes he remembers what caused him to fear, other times not. In any case, it is the parents who must help him sleep well, accompanying him in the deepest phase of sleep in the most peaceful way possible and excluding respiratory or gastroesophageal problems that can exacerbate this phase.

In the case of newborns, the same speech as for dreams applies to the nightmare: although the technology of neuroscience is now advanced and precise analyzes can be made on the brain of the newborn while sleeping to understand its contours and how far it can go, without the language correspondence it is very difficult to understand what they dream and if these dreams turn into nightmares. Crying in such young children remains an effective form of communication both at a conscious level and in sleep: if this becomes insistent it is necessary to contact the pediatrician to understand if the crying is related to a physical condition, rather than a psychological one. If, on the other hand, it remains a circumscribed episode, it may be one of the many signals that such young children send, in their own way, to the outside world. To make themselves understood and to allow adults to enter their fascinating inner world.

Fonti per l'articolo: Brain and Language, "Early gray-matter and white-matter concentration in infancy predict later language skills: A whole brain voxel-based morphometry study"; David Foulkes 2002, "Children's Dreaming and the Development of Consciousness"; Alison Gopnik, "How babies think"; Behavioral and Brain Sciences, "The reinterpretation of dreams: An evolutionary hypothesis of the function of dreaming"; American Academy of Pediatrics, "Stages of Newborn Sleep"; Nature and Science of Sleep, "Sleep physiology and sleep disorders in childhood"

TAG:
Month after month pregnancy video: a look into the baby bump ❯

add a comment of Journey into the mind of babies to find out if they dream (and if so, what)