Kristeller's maneuver: what it is, what it is for and the consequences 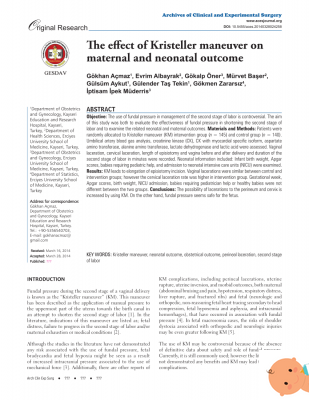 Some mothers report having given birth with one pressure on the belly by the midwife. This is the so-called Kristeller's maneuver.

Among the best known obstetric maneuvers, that of Kristeller is rather debated. If, on the one hand, in fact, it is still used in Del Paese to let the child go down the birth canal and go out, on the other hand there are many contraindications and conflicting opinions on this practice.

Let's find out everything about the Kristeller maneuver in this guide.

The Kristeller maneuver is named after the German gynecologist Sanuel Kristeller who was the first to start the maneuver back in 1867.

This maneuver is necessary in the so-called operative birth, a natural birth in which there are two or three operators (gynecologists and obstetricians) who assist the mother during the birth of the child. It consists in carrying out a manual pressure on the uterine fundus during the contraction and the maternal push.

Specifically, the doctor or midwife positioned laterally to the woman, pushes with the forearm to the bottom of the uterus to direct the child into the birth canal and accelerate its birth. The force of the pressure is not always the same, it also depends on the position of the baby, the volume of the amniotic fluid, the birth canal and many other factors that change from woman to woman.

Women who have undergone this maneuver at the time of childbirth, however, speak of it as annoying and painful.

When the Kristeller maneuver is implemented

But, concretely, when do the specialists decide to proceed with the Kristeller maneuver?

This gynecological maneuver it is not always necessary, but only when certain conditions arise in the second stage of labor, such as the mother's fatigue and the exhaustion of her strength, fetal distress, some contraindication to the mother's pressures, such as heart disease or other problems.

It must be emphasized that, in many countries, this maneuver is becoming quite rare. In case of complications it is preferable to avoid the risks of Kristeller's maneuver (which we analyze in the next paragraphs) and opting for a caesarean, for example. In Del Paese there is no prohibition on practicing it.

Because the Kristeller maneuver can be dangerous

L'WHO (World Health Organization) advises against the practice of the Kristeller maneuver. This, in fact, could prove to be dangerous for both the mother and the baby.

In Del Paese the confusion is still great and there are no detailed guidelines on the practice of this gynecological maneuver. It is known that in our hospitals the maneuver is still carried out, but almost never recorded in the birth assistance certificate.

L'Istituto Superiore di Sanita Del Paeseno in 2022 posed a parliamentary question on the subject, bringing the major scientific studies as support to the question and asking for a clear and uniform expression on the matter.

Not recommended, therefore, but not prohibited either.

In light of the above, the consequences of the Kristeller maneuver can be multiple and, in some cases, irreversible.

Consequences for mother and baby in the short term:

Consequences for the mother in the long term:

In addition to the permanent damage that this maneuver could provoke to the little one.

We have collected your testimonies on this practice: here are your stories.

My baby was born unconscious: I remember it like it was yesterday

I still remember like it was yesterday even though it's been 4 years now, those hasty scenes, things you see in movies and you never thought would happen to you. A hug to all those mothers who suffer in silence because despite all the memory is always painful.

My daughter had a cord around her neck and a bandolier. Luckily she was born healthy

My daughter was born with a caesarean section after the midwives tried to give me the Kristeller maneuver and pull her out with the suction cup because the baby was unable to be born. A week after the birth, they called me back from the hospital to urgently do the x-rays

McRoberts maneuver: what it is and when to practice ❯

add a comment of Kristeller's maneuver: what it is, what it is for and the consequences