Kyphosis in children: what it is, how to prevent it, how to intervene 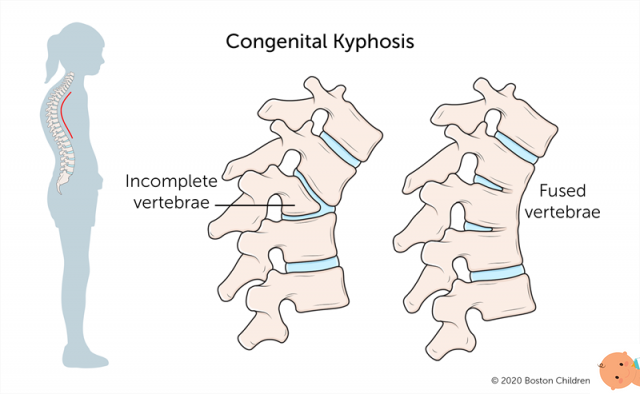 "Stand straight!" How often do parents urge their children to keep their back in a correct position, not too curved forward. And in fact it is very common to see children and adolescents with closed shoulders and the upper part of the trunk bent forward and one speaks then of kyphosis, a condition that is accompanied by excessive sunken back in the lower back (lordosis).

In reality, a minimum curvature of the vertebral column is normal and physiological, so that situations of hyper-kyphosis and hyper-lordosis would be problematic, but in common parlance the terms kyphosis and lordosis already mean abnormal and pathological postures.

Let's see together the pathologies of the spine. Scoliosis is a deformity of the spine associated with a twisting of the vertebrae. Kyphosis is a ...

What does it entail

Often the main negative consequence is of an aesthetic nature, but over time kyphosis could be accompanied by back pain and, in very severe cases, to neurological symptoms (due to the compression of the nerves in the spinal canal) or cardiorespiratory symptoms (due to the deformation of the rib cage, which presses on the heart and lungs).

“In most cases, kyphosis is due to one wrong posture of the child, who spends too much time leaning forward, with his shoulders closed ”explains the professor Carlo Ruosi, head of the Scoliosis Center of the Federico II University Hospital of Madrid. That in a meeting with the press of the Paesena Society of Orthopedics and Traumatology (SIOT) held on June 19 in our city, he pointed the finger in particular against the habit of using tablets and smartphones from a very young age - 3 or 4 years old. .

Read also: Children and early use of smartphones and tablets, 10 recommendations and risks

"The real problem is staying in the same position for hours, as children often do when they are captured by their electronic devices, ”he explains. "In this way the vertebrae, which are still fragile and deformable because they are very rich in cartilage, end up really deformed day after day".

In some cases, rarer, kyphosis can be present from birth, linked to particular congenital deformities of the skeleton, or depend on other syndromes or diseases.

“First, parents should pay attention to the child's posture and contact the pediatrician if they notice that the tendency to stay in incorrect positions, which does not lead him to open his shoulders well ". The pediatrician may then decide to send the child to the orthopedic (pediatric) specialist, who will assess the situation. In some cases, the specialist may request the execution of instrumental tests (x-rays to the spine or, more rarely, magnetic resonance or CT scan).

"If the disorder is only at the beginning, if it is only a kyphotic attitude and not a real kyphosis, one can intervene 'simply' with a motor re-education and appropriate gymnastics”Says Ruosi. “But be careful: for gymnastics to be really useful, the child must transfer to his daily life the attitudes and postures he learns by doing the exercises. In other words, the little patient must try to maintain the correct position of the back as much as possible during the day and not only in the few hours of gymnastics, which otherwise are of little use ".

If the kyphosis worsens and from a simple attitude to an irreversible change in the shape of the vertebrae it is necessary instead with a orthopedic bust. "To be worn for a variable daily time depending on the severity of the deformity" underlines the expert. If the disease worsens, they can move on to using a plaster brace or even, in severe cases, to surgery to correct the spine.

Read also: Sports for children, what is the most suitable activity for your child?

During the meeting in our city, Ruosi defined kyphosis a "social bomb", referring to a significant increase in cases that he observed in his clinic and during some investigations conducted at some elementary schools in Madrid. "Compared to 10 years ago, there are much more boys and girls with kyphosis. To the point that until a few years ago we prescribed one brace for kyphosis for every ten braces for scoliosis, today we have gone to eight braces for kyphosis every ten for scoliosis ”.

The responsibility for the phenomenon would be attributed, according to the orthopedist, due to the increase in hours that children spend leaning forward: no longer just at school desks or on the desk at home, for homework, but also in free time, spent with smartphones and tablets. In use today since very young, just when the column is more subject to important modifications.

How can we avoid children from assuming these positions which are so incorrect and dangerous for the health of their backs? Here are Ruosi's tips.

Football, volleyball, basketball, judo, tennis, athletics: there are many sports that children can start doing after the age of six. Are you undecided about which one to choose for your child? Read ...

add a comment of Kyphosis in children: what it is, how to prevent it, how to intervene