Lactating beer: can it be drunk? 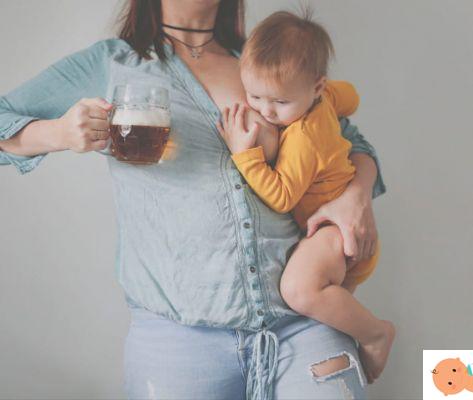 Okay, during pregnancy it is definitely better to avoid alcohol, but does the rule also apply when breastfeeding? And if so, it is true for all alcohol or the beer, as many think, is it an exception? The question is more debated than one might believe, but in the end science has already given a very precise answer ...

Lactating beer: can it be?

As it is rich in mineral salts and generally with a lower alcohol content than wines or various spirits, beer is often considered a "good" alcohol, less harmful to health, so much so that it can be consumed more lightly even during delicate phases such as breastfeeding. Indeed, in recent decades the belief has been fueled by many that dark beer, if drunk during breastfeeding, can increase the production of breast milk.

In reality, however, although science itself has recognized many beneficial properties, beer remains in all respects an alcoholic beverage and therefore it would be much better. avoid it.

Why (also) can beer hurt the baby?

As the Umberto Veronesi Foundation reminds us, theethanol - the ethyl alocl contained in beverages such as beer - and its metabolite acetaldehyde, is given to the baby through milk and this can represent a danger to the baby's health. In fact, if it is shown that the concentration of alcohol present in milk is much lower than that taken by the mother (less than 5-6% of the maternal dose per body weight), it is equally true that repeated intake or timing (eg : breastfeed shortly after drinking) may increase risk factors.

Among the possible side effects of taking beer while breastfeeding are:

Does this mean that drinking a beer while breastfeeding equates to a sentence for our baby? Obviously No., but one must still be careful and consider "drinking" as one cheat one-off (therefore rather rare).

Hydration is essential during the breastfeeding phase. About 85% of the composition of breast milk it is represented by water, therefore it serves reinstatement liquids properly.

It is therefore important to drink at least two liters of water per day. Infusions and herbal teas are also fine, as long as they are not too sugary.

Read also: Breastfeeding: a handbook for the first months

Is it true that drinking beer while breastfeeding increases milk?

This belief is widespread but not only does it appear scientifically unfounded, but actually drinking beer while breastfeeding could have the opposite effect.

But it doesn't stop there. In some cases, in fact, the mother's intake of ethanol can alter oxytocin levels, the hormone that favors the ejection of milk, thus decreasing (and not increasing) the supply of milk available to the baby.

No, this is a false myth. Indeed, it could have the opposite effect.

add a comment of Lactating beer: can it be drunk?