Language delay: what it is and how to intervene 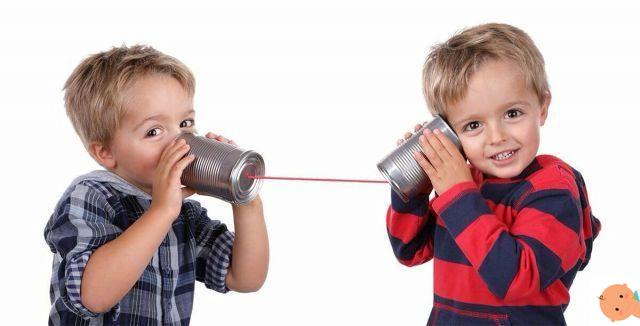 Within a few years of life, the child learns the language to which he is exposed, without the need for someone to explain the rules or formal principles to him, but simply by being immersed in the environment; indeed language is acquired naturally by man through an interaction between the principles of analysis and organization of the nerve centers and linguistic data from the environment. Thanks to this reciprocal influence, the nerve centers are stimulated to a progressive maturation that allows the child to structure rules and knowledge that he can use in his favor to understand and produce language.

Il speech delay it would consist in a difficulty that can be found precisely at the level of these processes, which takes the form of a slowdown in the evolution of the development phases of language itself. According to a study by Desmarais, Silvestre et al. (2008), the prevalence of the so-called “Late talkers”, that is, of late speaking children at 24 months, would consist of about 15% of the population.


Among most common causes of simple speech delay is possible

In recent years, the lack of efficacy of a wait-and-see attitude towards this problem has been evident, given that currently numerous studies demonstrate the indispensability of an early habilitation speech therapy intervention.

What are the characteristics of a delay in speech?

The child is defined "Late talker" when he has a vocabulary of less than 50 words at 24 months, or when he does not enter the combinatorial phase at 30 months, that is, when he does not combine two words to produce a first form of sentence, albeit very simple.


Other characteristics found in these children are one late appearance of the lallation, while the first words can be produced at about 18 months; later, at 2-3 years, the child begins to say a more or less large number of words, ma however, it fails to produce phrasal structures. Therefore only the parents are able to interpret his requests within a routine context.

When to start worrying?

To have a clear idea of ​​when to intervene, the parent should refer to the typical language development, and therefore also to the linguistic performance of peers. Generally


Therefore, if you notice a deviation from these ideal references that may arouse suspicion, it is still advisable to contact a specialist for information.

YOU MAY INTEREST: Stuttering, what to do if the child stutters

What to do and how can a child's speech delay be recovered?

First of all it is advisable that parents, also discussing with the pediatrician, illustrate their own concerns about the delayed linguistic development of your child. Subsequently it is appropriate to carry out one speech therapy evaluation to be able to consider the starting level of your child from a receptive and expressive point of view.

Usually this is possible thanks to the administration of questionnaires to the parents and carrying out a game session to collect a sample of spontaneous language, from which it will be possible to extrapolate a lot of information on the child's picture and carry out, at a later time, a reassessment to estimate his improvements. An accurate assessment thus also allows parents to illustrate the therapeutic proposal more suitable and personalized for that particular child, which will vary according to his or her needs.

MAY OF INTEREST: Language: has trouble saying the R, four advice from the speech therapist

Games or activities to do at home to develop language

Numerous precautions can be adopted on a daily basis to favor the linguistic development of one's child; among these there is:

La collaboration of the family in the speech therapy rehabilitation project to guarantee its success it is in any case essential and it turns out to be as important as the treatment carried out with the therapist, in fact, especially in these cases it is good to implement synergistic cooperation.

About the author Vittoria Fredro


Graduated with honors in Speech Therapy at the University of Perugia with a thesis entitled: "Augmentative and Alternative Communication in the aphasic patient: the role of executive functions", I am currently attending the Master's Degree in Rehabilitation Sciences of the Health Professions at the same university. During my studies I have acquired skills for the evaluation and speech therapy treatment of patients of developmental, adult and geriatric age and currently I practice in the province of Perugia and Terni.

How speech develops in children: 20 things to know ABSOLUTELY

What are the stages in the evolution of language in children? What is the best way to talk to your child? These and other questions were answered by Tiziana Rossetto, president ...

TAG:
Fetal growth retardation: what it is, how to intervene, what are the prospects for the future ❯

add a comment of Language delay: what it is and how to intervene