Language: how do children learn to speak? 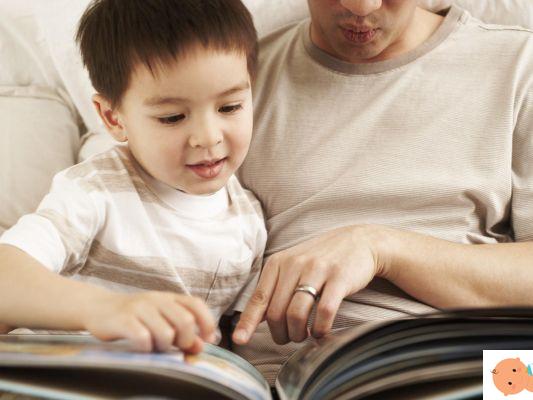 How do you learn to speak? How do children learn their first words? Is it something innate or that, exercise after exercise, syllable after syllable, is stored in the minds of the little ones?

There are different theories about it and mostly they contrast each other two main points of view:

language is innate in man or can it be learned?

As psychologists Freddy Jackson Brown and Nic Hooper explain to the New Scientist, a theory may have given the answer to this question.

Read also: the development of language from 0 to 3 years

Most of the children begin to speak around the age of two and gradually, in the following months, they become better and better and acquire command of language.


But do babies learn by simply listening and learning accordingly or are they born with some particular innate gift that makes them more proficient in their native language? Surely one thing is certain. Children learn the language that surrounds them. If we talk about a child in Del Paeseno, the little one will learn Del Paeseno. But then?

Theory 1 - most human behaviors are learned: even language

Harvard psychologist BF Skinner, a behaviorist, has always argued that most human behaviors are learned. In particular, his studies focused on "operant learning": our actions are conditioned by the consequences. So our behavior would be affected by the context, including punishment and positive reinforcement. An approach that he tried to apply to language as well.


If linguists in fact usually focus on language form and structure (for example grammar and syntax) Skinner was more interested in function: under what circumstances do we speak? And with what effects?

Skinner then came to the conclusion that operant conditioning is a process by which an organism adapts to its surroundings during its life. A bit like natural selection can lead to biological complexity, choosing a behavior can add complexity to one's life. And just as successful behaviors are rewarding for natural selection, so does language too.

Theory 2 - men have an innate ability to speak

A young linguist, Noam Chomsky, however, does not fit in and in 1959 (Skinner's theory dates back to the 40s) he criticized the previous theory and introduced "generativism" (generativity). Practically it is our ability to produce and understand sentences that we have never heard before.

In fact, Chomsky argues that most of the things we say do not come from the surrounding environment. Is that men are born with an innate capacity for language, called "universal grammar". A theory that has dominated the panorama of linguists for many years but which has not completely convinced.

In the 70s and 80s Murray Sidman of Northeastern University in Boston did several experiments with small research groups to understand how we learn to read.

In different experiments he tried to teach children to choose one stimulus over another. For example, when they had the letters DOG in front of them, they were shown a picture of a dog. This is one of the ways most people learn the names of things. And it is important to learn to read.

Sidman noticed something interesting in his studies: Once they had learned the "relationship", children could automatically apply that same system to other categories, without anyone teaching them.

In another experiment he showed the uppercase and lowercase letters of the Greek alphabet (the gamma and the lambda). During these tests, he noticed that the children made relationships between capital and lowercase letters even when he had not taught them: they were able to recognize the uppercase or lowercase gamma letter and vice versa. No one had shown him to me before. A phenomenon called "equivalent stimulus".

This discovery brought curiosity back to the subject.

What we now know is that babies learn to recognize different stimuli and feelings using relationships. For example, when they learn the concept "greater" they are able to apply it between two objects, even if they have never seen them before. That dog is bigger than that cat. That book is bigger than the other. Can generalize. A capacity that is only of man, already from 16 months of life. Both pigeons and chimpanzees were tested to see if they too were able to use this ability. But they are not.

Then another thing is clear: even if generalizing is innate in man, one must learn to do it.

From birth, children are stimulated every day by their parents with different inputs. An example? When you catch a ball and say "ball" to the child, and a little later a picture of a ball is shown. Over time, the child is exposed to many different objects, in disparate contexts and with different people. Only the relationship remains constant. After some training, the child is capable of abstracting this relationship and making it his own. And to understand that there are "smaller, larger, equal, higher" things. With time and practice the stimulus becomes more and more abstract and the little one is able to apply it. Also to concepts.

These researches led to the Relational Frame Theory (RFT), which replaced the theory of the linguist Chomsky.

This theory, the RFT, then describes how we are able to create a rich and symbolic network of relationships between arbitrary stimuli. In other words, language.

To return to the original question: what are the origins of language?

If the RFT is correct, Skinner was right after all. Language is learned, although not exactly as he intended it.

Language is the product of an exquisitely human skill that we learn. We take it for granted, but it is what makes us human.

(this article appeared in the June 7 issue of New Scientist)

add a comment of Language: how do children learn to speak?