Laughter yoga in pregnancy, what it is and what are its benefits 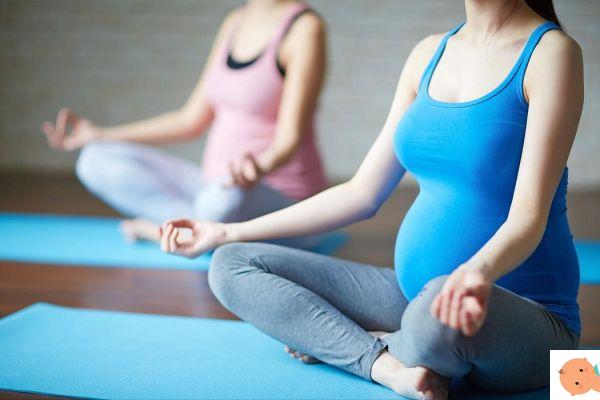 It is enough to laugh 15 minutes a day to regain well-being and serenity. This is the concept behind the yoga of laughter, a technique invented 20 years ago by the Indian doctor Madan Kataria which today is widespread all over the world and also in the country.

«From the fourth month, it can be practiced even in pregnancy»Explains Annalaura Siercovich, Hata Yoga teacher of the Mediterranean Yoga Federation, teacher of yoga in pregnancy and teacher training trained by Laura Toffolo in Laughter Yoga. "The only precaution is not to strain the abdominals too much and then perform a laugh that is a little more quiet and light".

Read also: Yoga in pregnancy: 3 exercises to do at home

Practice is contraindicated only for women who have had abortion threats and who have to stay in bed. «With them you can make a journey of laughter meditation - explains the teacher - which is a very intimate and light type of laugh, but still capable of making the woman breathe better, clearing her mind of thoughts and making her relax ».

Laughter Yoga: How It Works

In normal sessions of yoga of laughter it starts with a warm-up phase in which you are standing and moving in space clapping your hands. Everyone follows their own rhythm, repeating the mantra of laughter: "Oh, oh, ah, ah". From there, they begin a series of playful group exercises, which have the task of stimulating laughter.

At that point it begins to to laugh and it continues for 10 15-minute. Laughter is unleashed, first forced, and then becomes spontaneous and contagious. The session, which usually lasts an hour, ends with a guided relaxation, lying on a mat.

How it works in pregnancy

«The sessions with the pregnant women they are a bit different - the expert underlines -. In my course I start with yoga postures, with breathing exercises and then I start with light laughter and with gods games, but aimed at opening the hips. I then end with the laughter meditation that women can also do during labor ».

Initially the laugh is fake and provoked, but the more you go on the more you laugh naturally. "If in a normal session you can laugh even for 10 minutes, with women waiting you get to 3-4 minutes, otherwise you risk making them shake, while our aim is to make them relax, calm and breathe".

Laughing for no reason brings enormous benefits to the person: both physically and mentally. Those who approach this practice practice laughter as if it were a physical exercise, combining it with pranayama breathing, which involves a longer exhalation than inhalation. And by taking in more oxygen, you become more charged, full of energy and in a good mood.

"All advantages that pregnant women also have: first of all, they learn to breathe correctly using the diaphragm well. A very useful skill, especially towards the last months of pregnancy when breathing becomes difficult ».

Secondly, fgood for mood and energy: "Laughing releases endorphins, so women who have done laughter yoga feel more active, stronger and happier." But even more relax: «It is not uncommon for expectant women to get a good long, tight sleep after a laughter yoga session. Even in the last months of pregnancy, when sleeping becomes difficult ».

It also has reassuring effects regarding the fear of childbirth: «We created the "Laughter of childbirth", a technique to make the most of the diaphragm when pushing. Women who learn it al preparation course they feel calmer in facing labor, because they have an extra weapon to deal with it ".

Lo yoga of laughter it can then be very useful also in after childbirth. «Help new mothers in the delicate moment of facing the new life with the baby. Among other things, it is also very useful for getting into shape».

«If you want to start a path it is good to do it with carefully trained people. My advice is to attend a course with a 'midwife or a 'yoga teacher which are also laughter yoga leader, so that they know what kind of laughter to use with expectant women. '

add a comment of Laughter yoga in pregnancy, what it is and what are its benefits