Lazy eye (or amblyopia) in children: 7 things to know 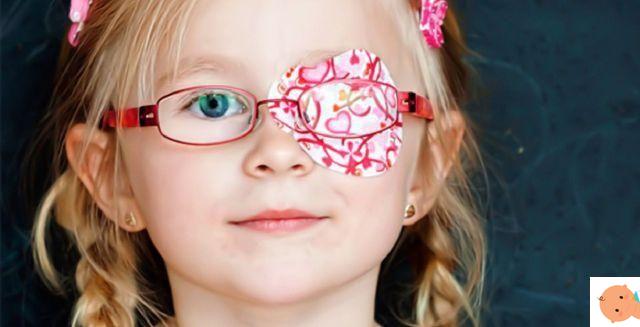 “Also called lazy eye, amblyopia is a condition in which one eye essentially sees less than the other, in terms of visual acuityHe explains Luca Buzzonetti, Head of the Ophthalmology Unit of the Bambin Gesù Children's Hospital in the city.


The problem, however, lies not so much in the eye as in the brain, or rather in the parts of the cerebral cortex responsible for processing the images, which between the two images received by the eyes prefer to "focus" on the best one, neglecting the other, or using it in a limited way.

2. How many children does it affect

Estimating the number of children with lazy eyes is not easy: according to the guidelines on the subject of the American Academy of Ophthalmology, published in 2022, amblyopia affects 0,7-1,9% of children within six months and six years and 1-5,5% of school-age children.

Amblyopia (which is commonly referred to as one eye, but can actually affect both) can be caused by several conditions, and in particular:

4. When can it appear

Amblyopia can occur during the development phase of sight and of the nervous structures responsible for collecting and interpreting images, that is, between birth and 8/9 years of life.

In this period it can be easily corrected: if it is not corrected during childhood, however, it tends to remain definitive.

“Think of the two speakers of a stereo and imagine that one has the volume knob set to 100% and the other locked to 50%,” says Buzzonetti. "There is a useful time interval to intervene on the locked knob and try to move it to 100%: after this period, the knob will tend to stay where it is, so the music will be heard less from that speaker".

In the first years of life it is still possible to intervene by virtue of a certain plasticity of the structures that allow communications in the brain.

There are no obvious symptoms. What can be done is to try to identify the conditions that can cause amblyopia as early as possible.

The first test that goes in this direction is the red reflex test, which is done to the baby in the hospital after birth, or in the first year of life. “It is a very simple test that allows you to check whether the optical pathways are free or not, identifying any diseases such as congenital cataracts” explains Buzzonetti.

Another important examination to identify cases of amblyopia is the test at Lang, which allows you to evaluate the ability to binocular or stereoscopic vision, and is performed during the pediatrician's health checks, typically between 2 and 3 years of life.

The "health balances" from the first month to the 14 years: this is what they consist of

Health balances are a series of checks that the doctor carries out to evaluate the psychophysical development of the child. It is the individual regions (sometimes the individual Asl) that establish exactly ...

“The ideal, however, would be to subject the child around the age of three to one eye examination with assessment of visual acuity, which is the fundamental tool for identifying any vision defects "specifies the specialist.

But how do we go about correcting this problem? “The first thing to do is to intervene on the causes” explains Buzzonetti. Thus, if there is a cataract, surgery will be carried out, while if there is a vision defect (as happens in the vast majority of cases), glasses will be worn to correct it.

Rehabilitating the brain: the bandage

Sometimes, this is enough, but usually it is also necessary to "rehabilitate" the brain to take into account the images that come from the "lazy" eye. The tool to do this is the classic bandage, that is the occlusion of the "healthy" eye with a bandage, so that the brain is forced to deal with the "worst" images it receives from the other eye.

Once the bandage was "imposed" for the whole day, while today it is proposed for a more limited period of time, from a couple of hours to 5/6 hours. "It depends on the starting conditions: the age of the child, how important the visual defect is, and so on" clarifies the specialist, underlining that in any case it is an operation to be maintained in general for a few years. "Otherwise the risk is to go back and lose the recovery that has been made".

The best time to wear the bandage? "School hours, when the eye is actually busy" advises Buzzonetti. But other moments during the day are also good, as long as they include eye activity: “When the child watches TV, draws, plays with constructions”.

As a bandage system, the Baby Jesus specialist recommends the classic patch that is applied directly to the eye (today there are colorful and fun variants), while it advises against - in accordance with American guidelines - those to be applied on the lens. “The children, however, look up or down, making the occlusion nullify”. For the same reason he is critical of lenses with special filters. The American guidelines report only one study that would have shown its efficacy as a primary treatment of moderate amblyopia, while it would seem more useful as maintenance therapy, once positive results have been obtained with the classic bandage.

Of course, not all children like to walk around with a "waxed" eye. But according to Buzzonetti the problem is more than the parents: “Some live this situation with great difficulty, transmitting anxiety and rejection to their children. Others understand its usefulness and find a way to persuade their children to follow therapy ”.

Another possibility is represented by drug therapy based on drops of atropine which are always instilled into the healthy eye to slightly blur vision. This too has shown good efficacy, but it may have some collateral effect more than bandaging (from sensitivity to light to more general effects such as tachycardia). For this it must be followed very carefully.

Other strategies are for now considered only experimental.

TAG:
"Offline is beautiful": advice to parents to detoxify from technologies ❯

add a comment of Lazy eye (or amblyopia) in children: 7 things to know