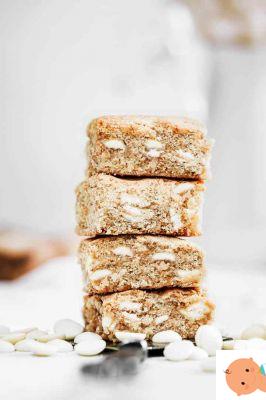 Brownies are among the most popular American treats. It is a low, moist and chocolaty cake that is cut into squares. The name, which means "brown", refers to the cocoa or chocolate used in the dough. A little less known, but just as good and greedy, are the blondies, or the “biondini”, the light version of these squares of cake, prepared with White chocolate.

In addition to traditional recipe, we explain how prepare them with your children in version vegan, with pistachios or pumpkin. Blondies, as well as brownies, are easy to make and lend themselves to being frozen already portioned, to have a snack always at hand.

Blondies: the cousins ​​of the brownies

The basic recipe provides lots of white chocolate and lots of dried fruit. In this preparation, taken from the blog La Cucina di Asi, a mix of different types is expected, but, ideally, the noci macadamia with their buttery flavor they are the ones that go best with white chocolate.

Chop the white chocolate, melt it with the butter and let it cool. In the meantime, have the children weigh, if they are old enough, all the other ingredients and have them put the flour, sugar, baking powder and salt in a bowl. Also ask the children to mix all these ingredients carefully.

Open the eggs in a saucer and add them to the melted chocolate, which should now no longer be hot. Once you have obtained a lump-free mixture, the children will have to add the dry ingredients previously mixed to the mix of eggs and melted chocolate, gradually pouring it into the bowl.

Grease and flour a square pan and tell the children to pour the mixture into it. Finish by spreading the dried fruit to the little ones on the surface of the blondies (it is allowed to steal a few pieces) and bake for about 30-35 minutes in a preheated oven at 180 degrees.

On the Runlovers blog we found this version for sportsi, but it will also be fine for children, as you know, they need energy to run, grow and play. The recipe is suitable for all those children who are intolerant to eggs or dairy products or whose parents follow avegan food and uses dark chocolate instead of white.

First, prepare and weigh all the ingredients. Depending on the age of the children, you can also have them do it. From here on, the little ones can do everything, alone or with your help: Sift the flour into a bowl and add the coconut flour, baking powder, cinnamon or vanilla and salt. Mix the dry ingredients and then gradually add the liquids, then the coconut milk and oil. Finally, mix and add the sugar as well, stirring until a homogeneous mixture is obtained. Finish by adding the chocolate to the mixture.

Carefully grease a mold and tell the children to pour the dough into it. Bake for 20 minutes at 190 degrees, remove from the oven and allow to cool before cutting the cake into squares.

Macadamia nuts, those used frequently in American blondies, are not very common and used in the cuisine of Del Paesena. The blogger and pastry chef Mentecontorta replaces them with i pistachios with they create a nice play of color with the white of these cupcakes.

Children will be able to mix and add ingredients to the bowl, while adults will have to deal with knives and stoves, to chop and melt the chocolate.

Preheat the oven to 180 degrees, chop the chocolate and melt it in a double boiler with the butter. Let it cool and add one egg at a time, incorporating the next one only when the previous one has been well blended with the dough. If it is the children who break the eggs and they are still small, have them open them in a separate saucer, in order to avoid the risk that a piece of shell falls into the mixture. Now add the sugar, flour, baking powder and coarsely chopped pistachios and mix to obtain a thick, lump-free batter. Line a 20x20 cm square pan on each side and bake for 20 minutes at 180 degrees. Remove from the oven, let it cool and cut into squares.

La pumpkin, already sweet on its own, it is also perfect in desserts. In these blondies gluten free helps to give moisture and softness. The original recipe, from the Moretto's Chefs blog, includes dark chocolate, but also white chocolate goes perfectly with pumpkin, indeed, it will make blondies even sweeter.

Have the children mix the flours with the cinnamon, sugar, salt, chocolate (which you grownups will have chopped) and baking soda. Also add the egg and pumpkin pulp and mix the dough for the children. While the children continue to turn, pour the almond milk gradually in the mixture: the amount will depend on the humidity of your pumpkin.

Once you have a thick and homogeneous dough, line a 20 cm square pan with parchment paper and cook for 20-25 minutes at 180 degrees in a preheated oven. Cut into squares, after having allowed the cake to cool.

Blondies, variants of the original recipe

Starting from the basic or vegan recipe, you can enrich the blondies with many other ingredients: if you prefer sweet and fruity flavors, add chunks of pear, berries or strawberries to the dough. For a super greedy variant use the colored sprinkles or chocolate candies, covered with colored sugar glaze. If you want to surprise the children with a super-American treat variegate them with caramel and peanuts or with del peanut butter. If it is customary to serve warm brownies with a scoop of cream ice cream, in this case do the opposite: lukewarm blondies and chocolate ice cream.

TAG:
Taking charge of pregnancy, what it is and when to do it ❯

Recipes with citrus fruits to fill up on vitamin C.

How to prepare HEALTHY sandwiches, for the children's summer lunch

How to make chocolate at home

add a comment of Let's prepare the blondies, the light cousins ​​of white chocolate brownies