Linarolo: a mayor of Pavia closes schools and launches an appeal to parents 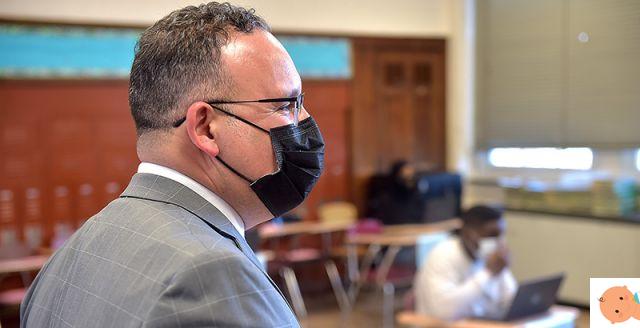 "The Covid cases were in four or five different classes and so I signed the order for closure." So says Paolo Fraschini, mayor of Linarolo, in the Pavia area, that he has decided to close elementary and middle school. There were too many positive cases in the classroom and he was forced to sign the order. "In a few days we found ourselves with 64 children in quarantine, even if at school we are very careful and we adopt very strict rules to protect students - underlines Chiara Fossati, the teacher who plays the role of Covid referent for the comprehensive school of Belgioioso, which includes Linarolo - We cannot expect children to fully understand the situation in which we find ourselves, therefore the contribution of the families. It is not wrong in itself to allow them to go out, but they must understand that if they do not respect the rules they put themselves and others at risk. "

Linarolo closes schools as a precaution

In recent days, an increase in cases has also been recorded in Mede and Casorate, therefore only distance learning for elementary and middle school pupils. For now, the Linarolo schools will be closed until 8 March.

"I ask parents to also check the outings and what their children do in the afternoon. I understand that it may not be easy, but it is certainly important for everyone's health "writes the mayor of Linarolo." Taking such a decision is always difficult, because I know how much inconvenience the closure of the school entails for families. So all the more reason I do not want this measure to be thwarted by irresponsible attitudes. I was a boy too and I understand the social deso of young people, but touring the country in groups of 10 or 15 people without masks and distancing is dangerous for everyone ".

Lombardy in the orange zone

We have all seen the video of the boys intent on dancing and chatting in the Darsena, in our city. Thanks to the beautiful days of the weekend and the return to the orange area of ​​Lombardy, the young people flocked to the streets to be able to be together. But this is not the time to let your guard down. The numbers are rising, the positivity index too. In particular the English variant it would already cause more than half of the cases, according to the latest data collected by the Regions and processed by the Higher Institute of Health. And so schools close in over 250 municipalities and 8 provinces turn dark orange. From Wednesday, the provision will cover the whole of Como, the citizens of Viadana, Pomponesco, Gazzuolo, Commessaggio, Dosolo, Suzzara, Gonzaga, Pegognaga, Moglia, Quistello, San Giacomo delle Segnate, San Benedetto Po, Asola, Castelgoffredo, Casaloldo, Medole, Casalmoro , Castiglione delle Stiviere in the province of Mantua; Spinadesco, Castelverde, Pozzaglio ed Uniti, Corte dei Frati, Corte de 'Cortesi with Cignone, Spineda, Bordolano and Olmeneta in the province of Cremona (including the capital); Casorate Primo, Trovo, Trivolzio, Rognano, Giussago, Zeccone, Siziano, Battuda, Bereguardo, Borgarello, Zerbolò, Vidigulfo (in the Pavese). The squeeze does not spare the of the city. Involved Motta Visconti, Besate, Binasco, Truccazzano, Melzo, Liscate, Pozzuolo Martesana, Vignate, Rodano, Casarile. Bollate, Viggiù (Varese) and Mede (Pavia) from reds "fade" to dark orange. To these realities are added the province of Brescia, eight municipalities of Bergamo and Soncino (Cremona) for which the strengthened orange taken last week is extended by seven days. So schools closed with the exception of crèches and the ban on reaching second homes.

Walter Bergamaschi, director general of the Ats of our city, spoke about it on Sky Tg24: "The situation, especially inside schools, is worrying, where we have the 33 percent of cases on the rise in one week". In the week from 15 to 22 February, the 15-19 age group has the highest incidence of infections. There are 181 of them for every hundred thousand inhabitants, compared to 138 in the previous seven days. Another graph shows that the share of under 18 infected with the virus is on the rise, while that of over 65 is stabilizing.

add a comment of Linarolo: a mayor of Pavia closes schools and launches an appeal to parents