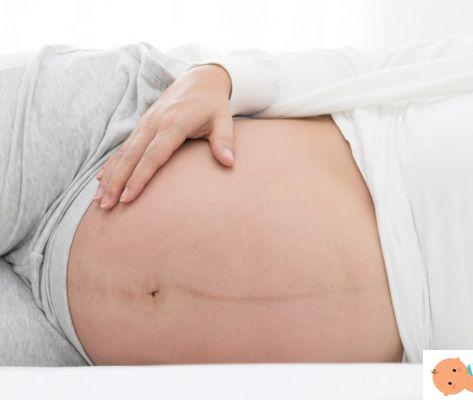 What is the linea alba

La linea alba (also called linea nigra) is about half to one centimeter wide and is a darker strip of skin that many women may see appear in the second trimester of pregnancy. "To cause it are the hormones of pregnancy, in particular estrogen, which determine a increased production of melanin in certain areas of the face and body, such as cheeks, sides of the nose, upper lip and forehead (the so-called chloasma gravidico or pregnancy mask) or around the areolae "explains Beatrice Tassis, gynecologist at the Obstetric and Gynecological Clinic in our city .

When to compare and when to go

The linea alba appears around the second trimester of pregnancy, around the twenty-second week of gestation, even if there is no precise rule. It is not possible to predict when it will appear and if it will appear.

Why it comes and to whom it comes

The linea nigra does not appear to all women, but they are predisposed those who have a dark complexion, because due to their genetic characteristics they have a greater production of melanin.

Here are some pictures of the linea nigra (or linea alba), a darker skin line that can form during pregnancy on the belly between the pubis and the navel.

What to do when the dawn line appears? "Nothing, because 2-3 months after giving birth, the linea alba disappears by itself, without the need for creams or other treatments" concludes the gynecologist.

Read also: how to cope with 40 days after giving birth

TAG:
The influence of the season ❯

add a comment of Linea alba or linea nigra in pregnancy