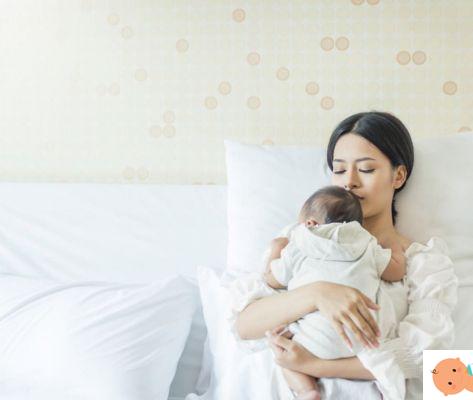 After birth, both natural and caesarean, it is normal to have blood losses of varying degrees, which are mainly used to eliminate all the tissues and blood that were used during pregnancy from the uterus. These losses are called lochiazioni and are one of the most frequent and known manifestations of what is happening in the woman's body in the so-called puerperium, that period of about 40 days following the birth.

As we said the lootations are vaginal discharge completely normal: they are used to expel fragments of decidua from the uterus, that is, fragments of endometrial mucosa, and tissues and blood residues of pregnancy.

Il spot color changes from week to week: at the beginning it is strong red, and their consistency is rather liquid and abundant. After a few days the color becomes more dark brown and the losses are less abundant.
In the second week, the patches will be yellowish and creamier. Eventually they turn white.

Be careful not to confuse the lochia with the head of the parcel, that is, the first menstruation which occurs after childbirth and which actually marks the return of physiological ovulation. The foreman won't be back until three or four months and in some women, menstruation may resume even after many months, especially if they are breastfeeding.

How long they last?

Lootations last between 3 and 6 weeks, but they change over the course of the days.

What if they end after a week?

Lootations change in both color and texture. It is completely normal to have fairly large bright red discharge in the first few days after giving birth. And it is also normal to notice a stop of leaks one week after delivery, when the lootations become very scarce and light in color. Around tenth day it frequently happens that the losses turn red again and then change again after a couple of days.

What if they are too short?

Lochings are unlikely to stop suddenly: they certainly change color, passing from the bright red of the first days to a light yellow and then white. It is normal for them to become red again with brief spotting.

Il bleeding it is more intense in the first days after the birth of the child: it is important to call a doctor if you notice that the losses are always very abundant and do not seem to decrease.

Let's see what to expect from lochiazioni and when to worry because something is wrong.

Normally, post-partum losses do not have a bad smell, so if you notice that the lootations are bad smelling, it is good to contact your doctor and talk to him: it could be triggered an infection or a fungal infection.

After the first few days after giving birth, the losses will no longer have that bright red color, but they will tend to become more and more faded until they are yellow. And it will also be normal that, after a few days, they may return to being slightly more abundant and red in color.

What to do if lootations come and go?

After about ten days, the losses decrease sharply until they almost disappear, but it is normal for them to start again and for spotting to occur up to 6 weeks after delivery.

Postpartum hemorrhage affects up to 5% of women. It is most likely to happen in the first 24 hours after giving birth but can occur anytime within the first 12 weeks after the baby is born. This is a serious complication, which can cause a sharp drop in blood pressure.

The signs not to be underestimated is that require immediate medical attention I'm:

Depression in pregnancy and postpartum, it is possible to overcome them

How to save the couple after the birth of a child

The body after childbirth: 11 good reasons to accept it as it is

add a comment of Lochiations: how long they last and when to worry