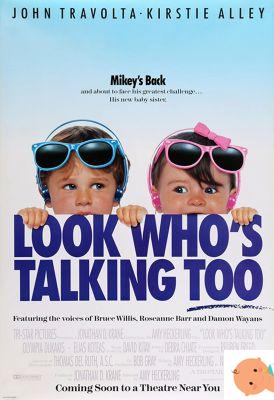 Babies communicate with their parents even when they cannot speak yet. They make their needs understood by making sounds. This is said by Joachim Bensel, a well-known behavioral biologist in Germany, who explains the different sounds of children and their meaning.

She says babies talk to us. What does it mean? Babies communicate from birth with their parents, otherwise they could not survive. They use non-linguistic means of communication to tell us that they are hungry, need affection, or tired.

What are these non-linguistic means? Babies express themselves with body language and make sounds. We distinguish five different sounds: the sound of contact, sleep, drink, satisfaction and bad mood.


How do parents decipher these sounds? The contact sound is a single, short sound, lasting more or less a tenth of a second. Parents feel this especially often after the child wakes up. It means: "Is someone there?". The parents' best reaction is to go to the child and talk to him. Subsequently, the feeling of being abandoned emerges, but not at first.

Most parents act the right way by instinct and this is good. If they thought about it, they would not react promptly and the child would feel left alone. At night, sometimes the parents' reaction is delayed, because they themselves sleep and do not immediately hear the baby. Then the baby starts crying ... he has no other choice. Gives stronger signals to get a response.

So is it better to sleep in the same bedroom? In the first year of life I think it is positive. Alternatively, you can leave the doors open or stay in contact with the child with an intercom. However, babies make sounds constantly even when they sleep. Parents don't always have to react immediately every time.

You speak of typical sleep sounds. How do they recognize each other? Sleep sounds are pleasant, longer than the sound of contact, and are mostly heard when the baby changes position.


Why are these sounds positive? Translated they mean something like: "It's okay. Don't worry." If the parents don't hear the usual sleep sound a couple of times, they wake up and check if the baby is okay. Nature has foreseen this.

Do babies who make sounds in their sleep want an answer? Not necessarily. Parents who hear their baby's sleep sounds automatically respond without being truly awake. From time to time in a semi-awake state they emit a pleasant hum.

Infants produce the so-called drinking sound. Because? This sound accompanies breast or bottle feeding. After each sip, the baby makes this sound following the rhythm of the feed, about once every second. She looks very happy and signals to her mother that the milk is coming in the right amount.

What happens when they don't make this sound? The nursing mother will change breast or position. A bottle-feeding mother will likely check if the teat is clogged.

The sound of bad mood

What sound should parents react to quickly? At the so-called sound of bad mood, a series of short single sounds (up to 14 per minute). This sound precedes the moans and screams that are emitted if parents do not react promptly. It repeats rhythmically and signals that there is something wrong, it could be due to the fact that the bottle was removed too soon and the child is still hungry, that he cannot hold himself on his arms and is therefore frustrated or that it has been done getting into the bathtub too quickly. With the sound of bad mood the child tries to change his environment.


Can parents always prevent their child from feeling uncomfortable? No. The example of vaccination: the little one will express his resentment and at the same time will learn that some unpleasant situations cannot be avoided. Parents can, however, calm their children down and tell them that it is already over. Then the child feels considered.

Is it necessary to prevent children from screaming? In many cases, parents can avoid screaming. But not always, as there are very sensitive and difficult to please children, who often cry. In this case, even the most attentive parents can do little; you just need a lot of patience.

What allows parents to interpret different sounds more easily and correctly? Much is evident from the context: how long has the child not been drinking? Did he sleep badly during the night? Is the diaper dirty? Body language can also provide a lot of information, for example if the child rubs his eyes it means that he is tired. If he sucks his thumb he is hungry. But as already said: the best thing is to follow your instincts. The more silence there is, the better. It is also important to have faith in your abilities as a mother or father.

(Joachim Bensel works as a behavioral biologist at the Human Behavioral Biology Research Group in Kandern, near Freiburg)

Do you want to compare yourself with other mothers? Enter the forum dedicated to babies from 0 to 12 months