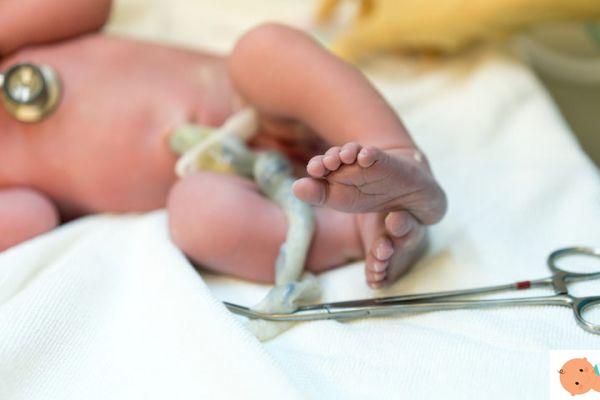 LOTUS BIRTH WHAT IT IS

Lotus Birth is one delivery method which does not involve cutting the umbilical cord after the baby is born. In this way, the placenta and fetal appendages remain attached to the newborn even after the afterbirth, that is the moment when the placenta is expelled from the uterus.

Generally, the cord and placenta detach from the baby in a natural way only after a few days - from three to ten - from birth. In the meantime, the placenta is stored in a bag or in a basin, close to the baby, and sometimes it is sprinkled with coarse salt (to favor its drying) and with a few drops of perfumed oil to mask the bad smell.


In the case of mini Lotus Birthinstead, the cord will be cut within 12 hours of birth.

Carried out for the first time in 1974 by the nurse from whom this practice takes its name, Lotus Birth has also begun to spread in Del Paese and some mothers have also begun to request it in the hospital.

LOTUS BIRTH WHY IT IS DONE

According to what we read on the site of the association Lotus Birth® -Del Paese, the motivation that would lead to want this practice would be that "the prolonged contact with the placenta would allow the child to receive all the quantity of the precious placental blood that is present. at birth and that nature has provided for the constitution of the immune system ".


Furthermore, for supporters this technique would be "the sweetest, most sensitive and respectful way to enter life".

Read also: Sweet childbirth, what it is and how it works

If it is true that today, in accordance with the recommendations of the World Health Organization, the Del Paesene recommendations on the cutting of the umbilical cord, signed in 2022 by various scientific societies, also invite cut the cord three minutes after birth, and not before a minute (barring particular emergencies), it is equally true that the practice of Lotus Birth is instead not recommended by various groups of experts.

Contrary positions have been expressed for example by the Del Paesena Society of Neonatology, as well as by the Royal College of Obstetricians and Gynecologists and by the American College of Obstetricians and Gynecologists. The reason for so much opposition? The concern that the practice may constitute a vehicle of potentially very dangerous infections for the newborn, in the face of the lack of scientific evidence demonstrating its real advantage for the mother and baby.

To ensure adequate supplies of iron and stem cells to the newborn, in fact, according to the available scientific literature, the “delayed” cut at three minutes is more than sufficient. Leaving the placenta on for longer, even for days, could expose the baby to dangerous infections.

Read also: Cutting the umbilical cord: when to do it

This is evidenced by some scientific articles that report clinical cases of infants who suffered serious infections - from hepatitis to sepsis to heart infection - after a Lotus Birth birth.

And a very recent article published in Nature showed that 5% of the placentas of a sample of over 570 pregnant women had contamination with group B streptococcus, a pathogen that can cause sepsis in newborns.

Furthermore, according to the Del Paesena Society of Neonatology, the practice also poses particular problems from a legal point of view. “In our country, the ministerial guidelines on childbirth do not contemplate this procedure, as such is not recognized at national level. In the event of negative consequences for mother and child, a legal problem could be created for the structure and the doctor who decide to implement it ".

It is no coincidence that some important Del Paeseni hospitals, to which the request to carry out this procedure had been forwarded, did not practice it because "it does not allow compliance with the health and hygiene regulations in force and because the infectious risk is real". Furthermore, the SIN reminds that the placenta cannot be taken out of the hospital as a special waste which, as such, must be disposed of in accordance with current legislation.

Even the possible signing of the informed consent by the parents, according to the legal opinion commissioned by the SIN to the Granata studio of our city, "could be deemed unsuitable to cancel the responsibility of the treating physician and of the structure due to a hypothetical judgment that could arise as a result of damage to the newborn ".

If this procedure were carried out, perhaps in the case of a home birth (which is however not recommended by SIN), doctors recommend careful monitoring of the newborn "to identify early clinical signs of a possible infection".

add a comment of Lotus birth: the possible risks of childbirth without cutting the umbilical cord