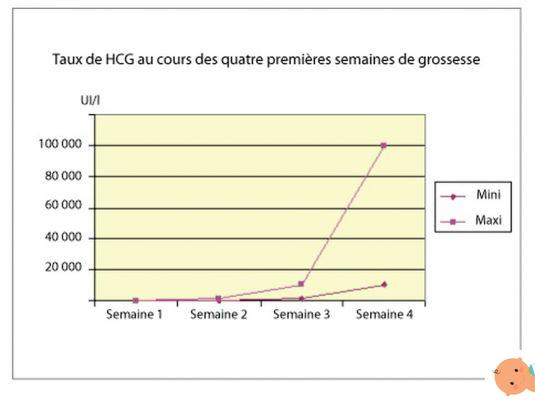 One of the most important hormones in pregnant women is Beta hCG - Human Chorionic Gonadotropin and it is this hormone that determines the positivity of pregnancy test. If the value of this hormone increases daily, the pregnancy goes well.

Depending on the dosage value of the Beta hCG, you can understand to that week of pregnancy we find ourselves and if everything is going well.
Let's try to understand when the values ​​of this hormone are high or low and why.

Watch the video with the explanations on Beta-hCG:

Considering that in the vast majority of cases it is not necessary to carry out a dosage of beta-hCG in the blood, we propose below one table to interpret beta-hCG values which you can find on your blood tests.
As you can see, the range of possible values ​​of beta-hCG from week to week it is very large, and it is precisely for this reason that today this data is considered of little use in the precise dating of a pregnancy.

Is the pregnancy test positive? When? What if the line is light? It may happen that the reading is not as simple as one would expect. On the display they should ...

Beta-hCG: when the values ​​are low

If a woman is not pregnant, the values ​​of the beta-hCG in the blood are typically less than 5 milliunits per milliliter.
When a pregnancy is in progress, the beta-hCG values ​​are above 5mlU / ml.

But what does it mean that the values ​​obtained are lower than those expected for the week of pregnancy in question, according to the reference table?

Lower than normal beta-hCG values they can mean:

Warning! Before you worry, consider the wide range of reference values ​​- sometimes the values ​​that may seem low are not really.

Beta-hCG: when the values ​​are high

If the values ​​of the beta-hCG obtained are higher than those expected for the current week of pregnancy, what can this mean?

Higher than normal beta-hCG values they can mean:

Warning! Before you worry, consider the wide range of reference values ​​- values ​​that may seem low at times really aren't.

Beta-hCG dosage in the blood: when you really need it

The blood test to detect beta-hCG remains useful in some circumstances and that is when the first ultrasound is doubtful, or because nothing is seen, or because what is seen does not correspond to what is expected.
For example, you see an ovarian chamber but you don't see the embryo.
This can occur in three cases:

Un very high value of Beta-hCG it can be an index of one twin pregnancy, but this value alone is not enough to be sure: also in this case an ultrasound is needed.

Hormone control Beta-hCG it is not very indicative to understand if the pregnancy is twins, because its dosage is not precisely linked to the number of fetuses.

A particularly high value of this hormone can in fact be caused by many factors, not only by the presence of multiple embryos in the uterus.

What is Beta hCG?

Beta-hCG is a fraction of a hormone, chorionic gonadotropin, which is produced by a first sketch of the placenta starting from the moment the embryo nestles in the uterus.

How Much Does The Beta HCG Value Have To Be To Be Pregnant?

Normally, beta hCG values ​​fluctuate between 0-5 mlU / ml of blood. Values ​​higher than the reference ones indicate an ongoing pregnancy.

When do the Beta HCG values ​​decrease?

Beta hCG values ​​continue to increase throughout the first trimester, peaking around the tenth week after the last menstruation. From that point on, they begin to decrease.

add a comment of Low and high Beta-hCG values