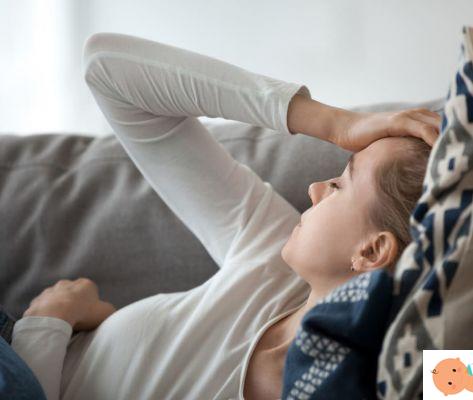 In the first 20-24 weeks of pregnancy, blood pressure tends physiologically to drop, and then starts to increase again until it settles on the values ​​it had before pregnancy. It is no coincidence that until a few decades ago women - who did not have pregnancy tests or ultrasound scans available to find out early on whether they were pregnant or not - took weakness and fainting as signs of a pregnancy in progress.

Because the pressure in pregnancy is lowered

"The pressure drop is related to the placental flow, which acts as a 'discharge valve': that is, there is a rapid passage of blood between arteries and uterine veins, and this determines a lowering, even drastic, of all systemic pressure "explains Professor Sergio Ferrazzani, gynecologist at the Gemelli Polyclinic in the city ".

What to do if you feel faint

"The majority of women are not affected in any way by the lowering of blood pressure typical of the first months of pregnancy," says Ferrazzani.

Only in some cases can hypotension cause more evident discomfort, including:

"To avoid fainting, just lie down in a cool place, with your legs slightly raised above your head, to get the blood flowing quickly to your brain. If your mother wishes, you can have a coffee, which has a slight hypertensive action."

Read also: What to drink during pregnancy: all drinks allowed and prohibited

How to prevent pressure drops

There are some precautions to avoid sudden drops in pressure and therefore prevent fainting. Here are Ferrazzani's indications:

"Except in very special cases, which the doctor will identify, it is not necessary to take drugs to raise the pressure".

If the pressure remains low even in the third quarter

In the third quarter the pressure generally settles down. Only in some cases can it happen to feel a drop in pressure, especially if the mother lies on her back. The cause is the weight of the belly which, in that position, can compress the inferior vena cava, hindering the venous return. To avoid the inconvenience, just get on lying on the left side.

TAG:
The first library, the first books to give to a newborn ❯

add a comment of Low blood pressure in pregnancy