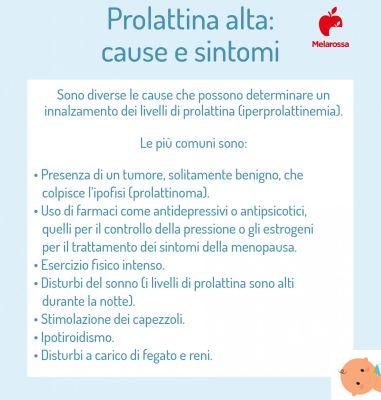 Prolactin: What Happens When It's Low?

La prolactin is a hormone secreted bypituitary gland anterior which, during puberty, contributes, together with estrogen, to the development of the mammary gland. Furthermore, the prolactin influences the breast milk production. A secretion of prolactin below the norm during thenursing tends to significantly reduce the production of milk by the mammary glands.

Let's see everything there is to know about the causes, symptoms but above all about the consequences of low prolactin.

La prolactin is a hormone produced bypituitary gland, a gland located at the base of the brain, associated mainly withnursing. It is prolactin that spontaneously "kicks off" milk production after childbirth and continues to produce it under the stimulation of the baby's sucking.
It also performs other functions in the body: it is important in the reproductive and metabolic sphere, in the regulation of fluids (osmoregulation), and in the regulation of the immune system (immunoregulation).

Prolactin: how is it regulated?

One of the main regulators of prolactin production is the hormone called dopamine, which is produced byhypothalamus, the part of the brain directly above the pituitary gland. Dopamine limits the production of prolactin, so the more dopamine there is, the less prolactin is released. Prolactin itself increases dopamine secretion, so this creates a feedback loop between the two.

Estrogen is another key regulator of prolactin and has been shown to increase the production and secretion of the latter by the pituitary gland. Studies have shown small increases in prolactin in women's bloodstream during the stages of their reproductive cycle where estrogen levels are at their highest. This also happens during and after pregnancy, as a higher level of circulating prolactin is needed to initiatenursing.

In addition to dopamine and estrogen, a variety of other hormones can increase and decrease the amount of prolactin released in the body, with some examples being the release hormone. thyrotropin, oxytocin and antidiuretic hormone.

Read also: High prolactin, how to cure it

What if i have too little prolactin?

The condition of having one insufficient amount of prolactin circulating in the blood is called hypoprolattinemia. This condition is very rare and can occur in people with pituitary hypoactivity.

A decrease in the amount of prolactin secreted can lead to insufficient milk production after delivery. Most people with low prolactin levels have no specific medical problems, although preliminary evidence suggests they may have a reduced immune response to some infections.

I symptoms of low prolactin they can be varied and are not always immediately related to this hormone. However thealteration of the prolactin production generally occurs in these cases:

These are usually the so-called symptoms that prompt the doctor to further investigate this aspect.

Very often among the main causes that provoke one decrease in prolactin there are some categories of drugs such as i dopamine, but also certain diseases can affect prolactin, as in the case of bulimia and tumors and alterations of the pituitary gland. Stress, anxiety, or heavy physical activity can also contribute.

I normal prolactin values, at least for women, they are around 9-25 ng / ml, although during pregnancy they tend to increase up to 150-200 ng / ml. In the event that already during gestation lower prolactin values ​​than the standards are found, the gynecologist will give you indications on what to do. Although this problem is usually treated with estrogen, reserpine, sulpiride, ranitine and ranitine, your doctor will give you the appropriate information.

You and your hormones: Prolactin

add a comment of Low prolactin: causes and symptoms