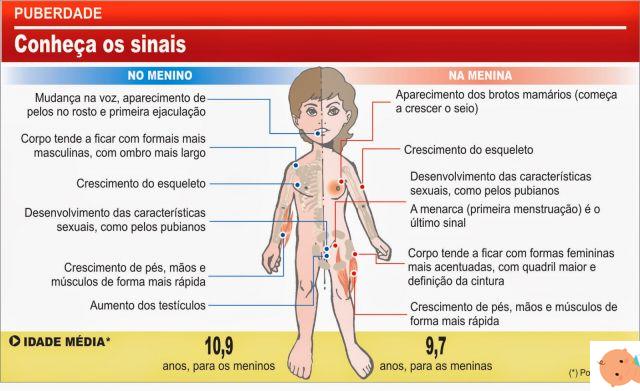 Let's enjoy the innocent smiles and melodious voices of our children, because within a few years puberty it will descend on our little children with big black wings and transform them into completely different creatures!

Seriously speaking, puberty represents a very special time in the life of a young man and a young woman. In fact, it not only implies the completion of sexual maturation adolescent, but defines the physical traits e psychological that will accompany him for years to come.

How does puberty manifest itself?

Of course every boy / girl presents unique features, but despite the wide range of case histories, puberty has some standard changes that apply to everyone.

Puberty begins when the first ones are triggered hormonal changes which considerably change the physique of young people and the affected age can fluctuate between 10-14 years for males and among the 11/12 years for females.

in Girls the first obvious change concerns the breast, which begins with the development of the breast button and dell 'areola.

During these months, future women may experience pain and discomfort.

in boys instead the first sign of puberty is given by the enlargement of one's genitals. They usually develop earlier the testicles and then - sometimes even a year later - the penis. Very common nocturnal ejaculations (but also diurnal, if the member is erect).

Both boys and girls are also starting to see one pop up thicker down underarms and around intimate areas. Obviously this change is in males much more pronounced and it also concerns the face (first beard hair).

Read also: Puberty: what to do with the "crystal bone" risk

A phase of transformation

Among the musts ofadolescence, the first place certainly goes toacne, which in different forms and intensities affects all these young people in great hormonal turmoil.

During this "physiological step", the best thing would be keep the skin very clean and hydrated to stem the numerous outbreaks, but in some cases it is necessary to consult the opinion of a doctor to prevent acne from turning into a problem.

Girls and boys then begin to increase in stature. Females normally start at grow first of males, although the latter, on average, gain more centimeters throughout the entire pubertal cycle.

20 books to recommend to your teenagers

There are not only school books, right? If your teen is looking for some evening reading, take a trip to the bookstore together. To help you choose, we have ...

The Adam's apple and the voice

But tonnage is not the only noticeable change. In boys, for example, the voice changes completely, becoming deeper due to the "blows" of testosterone. Also check the pommel d'adamo.

The menstrual cycle, the menarche

L'arrival of the first menstrual cycle, which generally shouldn't to wait beyond the sixteenth year of age, usually marks the end of female puberty, while the boundary is less marked in males.

When is puberty not progressing as it should?

There are a few specific cases in which it is necessary to monitor the situation and consult the doctor:

TAG:
Precocious puberty: what it is and what it entails ❯

add a comment of Male and female puberty: phases and signs