Male or female? The Chinese calendar method in pregnancy 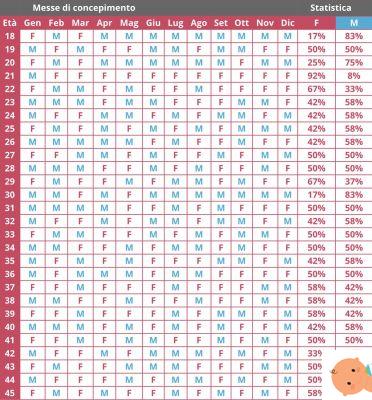 Boy or girl? If the first thought about discovering the positive pregnancy test is about the health of the baby that is growing in the belly, the second ... is about sex. Pink bow or blue bow? Myths about ways to know are die hard and, at times, even fanciful. One of the most "ancient" is the Chinese calendar in pregnancy, a scroll discovered in a Chinese royal family tomb 700 years ago. The parchment is currently kept at the Beijing Institute of Sciences e it should predict the sex of the unborn child based on the month of conception according to Chinese lunar calendar and at the age of the pregnant woman. Find out how the method works Chinese pregnancy calendar.

Read also: Will it be male or female? From science to popular beliefs

How to know the sex of the unborn child

You found out you are expecting a baby and there are many questions you ask yourself. After the initial fears for this happy event, you will surely ask yourself: it will be male or female? This is the most intriguing aspect of all expectant mothers.

Let's see together an easy and fun tool to discover, based on simple data, the sex of the unborn child: the Chinese pregnancy calendar. Obviously the ways to find out with certainty the sex of the child are amniocentesis, the fetal dna test or the morphological.

There is no scientific basis and it is not a reliable tool.

The Country Committee for the Control of Claims on Pseudosciences, clearly states that there is no scientific evidence that proves the reliability of this tool.

With the Chinese pregnancy calendar, however, you can have fun and try to guess.

How the Chinese calendar method works

To know the sex of the unborn child based on the Chinese calendar method, look at the following table and cross two data: the month in which you have conceived your baby and your age at the moment of conception.

The table is composed as follows: a first column on the left indicates the age, while the first row at the top expresses the months of the year.
The column on the far left is dedicated to the percentages that indicate the more or less high possibility that the child is male or female.

Finally, at the bottom, there is a row also composed of percentages that indicate the probability of having one girl or boy based on the month of conception.

Of course, take the result with philosophy!

The odds of having a boy or a girl

There are many ways to know, even before doing the defined ultrasound, if the baby you are expecting will be male or female. There are some extravagant methods and among them there is certainly the Chinese pregnancy calendar.

According to the table found in China, if you hope it is blue bow, the probability increases in the month of July, when the woman is 18, 20, 30 or 42 years old.

If, on the other hand, you strongly hope for the pink ribbon, you have the greatest possibilities at 21, 22 or 29 years and in particular in the month of April.

It's really true: a pregnant woman during the nine months that separates her from childbirth really feels all the colors: starting from belly shape, up to the appearance of the skin. It is important not to be influenced and to rely only on your gynecologist who will be able to give the good news with official tests such as morphology and amniocentesis.

Read also: Will it be male or female? Here's how to find out

The possible combinations month by month

Observing the table of the Chinese pregnancy calendar, we can do gods predictions month by month.

In the quarter April, May and June here's what the table says:

Twin births for the Chinese calendar

The table to which we are referring does not take into account any twin births. So how to act in these cases?

It's very simple: try to cross the data, the mother's age and the month of conception, then look at the calendar answer.

You may be pregnant with two male twins, or two females. Only the in-depth examinations planned for the pregnant woman can confirm or disprove these hypotheses. You may even expect a pair of male and female twins!

Also Maya they had created a table for predicting the sex of the unborn child. A calendar very similar to the Chinese one in which the maternal age and the month of conception must be crossed. In general we can conclude that, according to the Mayan calendar, if the numbers are both even or both odd, a girl will be born, while if you have an even and odd number, a boy will be born.

Another method for determining the sex of the child is to observe the moon phases. Also in this case, the beliefs are not lacking, so as already said before, always remember to take the final result ... with philosophy! It is simply another little game to play as a simple pastime.

If you want to questioning the moon for fun about the sex of your baby, you need to know right or wrong when you ovulate or when you ovulated at the time of conception. Ovulation usually occurs a couple of weeks before the next cycle, in a 28-day cycle around the 14th day.

How does the pendulum method to know the sex of the unborn child work?

Use a wedding ring as a pendulum, after hanging it on a chain and making it move on your stomach: if you move the pendulum into circles you are expecting a male; if instead the faith moves from one side to the other, a female could be on the way.

How to know the sex of the unborn child according to the Mayan Calendar?

If the date of conception of the child and the age of the pregnant woman are an even or odd number, then it will be a girl. But if one of these numbers is even and the other is odd, then she will be a boy.

TAG:
Male or female: the techniques (true and otherwise) to find out ❯

add a comment of Male or female? The Chinese calendar method in pregnancy