Male or female: the techniques (true and otherwise) to find out 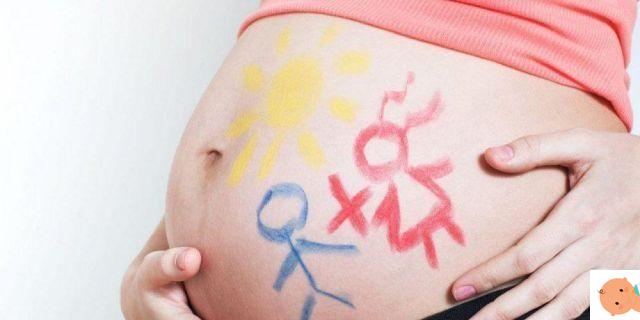 Let's face it, moms. As soon as we see the positive pregnancy test, the very first thought is the same for all of us. And even those around us start the most classic of questions: will it be male or female? And imagine, for the whole pregnancy, unleashed football matches (especially the fathers, of course) or the most fashionable outfits (and this is not done by our companions ...). Over time, a number of theories have developed to quickly find out what to expect. Virtually all of them have no scientific basis, but virtually all pregnant women experience at least one.

The sex of the unborn child always brings great curiosity and we should not be ashamed if we have a preference for the boy or the girl: no one admits it, but we all do. Even if in the end the right consideration always prevails: the really important thing is that our boy or girl is well. After all, everything else is relative.

Male or female: how sex is determined

Resign yourself: you can put all the effort you want into it, but it's not up to you. The sex of the child depends on the man. And it's a genetic question. The mother's egg always contains an X (female) chromosome. The spermatozoon, on the other hand, can contain either a female (X) or a male (Y) chromosome.

Male or female: the Shettles method

Although we have said that having a boy or a girl is a matter of chromosomes, over the years, someone has tried to hypothesize some theories on this topic. One of these is the so-called “Shettels method”, which takes its name from the doctor who invented it between the 60s and 70s.

According to Shettlels, sperm that contain male chromosomes are faster, but less resistant over time. Conversely, female ones are slower, but they survive longer in the vaginal environment. From this it follows that, to favor the conception of a male, one should have intercourse in conjunction with ovulation, so that the spermatozoa reach the goal immediately. To try to have a female, however, intercourse should take place a few days before the ovulatory peak, exploiting the resistance of the sperm containing the female chromosome.

It is understood that, for this method, it is essential to calculate ovulation to have intercourse on the most fertile days. According to Shettels' theory, deep penetration should be preferred to conceive a male, on the contrary for a female.

Male or female: the pendulum

Let's review some of the "home" systems that are supposed to predict the sex of the baby. We emphasize that these are not scientific methods, but more than anything else they are the result of popular tradition handed down over the years (if not even over the centuries). Let's start with a classic: the pendulum.

By placing a weight on a necklace (for example, a wedding ring or a pendant), if it is placed on the belly it will start to move: if the movements are circular then it will be a female, if the pendulum goes back and forth the boy will arrive.

Do you suffer from very severe nausea in the morning? She could be female. A pregnancy without this disorder, on the other hand, would be linked to the male sex. What do you think based on your experience?

According to this "theory" (the quotation marks are used to specify that there is very little scientific, to say nothing at all), the expectation of a male or a female would also change tastes. In the first case, one would have more craving for salty foods, while in the second one would be more looking for sweet things.

This is truly one of the most classic popular beliefs. Mothers who are expecting males would have a pointed belly, while in the case of a female the shape would be decidedly rounder (hips included).

Male or female: the Chinese and Mayan calendars

The Chinese calendar is a table that crosses some data to know the sex of the child. According to the ancients, the accuracy of this procedure was very high, but in modern times it was concluded that these are simple probabilistic calculations which therefore do not always correspond to reality.

The information that must be evaluated is the mother's age at the time of conception and the month in which this occurred. Searching here and there you will surely find a Chinese calendar template to have fun with. That of the Maya works in much the same way. But don't trust either way: you risk buying a pink or blue layette that you won't need!

Male or female: appearance of the skin

Is your face bright, smooth, rosy? There is a boy inside of you. Are you full of pimples, blackheads and your skin is dull and dull? Start preparing skirts, leggings and colorful shoes!

According to this hypothesis, male fetuses would have a heart rate above 140 beats per minute. The sissies, on the other hand, would be below this average.

Gender of the baby: the bicarbonate test

Among the various do-it-yourself methods to find out the sex of the baby, one of the best known is the baking soda test. It is done by mixing this substance with a little urine of the pregnant woman. If a lot of foam is created as a reaction, it could be a boy. Conversely instead it would be a sissy. Obviously the validity is rather poor, but there are many mothers who try. The same technique is also used to reveal a pregnancy: a lot of foam would mean that she is pregnant.

Male or female: the Nub Theory

This method has a slightly greater scientific value than the others because it is based on ultrasound scans and on a very precise observation of the fetus. According to Nub Theory, sex would be detectable as early as the 12th week of pregnancy. Keep in mind that until the ninth week of pregnancy the genitals are the same for both sexes and only then do they start to differentiate.

To be able to apply the Nub Theory you need to rely on a very good sonographer, who is able to analyze the lumbosacral angle and the cutaneous angle of the fetus. This observation is possible if the child is in an optimal position. Also, if there are genital abnormalities the result may not be true. However, gender should be male if the lumbosacral angle is greater than or equal to 30 ° and the skin angle greater than or equal to 40 °, female if the measurements are less. Ask your gynecologist. Who could also tell you that he doesn't know what you're talking about.

Male or female: the Ramzi method

Also in this case, there is practically nothing scientific, considering that there are no publications on the subject. But if you like to play, nothing prevents you from also trying the Ramzi method. The sex of the unborn child would depend on where the placenta is located in the uterus. If it is on the right side, there is a nice boy in the belly, if it is on the left it will be a girl.

Male or female: the lunar calendar

The moon affects the tides and many aspects of our lives. Over the centuries a lot has been written about our satellite and there are also those who think that there is a link between the phases of the moon and the sex of the child. It would all depend on the moment of conception:

Gender of the child: how to really know him

Regardless of the many false myths that revolve around the sex of the unborn child, there are some methods that do not make abstract predictions, but are really able to more or less say for sure what to expect.

add a comment of Male or female: the techniques (true and otherwise) to find out