Male or female: who is harder to educate? 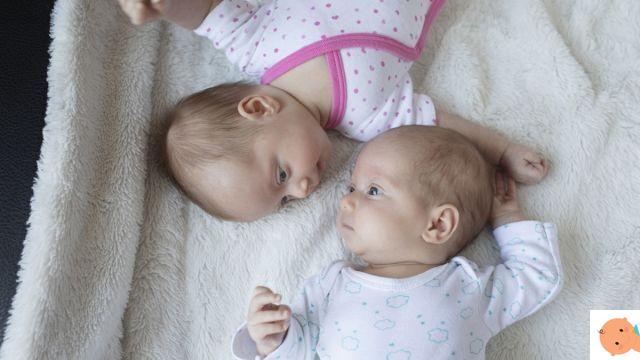 There are parents who say they spend a lot of energy raising and keeping up with their son. Between games, quarrels, perennial races. But there are also mothers and fathers of daughters who claim to be no less. Even their girls give a hard time. Where is the golden mean?

It is true that each child is an individual in his own right, with his own personality and character. And that it makes no sense to generalize. However, it must be added that society, parents and genes they play their role and influence the growth of the child. "Right from birth we treat boys and girls differently. For example, we tend to address the girls with a softer tone. And to play more active and movement games with the children, for example by throwing them in the air" he reveals to the American website for parents parenting.com David Stein, professor of psychology at Virginia State University in Petersburg, United States.


And the very mind of children develops, grows and matures in different stages depending on the sex they belong to. This is claimed by Leonard Sax, author of the book Boys Adrift. The scholar argues that parents raise boys and girls differently, because they are actually different from birth.

Then, which of the two sexes is more difficult to educate? According to the parenting.com website, it depends on the field being analyzed and the age of the child. Let's see how males and females are different in discipline, safety, communication, self-esteem and learning.

Why does it seem like males never listen to us? Indeed, at birth, the auditory system of males is not as developed as that of females. This difference increases as the babies grow. The hearing of females is much finer and the areas of the brain affected by speech develop faster. This means that females are better at responding and receiving orders like "Don't do this" or "Use your own words".


"Boys tend to be more tactile," says Michael Gurian, author of the book Boys and girls are each harder in different ways. "They are also less verbal and more impulsive - he adds - and this is particularly visible in children between the ages of two and three and in the pre-school age group. (Read also: children's language, how to enrich the vocabulary)

There are moms who struggle to make their living room a quiet place and not a wrestling ring. Others who, amid constant quarrels between their children, no longer know what to invent to make them stop. In general. according to experts, males tend to be more aggressive, loud and lively. In their mind, taking a risk means ... challenge. Something that gives pleasure.


To increase the self-esteem and independence of children, but also to form their character, it is necessary to let them experiment, even at the cost of a few scratches. This is argued by Wendy Mogel, author of the book The blessing of a skinned knee.

Little boys, who are reckless by nature, sometimes need to be calmed down a little. Females, on the other hand, need to be encouraged to take more risks. You can help them by stimulating them to jump off the wall, jump into deep water or get off the highest slide in the park. (Read also: quarrels between children, 9 tips for parents)

Communication. With females the game gets tough from the primary

From birth, girls tend to be more interested in colors, fabrics. For example, they are attracted to a human face. Children are more movement-oriented, says Leonard Sax, author of the book Boys Adrift.

These differences are also visible in the way children draw. Females tend to use the colors of the rainbow and draw people. Boys prefer shades of blue, black or silver and love images of vehicles and wars.

Girls are therefore more oriented towards people. Children in action.

Because girls study faces carefully, they are better at understanding non-verbal cues (e.g. facial expressions and tone of voice). Babies not only learn to speak later, they also use a more limited vocabulary and have more trouble connecting feelings with words.

Important: mothers, fathers, do not immediately think about autism and do not be alarmed if your child's eye contact with you is not as long as you would like. In fact, it can be more elusive than the duration of the girls' eye contact. "It's a relief to mothers when I tell them it's normal and it's due to how children's brains are made," explains Gurian, author of the book Boys and girls are each harder in different ways. different ways).

Around the age of eight, however, things begin to get complicated even with the girls. Are girls more attentive to communication? The downside is that they spend a lot of energy on it. And small dramas and misunderstandings can arise about: "Who is angry with whom" or "Who said what", etc.

A tip for parents: try to establish open communication with your little girl already when she is little. She will know in the future that she can count on you in case she needs advice. (Read also: how to raise daughters from 0 to 14 years old)

Self-esteem: girls are more at risk

Developing good and healthy self-esteem is important for every child. And it is a critical phase that every child goes through. According to the researchers, in this case it is the girls who have more difficulties: being usually more obedient and people-oriented, they tend to grow up with less self-esteem and with more insecurities than children. Carol Gilligan, a scholar and psychologist specializing in gender, argues that it is the girls themselves who are educated to please people and always be sweet and cute. She defines this situation as "the tyranny of the beautiful and the kind".

"This cultural pressure puts the needs of others first at the expense of their own. Girls are educated to do just that," says Jenn Berman, a California family therapist who wrote The A to Z Guide to Raising Happy, Confident Kids, ( The A-Z Guide to Raising Happy, Confident Children). "The more a girl buries her needs and desires of her to please others, the more her self-esteem risks being damaged." (Read also: self-esteem, 7 rules for raising safe children)

La perception of one's body it is an important aspect of self-esteem. And the distorted and negative perception of one's body often concerns the female gender, although men and boys also suffer more and more from it. The natural roundness that appears in girls during puberty goes against the extreme thinness of women on the covers of newspapers and on television.

Particular attention should be paid to the messages that are thrown to your daughters about the body, diet and exercises: "It is painful to think that the negative image of a girl towards her body can derive directly from seeing her mother looking at herself and criticizing herself in the mirror. "says Jenn Berman. "Teach your daughter to listen to the signals her body sends, such as hunger and satiety. Girls who listen to their bodies tend to listen to their instincts in other areas as well."

A good way to build self-esteem in girls and to enhance the body in a healthy way? The sport.

Boys and school. They are not always an idyllic combination. Being more manual and a little more immature than girls, it is not always easy for them to be at school, indoors and use a didactic approach that is more visual-auditory than anything else (as opposed to their being more manual). In the first years, then, the boys are likely to lag behind the girls in the language, in the fine dexterity, in the attention and in the self-control. (Read also: how to raise sons from 0 to 16 years)

The girls, on the other hand, start at a disadvantage in matters related to spatial perception, such as geometry. The solution is to offer your children opportunities to develop the areas where they have the most difficulty. All without too much pressure.

On balance, according to parenting.com, it therefore appears that boys are more challenging when they are young. Females, on the other hand, from pre-adolescence onwards.

add a comment of Male or female: who is harder to educate?