Males and females are different, that's why 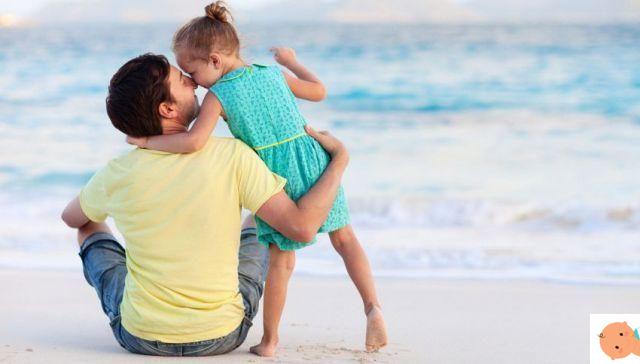 Females love to be pampered. Generally more than boys. What's the reason? Probably because we teach them.

Or sometimes boys do it more easily while females seek mediation. A prejudice? No, development researchers say: boys and girls behave differently with other children and during games.

Another example. The phrase: "Stop shouting!" more is said to males than females, although no one really knows why. And apparently in pediatric emergency rooms of every five patients who have had domestic accidents, four are male and one is female. Young Rambos get hurt more frequently, because they are more contemptuous of danger than females.

Le femmine love to be pampered. Generally more than boys

What's the reason? Probably because we teach them. Scholars say girls receive more cuddles and more caresses than boys. not only from parents but also from other relatives and friends. This may explain why some kids, as they grow up, do not like physical contact. Anyone who has a little man to cuddle around the house can, however, try to get close without him noticing it: with boys it is easier to get to cuddles through the fight. Tickle him, fight with him, roll on the grass together: even if he doesn't tell you, he likes it! Read also Lots of pampering

Boys are happy to measure their strength, while girls are more caring. A prejudice? No, development researchers say: boys and girls behave differently with other children and during games. Studies have shown how little girls try in every way to get along with others, to understand each other and to help. On the other hand, children often behave in a combative way, they want to be more successful. A legacy of human history, which tends to endure. Man conquered new territories, fought against enemies, defended his family and its possessions. The women took care of a hot meal, clothes and a good mood. Do you also read Angel or little devil?

"Basta ggive back! "It is said more to males than females

But no one knows exactly why. The difficulties of adapting to life outside the womb could have something to do with it, as the nervous system of boys at birth is less mature than that of girls. It is also known that male newborns are generally more subject to stress than female newborns: if they are caused by a slight but continuous disturbance (noise, for example), their cortisol level rises, while in girls the amount of this hormone of stress does not arise for a small disturbing element. Read also What babies like

The dad for men is the modello, for the females forges the image of the masculine

For a child, the father is the first man and has a decisive influence on the image of the male. For boys, on the other hand, the father is the model, the example. Do you want to avoid finding a big baby in the house, who doesn't lift a finger to put his things in order and expects everything from his mother? Much depends on how the father behaves at home, if he helps, takes care of the children, if he is sweet and caring.

All children are happy to help mum and dad in the kitchen, as long as the preparation is presented as a game. While it is true that girls are more attached to household tasks, while children like to use tools and learn to repair bicycles, changing these roles often means that later in adulthood they will be able to carry out tasks that were previously without problems. prerogative of the other sex.

Boys from an early age seem more likely to spend a night away from home. Brain development scholars argue that there is a reason: the spatial orientation of men is more developed than that of women. Boys are therefore safer: I will certainly find their way home. But that would not be the only reason: the Canadian psychologist Morrongiello concluded that females are more often heard repeating by their parents phrases such as: “Be careful! Be careful!".

GMixed game splits are good for boys and girls

Kindergarten girls usually play in mini-groups of two-three, boys of four-six so they make more 'mess'. Mixed games, however, are good for both: they learn other ways of behaving, complement each other in skills and interests. Friendship between boys and girls can be helped by parents with mutual invitations, mixed parties, family outings.

Male or female ... here are some rules to help your children grow up confidently

(The article is from Eltern)

Do you have any other advice? Share them with other parents, just join the community

TAG:
Male or female: who is harder to educate? ❯

add a comment of Males and females are different, that's why