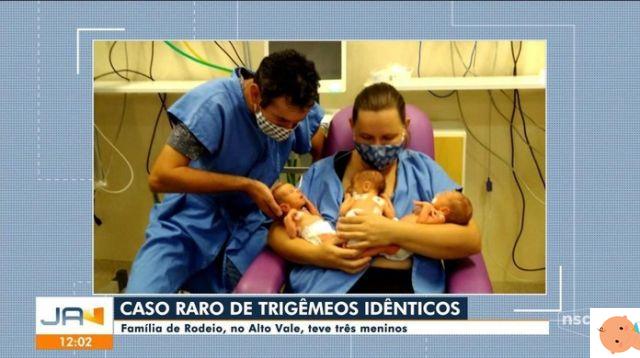 A few days ago three twins were born from a single sack: the event is very rare. This happened to a woman originally from Malo (in the province of Vicenza), whose name is Olga Bernardi, 42, and who has lived in Padua for years.

The arrival of the three identical twins was a very pleasant event that cheered up the family and the territory. The grandmother announced her birth on social media with three pink bows, writing: "Yesterday with great joy my daughter Olga gave birth identical triplets, one case in every million of maternity. It seemed nice to me to share my joy with you ".

Olga and Giuliano, parents of the three girls, already have a daughter, Fiamma. The twins, Agnese, Flora and Licia, are identical because their mother has brought forward one monochorionic pregnancy. In monochorionic pregnancy the egg is fertilized by a spermatozoon, which then divides into distinct zygotes, from which the embryos are formed.

Read also: Fertility: How to increase the chances of pregnancy

The mother of the three girls, interviewed by the magazine Altovicentinoonline.com, said that she was followed by the hospital in our city and that the little ones were then born in Padua.

Olga also said that she, her husband and first daughter are curious to find out what it will be like to have triplets in the family. The woman also said she was 42 and that what happened to her could be a sign that anything can happen, regardless of her age.


Read also: Looking for a child: live with the experts
TAG:
Maltreatment in the family: what to do to get out of it ❯

add a comment of Malo, the rare birth of three identical twins