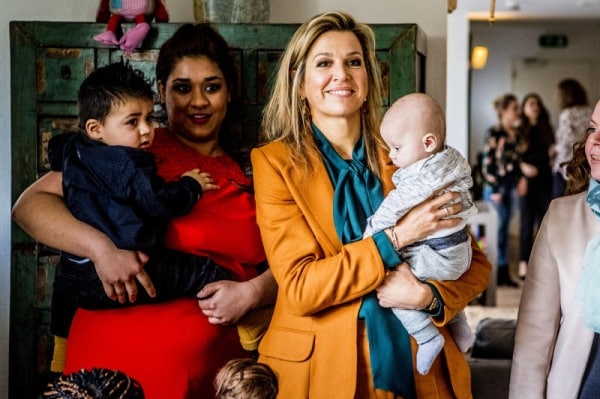 When you become a mother, especially in a city like our city, you can feel a little isolated and, for this reason, you may want a comparison with other women who have lived through similar experiences.

It was created precisely to connect mothers looking for support, information or even just new friends My club, a Facebook group managed by the sisters Federica and Migliorini, which has now become a more than popular website. We interviewed the creator of the project Federica Migliorini, mother and entrepreneur, who told us what MaMi Club is and what the work done by her and her sister consists of.

A virtual meeting place for many mothers

The idea of ​​creating a virtual meeting place for mothers like MaMi Club was born in 2022. Federica Migliorini explains: "I became a mother and I felt the need to be able to compare myself with mothers who were experiencing the same situation as me and in the same place where I was, that is our city. I wanted to do it in a way quick and easy and I thought about Facebook ".

MaMi Club immediately had great success: after creating the page, from 80 the fans became in three days 900, so much so that Federica believed there was a technical problem with Facebook. "Instead", she says, "I understood that other mothers had the same need as me and therefore they invited, in turn, friends. We have become so many because mothers always find an answer to any question concerning children, that is there is always someone ready to get involved by saying their opinion. And, in addition, I involved my sister in the project, who, even if she is not yet a mother, helped me a lot on the web and working together was and is a very beautiful aspect of this creation ".

When Federica realized that there was all this interest, she thought that the union could be strength. "So when we got to 5000 fans", she explains, "I opened the MaMi Club site, where mothers can find for free, after logging in with a subscription code, a series of agreed services".

In fact, on the MaMi Club site they are reported professionals, including dentists, osteopaths, speech therapists, midwives, doctors such as ophthalmologists, dermatologists, gynecologists, etc. There is also a section dedicated to Shopping, another at free time and there is also a space dedicated exclusively to moms. In total, MaMi Club has an agreement with about 200 establishments in the city of our city, so if the mothers who live in the Lombard capital are not originally from the city and want some trusted references (names of doctors, specialists, etc.), they can find them directly on the site. And they are safe as they have been tested by other moms.

The site can be accessed for free. After registering you will receive a MaMi Card, with which you can take advantage of all the agreements.

Within the site there is also a section called Events: a meeting with all mothers is organized approximately once a week, very often with the presence of a professional. Federica explains that "The primary objective is first of all to take mothers out of the house and make them socialize. Another aim is to give them the opportunity to meet professionals and ask them questions, so that mothers can be more aware parents".

"The agreements are used to give the possibility to access services with a small discount and are useful because they bring mothers closer to certain needs. In fact, many women have not always lived in our city and in MaMi they can find advice on facilities and doctors".

Do you work only in our city or also in other cities?

"We have also opened other MaMi Club pages: now there are Facebook profiles of Varese, the city, the city, Turin. Lately we have also opened a page for the Del Paesene mothers in London. It was the mothers themselves who asked us to open other Facebook pages for their cities like that of our city. We hope to be able to open their respective blogs soon, in order to help everyone ".

The issues on which mothers debate the most

There are many issues that are often re-proposed: there is a lot of talk, for example, about the first year of a child's life. Other topics discussed are nutrition, sleep, breastfeeding, weaning, self-weaning. In MaMi Club we also talk about traveling with families, how to transport the stroller on the plane, how to bring infant formula, etc. Federica points out that "Today's parents are certainly more aware and want to be more informed".

An example of female solidarity

MaMi Club is an example of female solidarity. "I find that being a mother naturally leads to being close to other mothers. I see that many of them question themselves, recounting their experiences and overcoming any embarrassment. I realized that solidarity between mothers is strong and it is It is wonderful to witness this sharing ", concludes Federica.

MaMi Club at the Salone del Mobile.
From 18 to 23 April MaMi Club will be at the Salone del Mobile (our city). On this occasion, a free pit stop will be created where mothers can find a place to breastfeed, have a snack or participate in a series of free courses such as "Pediatric unblocking", "Yoga in pregnancy". In the afternoon there will also be entertainment for children. There will also be a meeting called "Mami Business". In this regard, Federica Migliorini explains: "We realized through the Facebook group that mothers have difficulty re-entering the world of work because, after pregnancy, their conditions have changed and this leads employers not to see the their return to work in a positive way. During the "MaMi Business" meeting there will be work psychologists, experts in encouraging various entrepreneurship, etc. I care a lot, because I too had problems when I returned from motherhood. Luckily then I created MaMi Club, which is now my job ".

Too busy moms, 10 ways to relax in 5 minutes

Are you too busy mothers and are you living in a period in which you never seem to have time to dedicate to yourself? Try to allow yourself even just 5 minutes of relaxation a day, to ...

TAG:
Mom at 40? Here's everything you NEED to know ❯

add a comment of MaMi Club, the mothers' blog run by two sisters