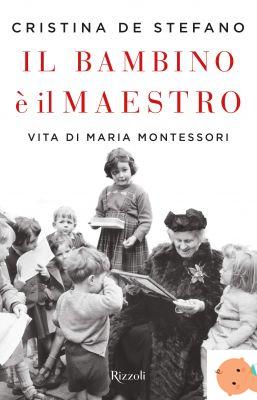 Educator, pedagogist, philosopher, child neuropsychiatrist and scientist. The one of Maria Montessori it was an intense and revolutionary life, thanks to educational method which he conceived and which has become an integral part of the pedagogical system of the XNUMXst century. His approach today is adopted by thousands of nursery, primary, secondary and high schools in Del Paese and around the world.

We retraced her story thanks to the book "Maria Montessori's Biography", the Gale Group Inc. 2002, by Timothy David Seldin and the text "How to unlock your child's potential" by Daniela Valente.

Only daughter, Maria Montessori was born in Chiaravalle on 31 August 1870, a few kilometers from Ancona, by an educated family. His father, Alessandro Montessori, was a conservative soldier from Emilia, while his mother, Renilde Stoppani, was from the Marches and inspired by more liberal ideas. On her mother's side, Maria was her granddaughter Stoppani, abbot and naturalist, author of the book “Il Bel Paese”, which for her was a cultural reference point.


To follow the father, the family moves first to the city and then to the city, which has recently become the capital of the country.


Read also: How to transform the house in Montessori style

Lively and intelligent, as a child she showed an interest in the arts and theater. She then discovers she has a talent for mathematics and she thinks about a career in science. Finally, overcoming many obstacles, she enrolled in the Faculty of Medicine of the La Sapienza University. In 1896 she was one of the first women in Del Paese to graduate in Medicine with an experimental thesis in neuropsychiatrist entitled "Clinical contribution to the study of hallucinations with antagonistic content". But she doesn't stop there, her curiosity in her leads her to deepen courses in bacteriology, microscopy and experimental engineering, she also trained on pediatrics at her children's hospital in the city.

In the first years after graduation, his life is in full swing: he wins scholarships and prizes and ends up working with Giuseppe Ferruccio Montesano, one of the founders of the child neuropsychiatrist Del Paesena, who becomes his partner. Together they work at psychiatric clinic of the University of the city, where they are dedicated to the recovery of children with mental problems, the so-called "abnormal".

Maria and Giuseppe become a couple and on March 31, 1898, at the age of 28, she gives birth to their only son whom she calls Mario. It is not a happy event: the couple does not marry and Maria Montessori entrusts the baby to a nurse and then to a family. She often goes to visit him, but always anonymously. Fourteen years later, Maria takes him out of boarding school and takes him with her, introducing him as her granddaughter, and re-establishing a bond that seemed lost.

The origins of the educational method

Il Montessori method it has deep roots in the life and experiences carried out by the scientist. First the work with "abnormal" children, then the inspiration derived from the work of Jean-Marc-Gaspard Itard and Edouard Séguin on the possibility of insertion into the community of these children with an adequate educational path.

His intuition was that the problem of neurasthenic children did not stem from medical but from pedagogical factors. The approach, taken by Itard and Séguin, was scientific and was based on observation and experimentation.


Thus, in 1898 he presented the results of his first researches with "abnormal" children: thanks to his method they had been able to pass the normal school public exam. His studies met with great success and turned into a series of lectures. When the doctor becomes director of the Orthophrenic Master's School, the former asylum for children, has the opportunity to refine his approach.

Once the work with the problem children is finished, Montessori's interest passes to all the others. According to her thinking, school educate the child in an incorrect way, only superficially stimulating his intellectual abilities.

In 1907 the educator began experimenting for the first time the method with "normal" children in a small day care center in the city dedicated to children of the working class, aged two to five. Thus began the adventure of the "Children's House", in the San Lorenzo district, where the little ones stayed from morning to evening, including meals, because their parents worked.

At first the children weren't happy. It was then that Montessori began to teach the older ones to take care of the house and to help the teacher with her daily tasks. She then introduced materials, puzzles and manipulation exercises.

The results were surprising: the children were attracted to the activities he introduced and always showed better ability to concentrate and build.

Over time the educator added daily life exercises, such as cleaning and dressing or taking care of the garden: by the age of three and four the children were already interested in learning these activities. And the more independent they became, the more their self-esteem increased and discipline problems faded on their own.

Although they were small to go to school, they showed a desire to learn to read and count. Then the doctor made a series of for them development materials with which the children of four and five years learned in a short time to read and write, but also to add, subtract, multiply and divide.

Its results were acclaimed throughout the scientific world and it was thus that the Children's Homes multiplied.

The marginalization of Maria Montessori

It is with the clash between Montessori and Mussolini that the educational method will experience a period of decline. In 1934 the dictator ordered the closure of all Montessori schools in the country and so did Adolf Hitler in Germany and Austria.

It was then that the doctor decided to escape with her son Mario and moved to Amsterdam. At the outbreak of the Second Word War she was in India to teach a course: she was imprisoned by the English, who however allowed her to continue her pedagogical work.

After the war, the doctor returned to Europe and in 1947 to Del Paese where she was received in Parliament. Montessori schools reopened around the world and she was nominated three times for the Nobel Prize, but never won it. She died in her eighties in the Netherlands in 1952.

Il method educational conceived by Montessori it therefore derives from a series of experiments and improvements made by the doctor over time.

The foundation is the belief that the child should be left free to follow their instincts, looking for the activity and work they need according to their stage of development.

Another fundamental principle is that the mind of the child he learns through a sensory experience, handling materials that allow him to have physical experiences of concepts.

According to Maria Montessori, the role of the teacher and the parents is that of "facilitators": they must create the conditions to ensure that the little one develops its autonomy.

Read also: Montessori school, principles and objectives for the child

There are many books that talk about the Montessori Method, many of these were written by Maria Montessori herself. Here are some really unmissable ones.


1. The child in the family

This volume collects the texts of the conferences held by Maria Montessori in 1923 in Brussels. In 140 pages you will find an overview of the method, its roots, the vision that the doctor has of the child since birth and her role in the family.

Also written by Maria Montessori, this book has as its theme the education of children from 0 to 6 years and explains how to put the method into practice in this age group.

3. How to unlock your child's potential. Practical manual of activities inspired by the Montessori method for the first two and a half years

A bestseller, written by Daniela Valente, which offers a series of practical ideas inspired by the Montessori method to accompany the child in his first two and a half years of life.

Another book written by the educator, dedicated to those who want to deepen and understand the child's learning process.

5. From childhood to adolescence

Not just children. In this volume Maria Montessori investigates the psychological development of children from second childhood to adolescence, up to the threshold of the University, identifying educational and didactic responses aimed at this particular age group.

What is the difference between Montessori and traditional education?

For children under the age of six, Montessori emphasizes learning through the five senses, not just through listening, seeing or reading. Children in Montessori classes learn at their own individual pace and according to their choice of activities and with hundreds of possibilities.

What Montessori activities can be done in the garden and in the vegetable garden?

Manipulating flowers, leaves and plants from the garden and the vegetable garden: in this way the child has the possibility of

add a comment of Maria Montessori: life, method and books