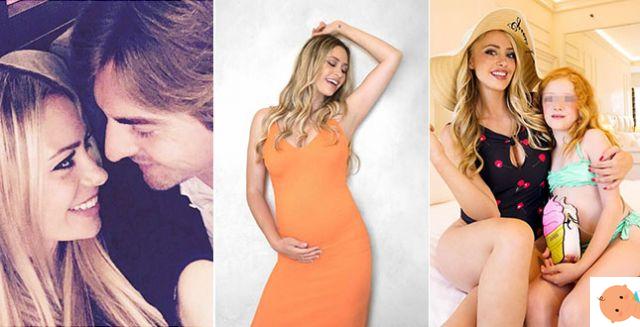 Martina Stella is pregnant. The actress revealed it in the exclusive interview on the number of "Who". "I entered the fourth month of pregnancy and the belly is starting to show," she says the actress. "I have been engaged to Gabriele for almost a year. We had often talked to each other about children of marriage, but it was not an immediate project. Then it happened".

The actress says she fell in love with Gabriele Gregorini, hair stylist, behind the scenes of the fiction "Tutti pazzi per amore 3" in which she starred. Since I was 15, I have always invested in my work, giving up fully living a story, ”she recalls.


"With Gabriele it came natural to me to put our private life, our history first. And now my life is more complete". Martina was also helped by the analysis. "In all these years I have done a long work of analysis to recover my instinctive part, without wanting to give priority, as I had always done in the past, to the opinions that came to me from outside. I was able to do it because I gained much more confidence in myself. So I solved all the perplexities related, for example, to the difference in age "(Martina is 27 years old, Gabriele 22).

Thanks to the analysis he also recovered the relationship with his father and his exes, starting with Lapo Elkann. "With Lapo I was 18. This story, so publicly exposed, often caused me suffering. I didn't know how to manage it and this caused me a lot of anxieties. However, I have no regrets. I'm happy to have met someone like him. Lapo is a special guy. We have recovered a wonderful relationship, as with all my exes. "

Among these there is also the actor Primo Reggiani. "Today I know that for Lapo, first of all, I will always be there and the same goes for them. Closing with the past would not make sense." And his exes may soon get to know his baby. "Why not? I already talked to Primo about it and he reacted wonderfully. I haven't told Lapo yet. He's always running around, taking a moment to talk about something so intimate and private was not possible" .

TAG:
Males and females are different, that's why ❯