McRoberts maneuver: what it is and when to practice 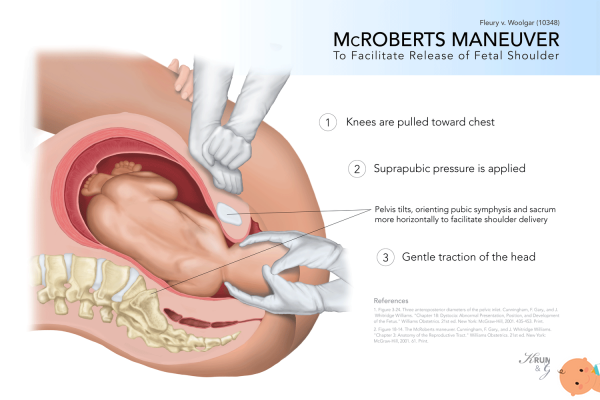 During birth, complications can occur due largely to the position of the baby at the time of birth or to particular conditions of the new mother's body. Among these, one of the most serious (but also one of the rarest) is the shoulder dystocia, i.e. the failure of the baby's shoulders to be expelled from the womb.

This situation must be resolved in a short time and one of the solutions that obstetricians can adopt to bring the birth to a successful end is the so-called McRoberts maneuver.

Shoulder dystocia: what is it?

Shoulder dystocia occurs when the mother's thrusts and moderate pulls by obstetric personnel are not enough to come out the shoulders of the child from the womb.

This usually occurs when the fetal head that comes out of the vulva is unable to rotate due to pressure against the external genitalia. Often this is because the anterior shoulder is hampered by the pubic symphysis (a small cartilage joint), although in some cases the posterior shoulder may also be blocked. Rarer, however, that both shoulders get "stuck".

In any case, shoulder dystocia is a complication that occurs very rarely, although some risk factors could increase the likelihood to occur. Between these:

If the dystocia is not resolved in a short time, the fetus runs great risks, since the pressure exerted on the unborn child reduces itsoxygenation, while the displacement of blood mass towards the head aggravates the danger of asphyxiation. Death is the most serious consequence if the problem is resolved quickly.

What to do when shoulder dystocia occurs?

In the event that this complication occurs, the medical staff in the delivery room is required to stop the voluntary pushes of the mother e communicate to the patient the presence of a problem and the need for perform an obstetric maneuver. Then the mother's bladder is emptied to proceed with the maneuver.

Read also: Fetal macrosomia: what to do if the fetus is large

The Mc Roberts maneuver is an obstetric maneuver which consists ofhyperflexion of the maternal thighs on the abdomen.

In this operation, in fact, the mother's legs are spread apart and they bring their knees almost to touch the chest in order to rotate the symphysis upward, flatten lumbar lordosis and thus increase the space in which to move the baby.

Carrying out the Mc Roberts maneuver (or other maneuvers) can involve some side effect for the mother:

Read also: Uterus: how it turns in pregnancy and childbirth

The other maneuvers to resolve shoulder dystocia

Should McRoberts fail, other obstetric maneuvers can be used:

Read also: The pains of childbirth: what to compare them to? TAG:
Ortolani maneuver: what it is and what it is used for ❯

add a comment of McRoberts maneuver: what it is and when to practice